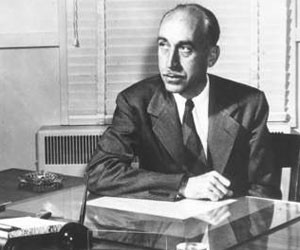 Dr. Eckart was an American physicist, physical oceanographer, geophysicist, and administrator. He co-developed the Wigner–Eckart theorem and is also known for the Eckart conditions in quantum mechanics, and the Eckart–Young theorem in linear algebra.

In 1941, Eckart was called upon by B.O. Knudsen, the director of the newly formed University of California Division of War Research to help develop methods of optical and acoustical detection of submarines for the US Navy. Eckart, an Associate Professor at University of Chicago at the time, took leave to work on the problem.

In 1946, he officially resigned his position at the University of Chicago to become a Professor of Geophysics at Scripps Institution of Oceanography, a position he held until 1971.  Also in 1946 Dr. Eckart, Roger Revelle and Admiral Rawson Bennett founded the Marine Physical Laboratory to conduct geophysical research of common interest to the academic and naval communities.

Eckart contributed to geophysics by lining theoretical hydrodynamic exercises to actual physical properties of water.  In the following decades he did research on thermal layering in the ocean and atmospheres, the transmission of sound in the sea, turbulence, air-sea interactions, the generation and structure of surface, and internal ocean waves.

After WW II, Eckart collected his work and the work of others on underwater detection and published it a classified volume entitled Principles and Applications of Underwater Sound, which was first published in 1946. It was declassified in 1954 and reprinted in 1968.

From 1957 to 1959, Eckart was a member of the Editorial Advisory Board for the Johns Hopkins University Applied Physics Laboratory’s series on applied mathematics and mechanics, and from 1965 to 1967, he was Vice-Chancellor for Academic Affairs at UC San Diego.  He then served the University of California from 1967 to 1968 as alternate representative to the Institute for Defense Analyses, a 12 university organization that functioned as an independent source for studies and advice for the Department of Defense. 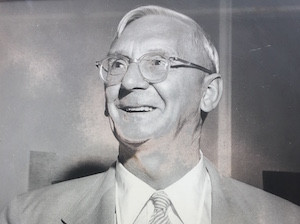 Sir Charles Seymour Wright was a member of Robert Falcon Scott’s Antarctic expedition to of 1910-1913, the Terra Nova Expedition, serving as the expedition glaciologist and assistant physicist.  During which, He was one of four expedition members who explored and mapped the western mountains of Victoria Land.  He was not chosen to accompany Scott on the final push to the Pole, and was sent back to help the rest of the expedition navigate the 580 miles back to Cape Evans where they would wait for Scott’s party to return from the Pole.  Scott never arrived, and on 12 November 1912, it was Wright, as a member of the 8-man search party, who first spotted the tent containing the bodies of Scott and his contingent who all perished on their return trek from the South Pole.

After the tragic expedition, Wright returned to England and lectured in cartography and surveying while writing up his scientific work from the Terra Nova Expedition.

In 1914 he joined the Royal Engineers as a second lieutenant and served in France. After a distinguished career in the First World War, during which he helped develop trench wireless and gained the Military Cross and the Order of the British Empire (OBE), he joined the Admiralty Research Department in 1919. During World War II he played an important role in the early development of the Allied radar system and developing devices to detect magnetic mines and torpedoes.  He was knighted for his work in 1946.

Also in 1946 he was appointed First Chief of the Royal Naval Scientific Service, and came to the United States as scientific advisor to the Admiral at the British Joint Services Mission in Washington DC.  Wright became the Director of the Marine Physical Laboratory in 1951 and served until 1955 when he joined the Defense Research Board of Canada’s Pacific Naval Laboratory. 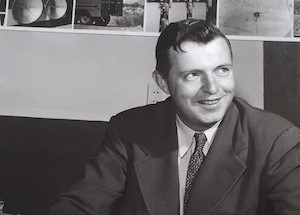 Alfred B. Focke, a research physicist with a Ph.D. form Caltech, served in a civilian capacity for the Navy Bureau of Ordnance during World War II. After the war, Dr. Focke worked in various capacities at the Navy Electronics Laboratory in San Diego. In 1954 he became Scientific Director of Operation WIGWAM, the project that detonated an atomic bomb under the Pacific.  After serving as Director of MPL, Dr. Focke went on to become the Chief Scientist at the Point Mugu Naval Pacific Missile Test Center. 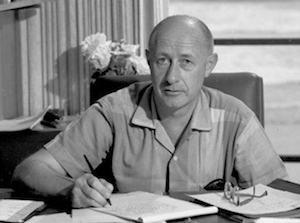 Dr. Fred Spiess, a world-renowned deep-sea ocean explorer and inventor was widely known for his contributions to the development of innovative ocean technology. He designed and built instruments, took them to sea for deployment and led numerous expeditions to investigate the deepest parts of the world's oceans. He was co-inventor of the one-of-a-kind research vessel R/P FLIP, the Floating Instrument Platform.

He was born in Oakland, California, received an undergraduate degree from the University of California, Berkeley, a master's degree from Harvard University, and his his doctorate in physics from UC Berkeley in 1951.  In 1965 Dr. Spiess was awarded the John Price Weatherill Medal, and in 1985 the Maurice Ewing Medal.

Dr. Spiess joined the Marine Physical Laboratory at the Scripps Institution of Oceanography in 1952 and served as Director of the laboratory from 1958 to 1980. He served as Director of the Scripps Institution of Oceanography from 1964 to 1965.  He was a seagoing scientist who led an average of two expeditions a year for more than 40 years. 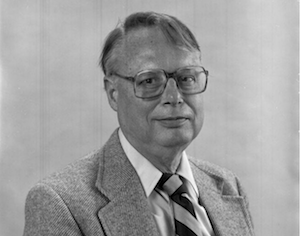 In 1943 Dr. Watson started his career at the the Naval Research Laboratory in Washington D.C. Then in 1948, Dr. Watson became a postdoctoral fellow at the Institute for Advanced Study.  It was there that Robert Oppenheimer introduced Dr. Watson to Edward Teller, which led to a postdoctoral position at UC Berkeley at a time where the environment was being dominated by high energy experiments and experimental studies of pi meson production, scattering and absorption.

In 1958, Dr. Watson went to Geneva, Switzerland to attend the State Department negotiations for the Test Ban Treaty to ban nuclear weapon tests in the atmosphere, in outer space and underwater. Then in 1959, he became an early member of JASON, an independent group of scientists who advise the United States government on matters of science and technology, mostly of a sensitive military nature.  During the 1970s, 1980s and 1990’s he was a member of the Navy’s Planning and Steering Advisory Panel.

Dr. Watson served as a member of the President’s Science Advisory Committee Military Panel for Presidents Eisenhower, Kennedy and Johnson. Then as a consultant to the National Security Council during the Nixon administration. 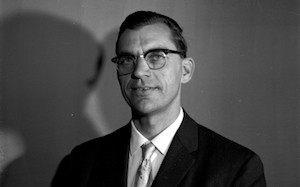 Victor Anderson was born in Shanghai, China in 1922 to missionary parents and didn’t return home until he was 9 years old. In 1943 he entered graduate school at UC Berkeley, where he was invited to join the Manhattan project. At the end of World War II he became interested in underwater sound and enrolled at the University of California, Los Angeles as a graduate student in physics in 1946.

After a year in residence at UCLA, he joined the Marine Physical Laboratory, where he and his colleagues dreamed up and constructed sonar instruments that played a major role in anti submarine warfare.  His research at MPL in the study of the deep scattering layer completed the requirements for a Ph.D., which he received in 1953. Dr. Anderson never really figured out which he liked better, solving tough theoretic underwater acoustics puzzles or building ingenious electronic sonar gizmos, so he did both.

In 1986 the National Security Industrial Association awarded Dr. Anderson the Admiral Charles B. Martell Technical Excellence Award for his work in the development of the DIMUS system.  He also received the Navy’s 1976 Distinguished Public Service Award.

Dr. Anderson was a fellow of the Acoustical Society of America (ASA), a senior member of the Institute of Electrical and Electronic Engineers (IEEE), and a member of the National Research Council Committee on Navy Publications. 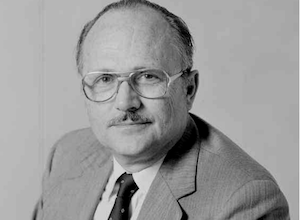 In addition to being a researcher, he served as Vice Chairman of the Scripps Staff Council, and in 1975 he initiated the push to preserve and restore the first building erected on the Scripps La Jolla campus back in 1910.  The George H. Scripps Memorial Marine Biological Laboratory building was listed in the National Register of Historic Places in 1977 and became a National Landmark in 1982.

Dr. Fisher received the Institute of Electrical and Electronics Engineers Millennium Medal Award in 2000 and the IEEE Distinguished Technical Achievement Award in 1996.  He served as the Editor-in-Chief of the IEEE Journal of Oceanic Engineering from 1988 to 1992 and received the Distinguished Service Award of the IEEE Oceanic Engineering Society in 1991. He also served as President of the Acoustical Society of America in 1983-84 and as a member of the Governing Board of the American Institute of Physics from 1985-1991. 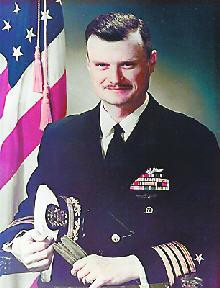 Charles Bishop graduated from the U. S. Naval Academy on December 19, 1941, and spent most of his life at sea in ships and submarines.  He served as both Executive and Commanding Officer of numerous ships, and on the staffs of the Office of Naval Research (ONR), the Chief of Naval Operations (CNO) and Naval Material Command (NAVMAT) in undersea R&D positions. His final tour was as Commanding Officer of the Naval Undersea Center on Point Loma.

As a graduate student at UCLA, Bishop worked in the summer at Naval Electronics Laboratory, San Diego with the group that developed the special sonar that made it possible for submarines to operate under the Arctic ice pack. A few years later he came back as Commanding Officer of the experimental submarine USS BAYA and helped Scripps Oceanography scientists conduct underwater gravity measurements off San Diego.

While working for the Chief of Naval Research, Bishop arranged for the evaluation in Italy of the bathyscaphe TRIESTE as a vehicle to support undersea research. TRIESTE was later based in San Diego for years and helped establish San Diego as a center for undersea research and development.

Years later under the Chief of Naval Operations, Bishop arranged for the transfer of TRIESTE from San Diego to Portsmouth, New Hampshire to conduct the successful search for the lost submarine USS THRESHER. This event marked the beginning of the Navy's Deep Submergence Program, Submarine Development Group and the creation of it’s submarine rescue capabilities.

After retirement he served as the Assistant Director of the Marine Physical Laboratory for 15 years. He received the Roger Revelle Award in 2002 for his contributions to Ocean Science, and was a member of the Marine Technology Society since 1965, and served as it’s San Diego Chapter Chairman. Captain Bishop was also a member of the San Diego Ocean Foundation since 1985, and served as it’s Chairman of the Advisory Board. 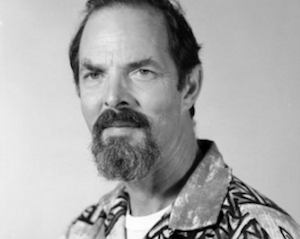 George Shor Jr. graduated from Caltech in 1944 with a degree in mechanical engineering, and served as an Naval electronics and communications officer in the Pacific.  He remained in the Naval Reserve until his retirement as a commander in 1983. After the war, Shor returned to Caltech for graduate work in geophysics and then joined Seismic Explorations Inc. where he prospected for oil in New Mexico and West Texas.  In 1951, he returned to Caltech to do graduate studies with earthquake expert Charles Richter, receiving his degree in 1954.

Dr. Shor joined Scripps in 1953 at the beginning of what researchers have dubbed the golden age of oceanography, where his study of the ocean floor laid the ground work that eventually led to the theory of tectonic plates and continental drift. He helped develop the United States' fleet of ocean-going research vessels, was a principal in the abortive Project Mohole to drill a hole deep into the Earth and played a key role in the creation of the California Sea Grant program, which funds marine and coastal research. 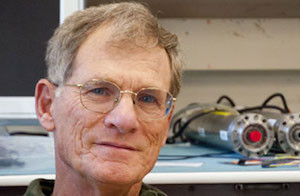 Pinkel has played a central role in the development of acoustical oceanography through his pioneering contributions to acoustical Doppler methods for oceanographic measurement and his subsequent use of Doppler techniques for the study of internal waves, mixing, and related processes in the upper ocean.

Pinkel is a fellow of the American Geophysical Union, and The American Meteorological Society awarded him with the Henry Stommel Research Award.