For Renowned Scripps Oceanographer, 2011 Was a Rewarding Year 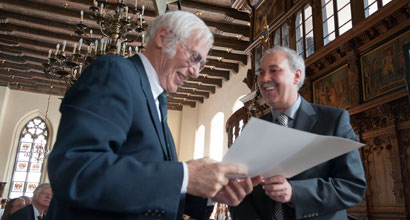 For Renowned Scripps Oceanographer, 2011 Was a Rewarding Year

In May, Germany’s University of Bremen, where Berger had served as a guest professor for nearly 20 years, awarded an honorary doctorate to Berger. In fall the European Geosciences Union (EGU) announced that Berger would receive the 2012 Milutin Milankovich Medal.

“Milutin Milankovitch is one of my heroes, but he is not everyone's idea of a role model,” said Berger. “He explained things about climate change that had not been observed or documented in his time, and he did so with a strong sense of purpose, without much regard to the criticisms leveled against his studies, criticisms by well-known geologists at the time. It was his good fortune that his ideas proved mainly correct, many decades later, and those of his many critics proved wrong.”

Since receiving his doctorate from Scripps in 1968, Berger’s research has touched on multiple disciplines ranging from geology to climate studies to plankton ecology. His work on the selective preservation of calcareous fossils on the deep-sea floor had wide-ranging implications and ramifications for the understanding of the carbon cycle in the sea, and its link into climate variations. In addition to his studies, Berger is the author of the widely used textbook The Sea Floor and a popular book, Walk along the Ocean, about the shoreline of San Diego’s North County and is widely credited as an ambassador of science.

“He has made a particularly outstanding career in outreach and scientific communication by explaining scientific thinking, scientific concepts and results to all sorts of audiences from children to policy makers through books, lectures and essays,” said the EGU.

Berger’s Milutin Milankovic Medal citation states that it was awarded to him “for his pioneering contributions to understanding the imprint of orbital forcing on the marine carbonate system and its interaction with atmospheric CO2 concentration and for his groundbreaking studies on isotope geochemistry.”

In 1971, Berger rejoined Scripps. He served as chair of the Geosciences Research Division in 1994-1996. He stepped down from that position when he was named interim director of Scripps in September 1996. He held that position until December 1997 when Charles Kennel was appointed Scripps director.

In January 1998 Berger was appointed director of the California Space Institute, a statewide education and research center at UCSD. In this position, he oversees basic and applied research in many interdisciplinary, space-related fields at UCSD and other UC campuses.

The Solana Beach resident will receive the Milankovich Medal in April at the EGU General Assembly. The award is named for Milutin Milankovich, a 20th Century Serbian geophysicist whose work established the relationship between Earth’s climate throughout history and periodic fluctuations in its orbit.