Increasing numbers of gray whales migrating closer to shore could put whales at risk for ship strikes, entanglements, and pollution 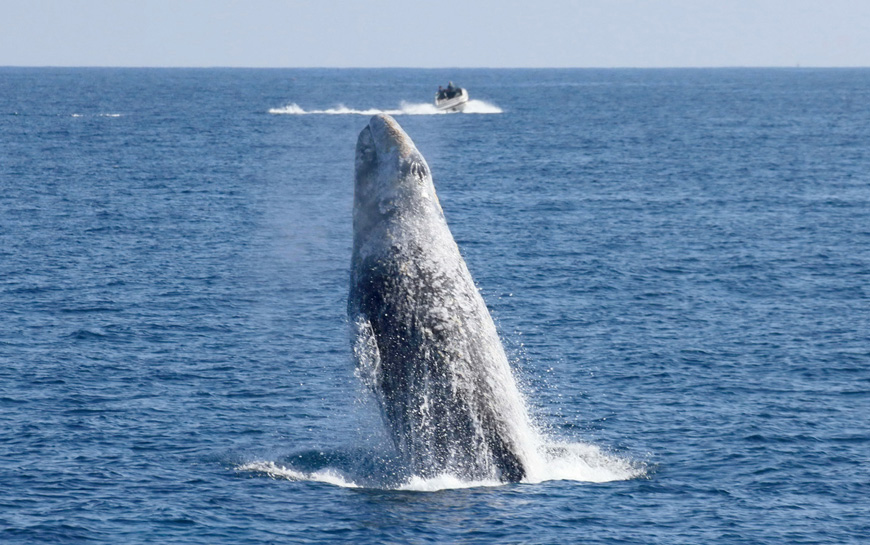 
A new study led by researchers at Scripps Institution of Oceanography at the University of California San Diego has detected changes in gray whale migration routes off the coast of Southern California. Researchers found that the proportion of Eastern North Pacific gray whales migrating nearshore has been increasing in recent years, placing whales closer to potentially harmful human activities.

In the same study, researchers also found that the annual gray whale migration seems to be aligned more with the whales’ biological clockwork than with environmental factors such as warming ocean temperatures or the decreasing amount of Arctic sea ice.

Scripps Oceanography alumna Regina Guazzo led the study, published Aug. 29 in the scientific journal Marine Ecology Progress Series. She conducted the research for her dissertation while a Scripps PhD student.

To conduct this study, Guazzo and other scientists with the Scripps Whale Acoustic Lab analyzed acoustic and visual census data collected during seven migration seasons along the Southern California Bight—an offshore region that extends from San Diego to Point Conception. Mortality rates for whales in the Southern California Bight have been on the rise in recent years, and researchers are trying to pinpoint why.

Guazzo said that as whales move closer to shore and travel through busy shipping ports, they face a greater risk of having negative interactions with humans and their technology. Potential impacts include ship strikes, entanglement in fishing gear, noise pollution from marine traffic, and chemical pollution from urban runoff.

“More gray whales than usual stranded along their migration route this past year and long-term studies like this one can help us understand why this is happening,” said Guazzo, now a scientist with the Environmental Readiness Branch at the Naval Information Warfare Center Pacific. “This research can help us understand what affects the gray whale migration, which can help policymakers make informed decisions about how to best protect and monitor this species.”

Gray whales make an annual migration from the cold Arctic seas where they feed on small, bottom-dwelling crustaceans in the summer to the warm Pacific lagoons off Baja California, Mexico where they mate, give birth, and spend the winter. Previous migration surveys have shown that the majority of gray whales passing through the Southern California Bight move away from the coast, migrating far offshore near the Channel Islands. But this new study shows that a growing number of whales are migrating much closer to the coastline.

Researchers discovered this increase in nearshore migration by looking at counts of gray whale calls recorded by a hydrophone—an underwater microphone—placed offshore near the Channel Islands from 2008-2015. They compared that acoustic data with counts of whales sighted from shore-based locations in Santa Barbara and Los Angeles during the same time period. Visual observations were collected by the American Cetacean Society - Los Angeles Chapter and Gray Whales Count, a research and education project to count whales based in Santa Barbara.

Separately, the researchers also compared the visual and acoustic data from the same seven year period with concurrent environmental measurements taken from satellites and CalCOFI cruises. They did a statistical modeling analysis and tested different variables that could impact whale migration including calendar day, time of day, sea surface temperature, and freeze timing of sea ice in the Arctic. They found that the best model of whale counts included the timing variables, but not the environmental variables.

The scientists said this evidence led to the conclusion that the timing of the migration seems to be cued more by the whales' biological clock than the environmental elements tested.

“This finding was surprising because I expected the whales to start migrating once their feeding area was covered by ice,” said Guazzo. “If gray whales migrate based on a calendar day and not based on the environment, then they could be migrating south before they have had enough to eat.”

She noted that gray whales, and many baleen whales, fast for most of the year while they are migrating and in their wintering areas. If they migrate in the fall without having enough fat to help them last until the following spring, this could result in whales starving.

Guazzo said an important next step for this research would be to do a long-term study of the whales’ primary food source in the Arctic, small benthic amphipods—creatures that will be directly impacted by the reduced ice and earlier spring melts in the Arctic due to climate change. Since gray whales directly depend on these animals for their survival, understanding their abundance and how it relates to the gray whale population and migration is needed.

Acoustic data collection for this study was supported by grants from the U.S. Army Corps of Engineers using funds provided by the U.S. Navy’s Pacific Fleet through the Cooperative Ecosystem Studies Units. Guazzo’s graduate program at Scripps was funded through the SMART Scholarship (Science, Mathematics, and Research for Transformation), a Scholarship-for-Service Program with the U.S. Department of Defense.

Guazzo also led another recent study on gray whales, published Aug. 30 in the journal Scientific Reports. She worked in coordination with NOAA’s Southwest Fisheries Science Center to show how different automated methods—acoustics and infrared—can be used to sense and potentially count gray whales as they are migrating. Since the acoustic data indicate that more whales than previously estimated may be migrating before NOAA researchers start their visual census, visual observers will be starting a month earlier this year and in 2020 to make sure they have the most accurate population estimate.


About Scripps Oceanography
Scripps Institution of Oceanography at the University of California San Diego, is one of the oldest, largest, and most important centers for global science research and education in the world. Now in its second century of discovery, the scientific scope of the institution has grown to include biological, physical, chemical, geological, geophysical, and atmospheric studies of the earth as a system. Hundreds of research programs covering a wide range of scientific areas are under way today on every continent and in every ocean. The institution has a staff of more than 1,400 and annual expenditures of approximately $195 million from federal, state, and private sources. Scripps operates oceanographic research vessels recognized worldwide for their outstanding capabilities. Equipped with innovative instruments for ocean exploration, these ships constitute mobile laboratories and observatories that serve students and researchers from institutions throughout the world. Birch Aquarium at Scripps serves as the interpretive center of the institution and showcases Scripps research and a diverse array of marine life through exhibits and programming for more than 430,000 visitors each year. Learn more at scripps.ucsd.edu and follow us at Facebook, Twitter, and Instagram.