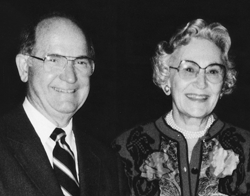 The Cody Award recognizes outstanding scientific achievement in oceanography, ocean biosciences, and earth science. It is presented by Scripps Institution of Oceanography to a scientist who has made significant contributions to his or her field of science specialty.

The Cody Award was established by an endowment from the late Robert Cody and his wife Bettie, and a substantial contribution from Capital Research & Management Company, in recognition of Mr. Cody's service to the Los Angeles-based firm. Robert Cody's affiliation with Scripps Oceanography dates back to his youth and his association with William E. Ritter, his great uncle and the founder and first director of Scripps.

When Ritter retired in the 1920s, young Robert Cody visited often and wrote, "I got to know Uncle Ritter best when, as a part of his study of the California woodpecker, I sometimes drove him on fields trips. Without a doubt, one of the most rewarding experiences of my life was the opportunity to know the Ritters, which accounts for my ongoing interest in Scripps."

The Cody Award, presented biennially by Scripps, consists of a gold medal and $10,000.