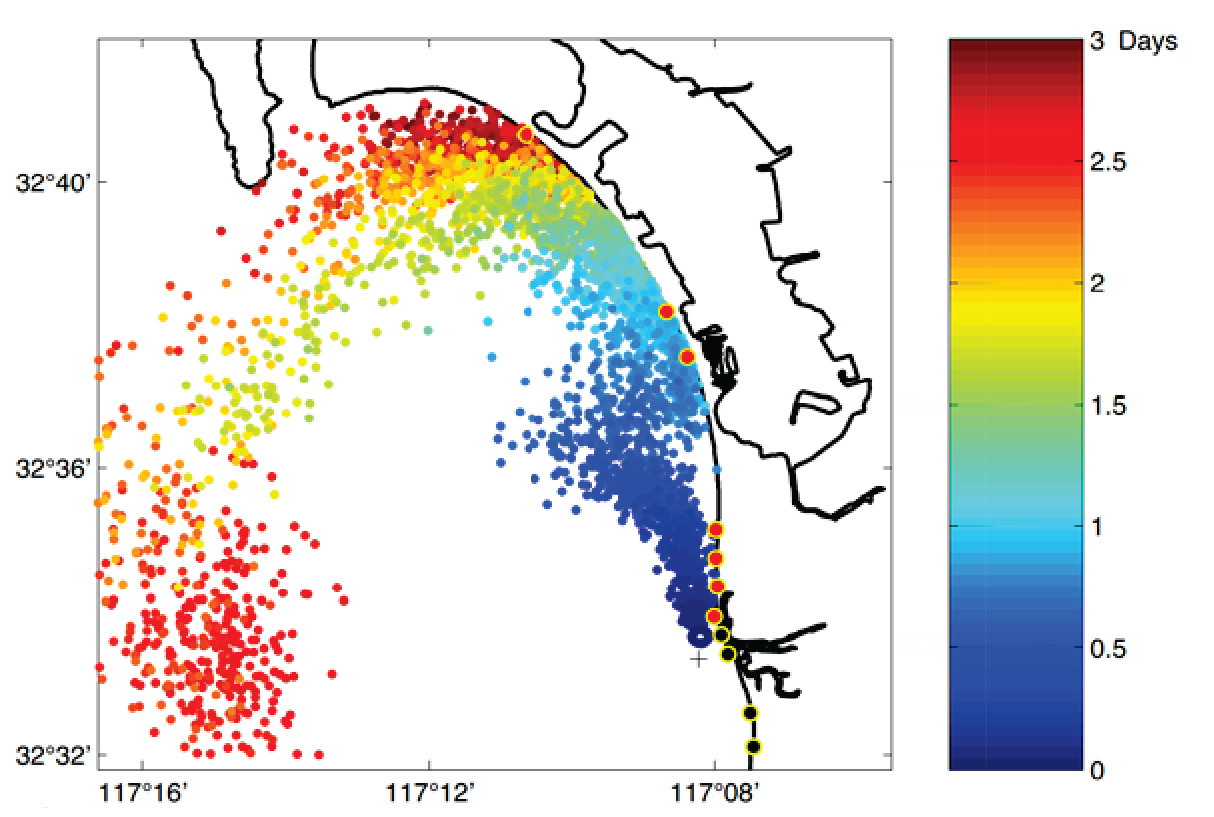 Plume Tracking: In 2007, the International Boundary Water Commission (IBWC) sponsored a supplemental monitoring program as part of a federally mandated consent decree that aimed to identify and track plumes from the South Bay Ocean Outfall, characterize land-based sources with a focus on the Tijuana River, and identify the regional oceanographic conditions that lead to high concentrations of fecal indicator bacteria on South Bay beaches. The study detailed the frequency of pollution events and potential origin sources using novel robotic technology which was able to map the plumes of pollution. The report provided a formal set of monitoring recommendations to both the IBWC, Environmental Protection Agency, and San Diego Regional Water Quality Control Board. SCCOOS now maintains an operational Tijuana River Plume Tracker for the public to visualize the direction potential plume waters are moving relative to their discharge site. The role of the surfzone in transporting pollution was identified as an information gap in predicting the plume, and is now being addressed by Scripps scientists in more recent research projects.
Scientists: Eric Terrill, Bruce Cornuelle

Cross Surfzone / Inner-shelf Dye Exchange Experiment and Current Modeling:  In 2015 scientists from Scripps Oceanography performed a series of three experiments near Imperial Beach, Calif., releasing non-toxic bright pink fluorescent dye into beach waters to track the dye’s movements along the coast during south swell conditions. The released dye was a proxy for pollution. Researchers tracked it from the air, from research boats, on the shore, and underwater  on both sides of the border. They found that the fate of the dye was strongly linked to the wave conditions. For example, during a day of strong south swell, the dye moved northward, staying close to shore for long periods of time and moving along the coastal surfzone at a speed of almost eight miles per day. This experiment also led to the development of a coupled ocean wave and circulation numerical model for the San Diego/Tijuana region from Point Loma to Rosarito, Mexico, and extending offshore to 120-foot depths. By looking at signals from freshwater and wastewater, scientists found wastewater contaminants at dilution levels of one-per-thousand to one-per-hundred  per unit of water that propagate northward and southward depending on the wave direction – levels that the public would be advised not to swim in. The model they created allows scientists to evaluate how often and at what levels various coastal regions are impacted.
Scientists: Falk Feddersen, Sarah Giddings 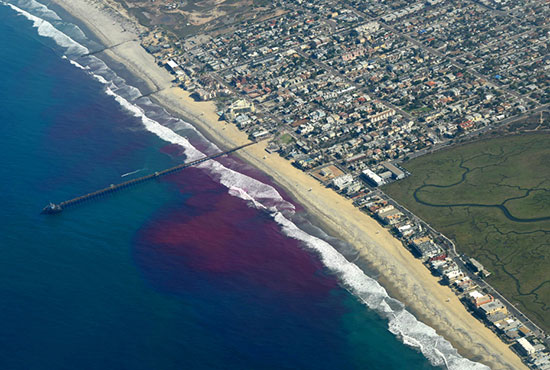 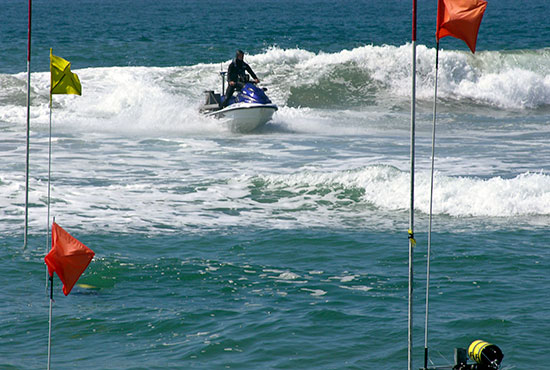 Monitoring Beach Change and Erosion Hot Spots: Scripps Oceanography has been studying wave-driven sediment transport near the Tijuana River mouth for more than a decade. Sand levels are monitored on-site using a truck-mounted scanning laser (lidar), and a sonar-equipped Jet Ski. Long-term trends in the sand level record show an erosion hotspot located in front of low-lying homes on Sea Coast Drive in Imperial Beach. The street is a site of recurring coastal flooding events. In September 2012, the beach in front of Sea Coast Drive was nourished with approximately 300,000 cubic meters of sand, enough to fill roughly 120 Olympic-sized swimming pools. Much of the nourishment sand migrated south and accumulated at the river mouth, likely contributing to the 2016 river mouth closure, which caused oxygen depletion in the water and hyper-polluted conditions in the estuary.
Scientists: Bonnie Ludka, Julia Fiedler, Mark Merrifield

Resilient Futures Flood Alert System: In 2018, researchers with the Center for Climate Change Impacts and Adaptation (CCCIA) at Scripps developed a flood alert system customized to the needs of Imperial Beach. Due to its low-lying location, the city is considered one of the most vulnerable in California to sea-level rise. A network of instruments to measure local wave and water level conditions was installed to improve predictive models of coastal flooding, especially where large waves and extreme tides may occur simultaneously, exacerbating flooding risk. The goal is to arm city stakeholders with early flood warnings for vulnerable locations, and capture baseline information needed to develop and evaluate future sea-level rise adaptation strategies. This pilot program is now being adopted throughout the U.S.
Scientists: Mark Merrifield, James Behrens, Adam Young 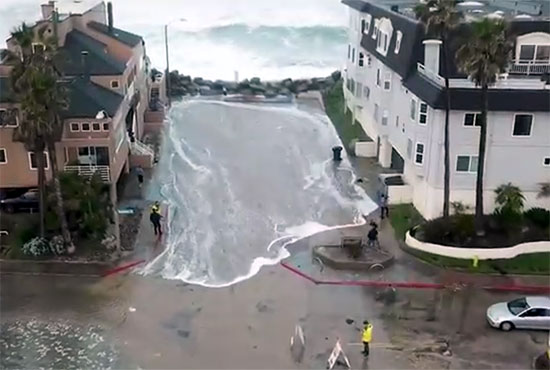 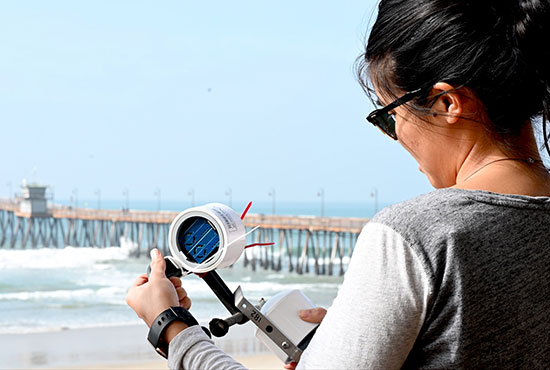 Aerosolization of Microbes from Wastewater: While it has been shown that contaminated water heavily impacts the San Diego coastal region, we know relatively little about how harmful compounds or pathogenic bacteria and viruses in wastewater become airborne once the sewage enters the surfzone, where sea spray aerosols are ejected from breaking waves. If harmful compounds and microbes are present in sufficient concentrations, vulnerable San Diegans should avoid coastal areas due to potential airborne exposure to pathogens. This project, using seed funding from UC San Diego’s Understanding and Protecting the Planet initiative, began in early 2019 and aims to characterize the air in the coastal zone of San Diego correlated with wind direction/speed and surfzone conditions; capture airborne, surf zone, and marine microbial communities; and quantify pathogen load. With it, researchers will inform decision makers of public health impacts before, during, and after storm events.
Scientist: Kimberly Prather