It was a family tradition. Every summer, Karana and Aurora Stokum would fly to San Diego to visit their grandfather, Eugene Swantz, who would treat them to an afternoon at Birch Aquarium at Scripps Institution of Oceanography. They would delight in the chance to meet the sea cucumbers at the tide pools, and watch the stately seahorses sashay through their tanks. Upon his passing, Swantz granted a gift to Scripps Oceanography to support K-12 outreach education at Birch Aquarium as a way to cultivate this same sense of wonder and inquiry among other youth.

“As a kid, I loved the tide pools because they were hands-on,” said Karana, now 16. She first visited the aquarium with her grandfather when she was two years old. “My grandpa used to take us here all the time, so there are some really fond memories. He was a big fan of the aquarium, and I inherited that.”

Swantz’s gift—a contribution of nearly $48,000 bestowed through his trust to Price Philanthropies Ocean Science Education Fund, a newly established education endowment, will help advance the educational outreach efforts of Birch Aquarium. This permanent fund generates support for ongoing programs at the aquarium into perpetuity, ensuring that many generations of students will have the opportunity to experience the excitement of discovering the marvels of marine life. 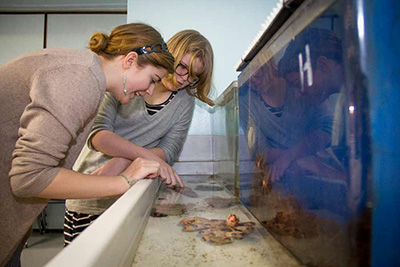 Through discovery labs and beach expeditions, young visitors to Birch Aquarium get to explore how sea creatures feel, move and behave in different habitats, from kelp beds to sandy shores and tide pools. Students in more than 400 classes in underserved schools across the county also take advantage of specially equipped educational outreach vans that allow them to interact with fish and other critters, learning about topics like biodiversity, adaptation and anatomy.

For nearly two decades, Swantz was an active supporter of Birch Aquarium. He settled in San Diego in the late 1950s and owned an accounting firm. Throughout his life, he maintained a strong connection with the ocean and enjoyed discovering the natural world around him. As a passionate advocate of science education, he made time to take his daughter, Jennie, to the beach and tide pools to instill an appreciation for the sea and its creatures. He passed along the same sense of wonder to his granddaughters when they would visit each summer from New York.

“He loved exploring more than anything, seeing what there was to find,” explained Jennie. “He was impressed with the research at Scripps Institution of Oceanography and the educational exhibits at Birch Aquarium. He wanted to help support and grow these programs.” 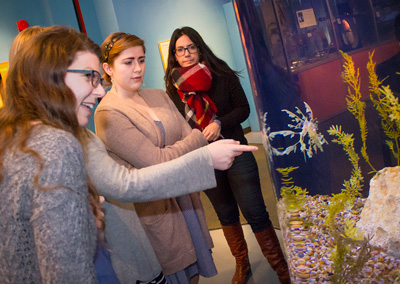 Jennie, Karana and Aurora recently traveled to Birch Aquarium at UC San Diego to present the gift from Swantz’s trust. Their visit included a guided journey through the museum exhibits, from Scripps Oceanography research on climate change and coral health to a hands-on exploration of life aboard the new R/V Sally Ride. The morning also included a special behind-the-scenes tour, with an opportunity to touch a baby leopard shark in the education classroom; feel a jellyfish and learn how they are bred; and greet an octopus who was eager to reach out—with all eight arms—to his newfound friends.

The experience was memorable for both Karana and Aurora, both of whom are interested in studying and working with animals. Karana shared that biology is her favorite class, and her goal is to pursue a career in captive wildlife care and rehabilitation, particularly for elephants or big cats. And on her recent 12th birthday, Aurora snorkeled with leopard sharks at the beach in La Jolla—a signature program run by Birch Aquarium—and has her heart set on being a marine biologist.

Having the opportunity to interact with ocean life brings science alive to students. Generous gifts like the one from Swantz enables Birch Aquarium to motivate a new generation to understand and appreciate the vibrant marine life that exists along our coastline and around the world. To learn more about supporting educational programs at Birch Aquarium, go here.