The U.K. Antarctic Place-Names Committee has honored Helen Amanda Fricker with an Antarctic ice piedmont, an ice-covered coastal strip of low-lying land backed by mountains, in her name. Fricker is a renowned glaciologist and geophysics professor in the Cecil H. and Ida M. Green Institute of Geophysics and Planetary Physics (IGPP) at Scripps Institution of Oceanography at the University of California San Diego.

The committee honors British subjects who have made an exceptional contribution to furthering the understanding, protection, and management of Antarctica. The Fricker Ice Piedmont is located on the eastern side of Adelaide Island along Barlas Channel in the British Antarctic Territory. Fricker was one of 28 polar scientists honored this year as part of a larger celebration marking the 200th anniversary of Antarctica's discovery. 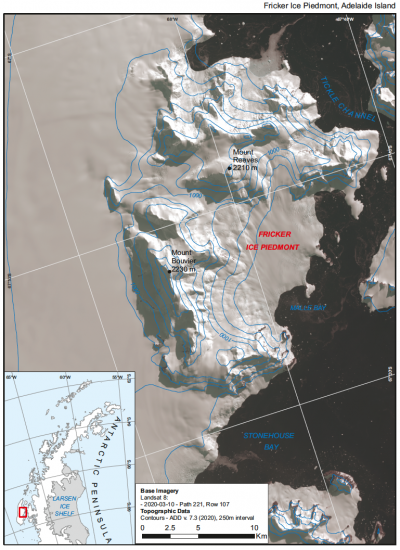 Fricker is widely recognized for her discovery of active subglacial lakes in Antarctica. She has shown that these lakes form dynamic hydrologic systems, where one lake can drain into another in a short period.

Throughout her career, Fricker has also used satellites, including NASA's ICESat-2, to study the evolution of ice sheets in Antarctica and Greenland, contributions that have given researchers a better understanding of some of the world's most remote regions.

Fricker's journey began in the U.K., where she received her B.Sc., with first-class honors, in mathematics and physics from University College London, later earning her Ph.D. in glaciology from the University of Tasmania before joining Scripps as a postgraduate researcher. Having spent so much time outside of the U.K., she said, “It was really nice of them to acknowledge me on the list since I'm sometimes not considered very British.”

Other features were named for Fricker’s friends and colleagues Seymour Laxon and Katharine Giles who had both died in non-research-related accidents in the midst of their careers.

"I heard from a friend in the U.K. This friend said, ‘Do not tell anyone yet, but Seymour and Kathrine are being honored with a piece of land in Antarctica,’" Fricker recalled. "It changed everything. It then became a lot more meaningful, knowing my friends would be honored.”

When the news went public, Fricker was surprised by the number of people –including friends, distant family, and strangers – who reached out to offer congratulations.

"I had never had so many texts and emails from random people who were blown away,” said Fricker. “I think what makes this so significant is that it's a piece of Earth that isn't going away.”

Fricker had given a public lecture at the beginning of 2019 at the Birch Aquarium at Scripps. The talk detailed her discovery of subglacial lakes in Antarctica and about women in science. When she discussed the naming of these lakes, she stated that they were named after the ice streams that flowed above them, all male names.

Fricker recalled that later that evening, her daughter, who was 13 at the time, said, “If you're all about lifting up women, why didn't you name the lake after yourself?” Fricker responded, “I didn't really think it would have, I didn't want to be so arrogant to name a place after myself."

Ironically enough, a year later Fricker would find herself breaking the cliché of predominantly  male place names in Antarctica.

Fricker offered a positive message to women who are up and coming in her field, stating, "This is now no longer a white male explorer's world. Someone just like you has got a piece of land named after them.”

The naming of places in Antarctica dates back to 1775 when Captain James Cook named the South Georgia Islands in honor of King George III of the United Kingdom. You can see the location of the Fricker Ice Piedmont and the other honorees here.

Physics connects seismic data to properties of rocks and sediments