Around the Pier: Keeping Compost Close

A group of students, staff and faculty has been pushing boundaries with composting since creating a collection program on the campus of Scripps Institution of Oceanography at the University of California San Diego in May 2017.

While UC San Diego dining halls and on-campus eateries are restricted to composting only pre-consumer waste such as cooking scraps and cuttings generated before food is served, the group, SIO for Sustainability, has included both pre- and post-consumer compost in its program from the start.

And as of this spring, instead of sending compost to a location several miles from campus along with the majority of UC San Diego food waste, compost generated at Scripps will go to the on-campus, student-centric and sustainability-focused Roger’s Community Garden at UC San Diego. 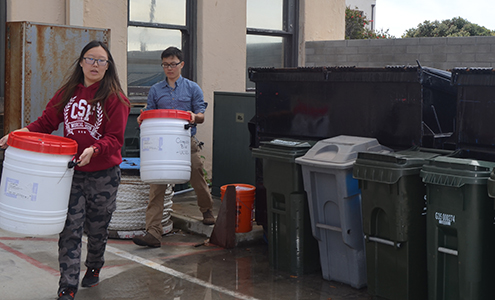 Nestled in kitchenettes and behind tables at Scripps’ Pinpoint Café, there are currently 24 compost collection bins scattered across the Scripps campus. SIO for Sustainability is currently led by Scripps Safety Coordinator Allyson Long and biological oceanography PhD student Laura Lilly. The program started at Scripps in 2017 after an on-campus worm composting workshop piqued interest in a greater composting system at Scripps. UC San Diego Housing Dining Hospitality (HDH) at the time only allowed pre-consumer waste to be composted because of the amount of inappropriate garbage that was typically found in post-consumer waste. Long and her team, however, found that such contamination was close to zero at Scripps, allowing the Scripps program to divert both pre- and post-consumer waste.

At first, Scripps’s compost was being added to the HDH compost load headed to a site called Miramar Greenery for processing. Noting the carbon footprint generated by transporting this waste eight miles away, SIO for Sustainability looked into more local compost facilities. This search led Long to reach out to Roger’s Community Garden at UC San Diego.

Roger’s Community Garden (soon to be renamed Roger’s Urban Farmlab) is an outdoor garden space for sustainability-oriented student projects. Located at the southern end of UC San Diego’s campus, the garden features plots available for rent by UC San Diego community members, as well as infrastructure for multiple composting methods. A focal point of the garden is the anaerobic digester, a student project consisting of a system of tanks and piping that converts food scraps to high-nutrient fertilizer and gas that can be used to generate electricity.

Long said that the initial response from the Roger’s Community Garden staff was enthusiastic.

“Roger’s Community Garden really upped the ante by saying their anaerobic digester could accommodate more and keep more compostables on campus,” she said. “Since we had been doing post-consumer for two years already, they knew that we were pretty diligent about contamination and really wanting to make this part of our daily life here.”

As of Feb. 1, the compost collected through the SIO Sustainability group program goes entirely to Roger’s Community Garden. Thanks to student-volunteers, the Scripps compost is collected at the end of each week and unloaded at the garden.

Scripps has been sending not only pre- and post-consumer compost to Roger’s Community Garden, but also kelp waste from the pier seawater filtering system, along with animal husbandry waste (parts of fish that can’t be fed to marine life at Birch Aquarium at Scripps).

“There are unique and important micronutrients and plant hormones you can only get from fish emulsion and kelp. Scripps has certainly helped us to diversify the 'nutrient portfolio' of our soil,” said Zack Osborn, the student and community education specialist at the Bioregional Center for Sustainable Science, Planning and Design at UC San Diego. Osborn oversees and supports student projects and research at Roger’s Community Garden, and received the 2019 UC San Diego Staff Sustainability Award for his work.

In the 2019 winter quarter alone, Roger’s Community Garden composted an estimated 11,470 pounds of food waste, of which 4,030 pounds were sent to the anaerobic digester. This resulted in the prevention of 2,478.56 metric tons of CO2 being emitted into the atmosphere. The processed compost is used to fertilize garden plots and for student projects, including the newly-unveiled vertical “grow towers,” which will provide leafy greens to the Triton Food Pantry to support food-insecure students.

In addition to facilitating the Scripps composting program, SIO for Sustainability has increased the number of zero-waste events as Scripps. Thanks to the partnership with Roger’s Community Garden, Long pointed out that “now we’re able to have zero-waste events at the Scripps Seaside Forum because we can put cups, utensils, and plates in the anaerobic digester.”

SIO for Sustainability has also been acquiring reusable dishware to make smaller events and gatherings at Scripps zero-waste. A new set of light dishware and an on-campus dishwasher can both be reserved online through the SIO for Sustainability site, both of which will help reduce the amount of trash, regardless of whether it is compostable. The group is also organizing the 2019 Scripps Earth Week, which kicks off on April 23 with a beach cleanup.

“The fact that Scripps was able to go zero to sixty on composting back in May 2017 with very little training and education is startling,” said Osborn. “It goes to show that it really just comes down to the people. Scripps has the waste stream that we don’t have to look at twice.”

For Camila Taylor, a staff member at Pinpoint, composting is incorporated into her and her coworkers’ daily routines.

“At the end of the day we gather the food scraps, teabags, and filters from the espresso machines,” she said. “In terms of extra work for us, it takes a few more minutes than it would just throwing these things right in the trash, but it’s totally worth it. We like doing it.”

– Julia Dohner is a PhD student in the laboratory of geochemist Ralph Keeling. She splits her time between working in the lab, where she is developing a method to quickly measure carbon isotopes in seawater, and at her computer, where she models the global carbon cycle to understand the natural variability in atmospheric CO2 levels.