Around the Pier: Profiles in Diversity - Argentinian Scientist Pursues Dream Project in Panama

There’s an old saying that goes, “Everybody needs a bit of luck but you have to be prepared when luck strikes.”

Argentina native Martín Tresguerres has thought of this phrase often over the course of his career as a marine biologist, a journey that has led him across countries, through a number of research labs, and in 2011 brought him to Scripps Institution of Oceanography at UC San Diego where he is now an assistant professor in the Marine Biology Research Division.

Tresguerres credits his strong work ethic and proactive approach to finding research opportunities as necessary tools for success. In short, he is well prepared for that strike of good luck.

In his world-class research lab at Scripps, Tresguerres studies cell biology and the physiology of aquatic organisms, including fish, sharks, and corals. By understanding how cells within organisms work under “normal” conditions, Tresguerres and other researchers can then study or predict how cells might respond to sources of environmental stress such as climate change, pollution, and ocean acidification.

“One of my philosophies is that you cannot predict how something is going to be affected by stress if you don’t know how that organism works in the first place,” said Tresguerres. “For example, if you have a disease in your liver, in your brain, or in your lungs, it’s impossible to treat that disease if we don’t know how the cells work when they’re healthy. We’re trying to understand the function of healthy cells in different animals and with that information we can predict and understand what goes wrong under certain stresses.”

A recent collaboration with fellow Scripps researchers Davey Kline and Andreas Andersson brought Tresguerres to Bocas del Toro, Panama, where he worked on a “dream project” studying coral reefs in the field. (Video here.) Tresguerres and Kline received a grant from the National Science Foundation to work on a project that combined Tresguerres’ expertise in coral cell biology with Kline’s knowledge of coral ecology as the scientists attempt to determine the impacts of climate change on coral reefs. Andersson also collaborated with the team, bringing his expertise in marine biogeochemistry.

“One of the great things about Scripps is that there are many researchers interested in different areas and I was lucky enough to meet Davey and Andreas,” said Tresguerres, a co-principal investigator of the project. “The beauty of this research is that collectively we are looking at how corals respond to environmental conditions on a variety of levels, from the molecular or cellular to the ecological to the biogeochemical. It was a great way of putting together our expertise.”

Kline, a project scientist at Scripps and co-principal investigator of the project, also noted the benefit of jointly working with colleagues from other fields.

“We hope that by combining such diverse perspectives that we can gain an understanding of the mechanisms underlying corals' responses to global change,” said Kline. “Besides all of the scientific advantages of this collaboration, we are all good friends so it has been a blast working together on this exciting project.” 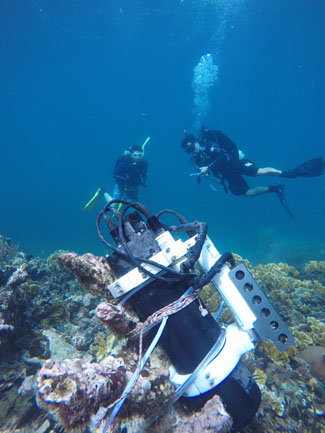 In Panama, Tresguerres, Kline, and Andersson went scuba diving to collect coral and water samples from different depths, and then another diver would meet them in the water to retrieve the samples and bring them to the boat where Scripps graduate student Lauren Linsmayer would freeze or preserve the samples for analysis back in the lab at Scripps

Tresguerres and Kline also conducted transplant experiments, in which they collected corals from one area or condition and moved them into another area with different conditions, such as the amount of light, nutrients, and water flow. They will return to these locations every year for the next few years to see if and how the transplanted corals have adapted to these different conditions.

Tresguerres has wanted to study coral physiology in the field for quite some time, and to finally have a project come to fruition in Panama has been “very rewarding.”

“I started thinking about working with corals in the year 2000, when I went to Bermuda for a coral reef ecology class,” he said. “Now 16 years later to have a project in which I’ve combined cell biology with scuba diving and ecology in the field—that’s pretty amazing.”

Originally from Río Gallegos, a port town near the southern tip of South America, Tresguerres was a very curious child. His parents and grandparents encouraged his thirst for knowledge by providing him with books on various subjects including biology, astronomy, geology, history, and literature. He was captivated by wildlife documentaries on television, including those by Jacques Cousteau, and he credits these films, as well as his early exposure to science books, with sparking his interest in oceanography.

Although he was interested in studying biology, Tresguerres enrolled as an engineering major at the University of Buenos Aires because he thought it was more practical. During his first-year admissions courses, he was exposed to cell biology for the first time, and he noticed that something “just clicked.” “I realized that I liked science from the point of view of knowing how organisms work,” explained Tresguerres.

Realizing the possibility of a career in science, he switched his major to biology and never looked back. During the six-and-a-half-year combined bachelor’s and master’s program, Tresguerres immersed himself in his studies, volunteering in several labs and taking courses in ecology and cell biology. He ultimately focused his research on comparative physiology, studying the physiological mechanisms by which animals do what they do—for example, how a crab can move from seawater to freshwater.

“I really like the way that physiology works and is studied because you can ask very specific questions,” said Tresguerres. “I also like the experimental design in which you can plan experiments to answer the questions that you’re interested in.”

Upon graduation, Tresguerres left Argentina to pursue a PhD at the University of Alberta in Edmonton, Canada. There, his research focused on the physiology and cell biology of sharks, trout, and hagfish. He noted that this opportunity was only possible due to his perseverance, as he applied to more than 40 labs before finding one that accepted him.

“You can basically apply this concept to everything,” he said of the application process. “Nothing is ever going to be easy. You make your own destiny and you make your own career path.”

He later completed his postdoctoral training in molecular chemosensors and signal transduction at the Weill Cornell Medical College in New York City. Working in a medical lab allowed Tresguerres to learn many techniques that are normally used in medical sciences—techniques he now employs at Scripps in combination with his knowledge of animal physiology.

Outside of the lab, Tresguerres is involved in several outreach activities at Birch Aquarium at Scripps. He helped the aquarium develop activities for high school students that focus on his work with sharks and he’s given a number of public lectures. He also collaborated with the aquarium to develop a new exhibit on ocean acidification and coral reefs. The recently launched exhibit prominently features Tresguerres’ research on coral cell biology.  (Video here.)

“Birch Aquarium is an outstanding resource that we have here at Scripps. This new exhibit has been a very exciting and very rewarding experience for me because it allows me to show cell biology to the public,” said Tresguerres. “What I wanted to do is to get people to realize that coral reefs, while they can be beautiful, they are comprised of cells, and different cells do different things, and understanding how those cells work can help us predict or understand ocean acidification or other sources of stress will affect them.”

Tresguerres said that his favorite part of being at Scripps is leading cutting-edge research, discussing ideas with his graduate students and postdoctoral researchers, and trying to discover new things.

“Something very exciting about science is that sometimes organisms that are not that popular or that attractive to the general public might give us very important insights into how organisms work,” he said.

For example, Tresguerres has found that sharks have a good model system for studying how animals sense and regulate the amount of acidity in their blood. His lab is currently studying and trying to understand how microscopic algae called diatoms incorporate carbon dioxide for photosynthesis. And he collaborated with Scripps marine biologist Greg Rouse on a research project to understand how bone-eating worms can dissolve carcasses of whales for obtaining food.

Strange as it may seem, these bizarre marine creatures are helping Tresguerres and other scientists gain a better understanding of how many different organisms—including humans—work.

“By studying all these diverse marine organisms, it’s very exciting to see how the mechanism at the cellular level can be very similar from a shark to a human or a bone-eating worm to a human, and that speaks to the beauty of evolution.”