Researchers at the Scripps Institution of Oceanography, UC San Diego, have been visiting Earth’s poles for more than 60 years, but only now are those Arctic and Antarctic researchers being assembled in one collective.

The new Scripps Polar Center brings together scientists from disciplines that investigate everything from ocean physics to ice sheet and glacier dynamics to the ecology of the organisms that live at the poles. Polar Center leaders say that a cross-disciplinary approach is what’s needed to understand polar regions in all their complexity at a time when climate change is destabilizing the Arctic and Antarctic regions faster than anywhere else on Earth.

“The questions that are at the frontier of our knowledge are really all at intersections between disciplines,” said center member Jennifer Mackinnon, a physical oceanographer whose own recent work has followed the pulses of ever-warming water that penetrate the Arctic Ocean and speed up the melt of sea ice. “For us, there is a ton of value in having a whole that is more than the sum of its parts." 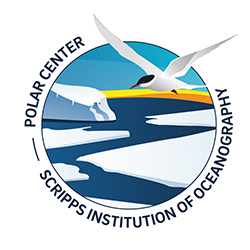 The idea of a polar center had been on Helen Amanda Fricker’s mind for more than a decade. Fricker is a glaciologist at Scripps who has spent several decades documenting changes in Antarctic ice sheets using ESA and NASA satellite data. She had lobbied for funds to create such a center for several years before succeeding. With a $30,000 grant, the center formally launched Jan. 24,  2019 with a half-day Town Hall meeting that drew 57 researchers and students from across Scripps.

“Polar Science is a cross-cutting theme through the three research sections of Scripps (Earth, Oceans and Atmosphere, and Biology), and there are a large number of principal investigators involved; we needed a way to bring us together in a more formal setting,” said Fricker.

The Polar Center’s existence acknowledges the urgency the research community and governments feel because of how quickly the poles are changing. The fastest changes in the climate record are taking place now in Earth’s polar regions. In the Arctic, sea ice cover is shrinking which affects the planet’s albedo, its capability to reflect sunlight back to space. The Greenland Ice Sheet and the Antarctic Ice Sheet are both losing ice to the ocean, causing sea levels to rise.

In 2016, the National Science Foundation (NSF) launched an initiative, “Navigating the New Arctic,” as one of its top funding priorities, anticipating that rapid warming in the Arctic will “portend new opportunities and unprecedented risks to natural systems” as well as the human systems that depend on them. The following year, NSF’s Office of Polar Programs joined with a British counterpart to investigate the Thwaites Glacier in Antarctica – a region of special focus. The move was a response to the alarm sounded by the National Academy of Sciences after researchers found that the rate of ice loss in the West Antarctic Ice Sheet, where the glacier is located, doubled in a six-year period. The region accounts for 10 percent of global sea-level rise. In 2018, NASA launched ICESat-2 (Ice, Cloud and land Elevation Satellite-2) to monitor changes in the Earth’s land ice and sea ice.

The changes that happen at the poles affect the entire planet and scientists are racing to understand when to expect destructive consequences of changing albedo due to sea ice loss, and sea-level rise due to land-ice loss. From 1995-2005, polar regions were 2 °C (3.6 °F) warmer than their 1951–1990 average. In the Arctic, the warmth diminishes the extent of sea ice, creating a snowball effect known as a positive feedback. The absence of ice exposes the darker ocean surface and diminishes the region’s albedo, causing the rate of warming to accelerate. The added heat energy being carried by the ocean translates to higher sea levels and disruptions of global ocean circulation. The tweaking of circulation patterns in turn can cause drastic swings in weather on every continent. Sea-level rise from the melting Greenland and Antarctic ice sheets will affect all coastal communities, and it is crucial to know how much ice will be lost, and how quickly, researchers say.

These rapid physical changes have created a new arena for international politics, especially in the Arctic as countries probe once-inaccessible ocean regions for oil, seafood, and other resources. The new look of polar regions has set off a research arms race with several countries investing in icebreakers that can encroach ever-deeper into frozen reaches.

U.S. researchers have repeatedly requested a heavy icebreaker that can match the capabilities of European, Canadian, and Russian vessels without success. Scripps oceanographer Jim Swift, who currently serves on an advisory panel assessing U.S. science needs at the poles, said the Scripps Polar Center could become an important advocate on such issues, especially in identifying what kinds of science researchers anticipate will be done there in the future.

“It’ll help provide a voice for the needs of future science in the polar regions,” said Swift.

One funding request made in March to NSF under the Navigating the New Arctic initiative is a likely template for future Polar Center proposals. It came from 11 Scripps researchers representing seven fields. The scientists propose to create a way to predict changes in sea ice and make it available to native Alaskan communities that depend on the sea ice for hunting and protection from storms. The endeavor will require expertise in physical oceanography, marine biology, geology, and economics.

The Center is also coordinating a curriculum in polar science and hopes to eventually offer a certificate in polar studies to graduate students, said Fiamma Straneo, an oceanographer and co-leader of the Center with Fricker. Straneo taught the first Center course “Ice Sheet-Ocean Interaction” in spring 2018. Another course, “Polar Systems,” co-taught by Straneo and Scripps geoscientist Jeff Severinghaus began in fall 2018.

“By pooling our existing in-house expertise in polar science, the hope is that Scripps will become a leading institution for carrying out fieldwork in the Arctic and Antarctic and for training the next generation of polar scientists,” said Fricker.