A sunny San Diego day set the stage for a ribbon-cutting ceremony on April 15 at the Nimitz Marine Facility (MarFac) in Point Loma to celebrate the completion of a five-year, $20.9 million rehabilitation project.

MarFac is the home port and technical support center for Scripps Institution of Oceanography at UC San Diego’s world-class oceanographic research fleet. Since 2014, MarFac has been under construction as crews replaced a 48-year-old wharf, built a new pier, upgraded technology and utilities, and improved environmental protection systems.

“At UC San Diego, we are committed to conducting research that pushes the frontiers of our knowledge so we can make our world a better place,” said Chancellor Khosla during his welcoming speech. “The revitalized pier and wharf enable us to advance and achieve our commitments and goals, and that is why today is truly a day of celebration.”

During her speech, Leinen noted that the improvements made to MarFac will enable Scripps to conduct research related to national security, to perform effective and safe naval operations that are important to our economic livelihood, to look at resources such as fish or minerals, to protect the public by coming up with solutions to the greatest problems facing the planet today—from climate change and earthquakes to tsunamis and other hazards—and finally, to experience “just sheer exploration and the awe of understanding this incredible water planet.”

“All of that is embodied in what goes from this pier. It’s the place from which we go to understand and protect this ocean planet,” said Leinen, who is also vice chancellor for marine sciences at UC San Diego. “The ships that we operate from here operate not only on behalf of Scripps, but of the country.”

Senator Block presented a resolution to Chancellor Khosla on behalf of the California State Senate that highlights the importance of the research conducted at Scripps Oceanography and UC San Diego.

“We all know in Sacramento that the UC is so critical to everything we do in the State,” said Block. “We couldn’t do it in California without the University of California, without UC San Diego, and without Scripps Institution of Oceanography.”

In a closing speech, Appelgate noted that the MarFac revitalization project was only possible due to a collaborative effort across many entities, including the U.S. Navy, the Office of Naval Research, UC San Diego Construction Management, and Marathon Construction—the company that actually built the new facility and notably constructed the original MarFac facility nearly 50 years ago (under the name Furby Engineering). Appelgate expressed his gratitude to all parties involved for a job well done and said he expects that the new structure will stand for the next 100 years.

“To all of you, I say that you are all now ocean explorers. This is a mission in which we are all conjoined, and ocean exploration does not begin on the deck plate of a ship. It happens right here at facilities like this, where the hopes, the dreams, and the expensive equipment that oceanographers use—all that gets mobilized aboard research vessels sent out to sea,” said Appelgate, head of Scripps Ship Operations and Marine Technical Support. “Through the hard, dedicated, and capable work of people like all of us, that kind of work can go on, so thank you.”

MarFac is currently home port to two oceanic research vessels operated by Scripps, Roger Revelle and Robert Gordon Sproul, as well as the research platform FLIP. Later this year, MarFac will welcome a newcomer to the pier, R/V Sally Ride, a state-of-the-art research vessel that will support the evolving needs of scientists for decades to come. 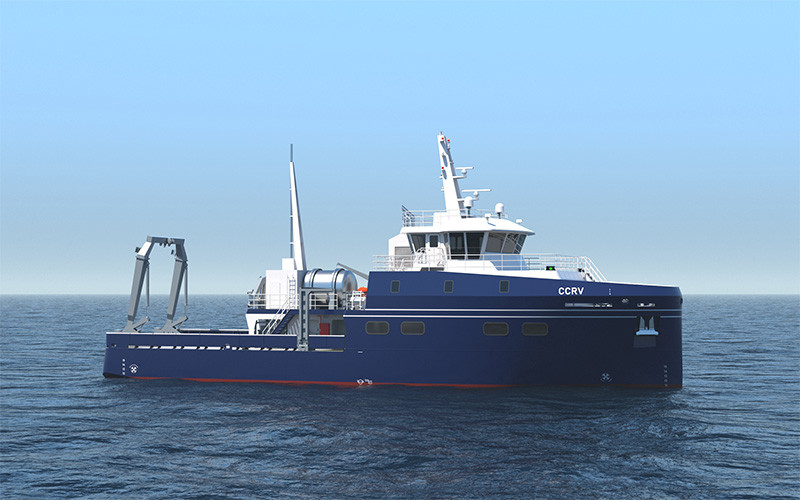