A new succulent garden on the campus of the Scripps Institution of Oceanography at UC San Diego is bringing science out of the labs and into a garden to create an engaging and relaxing space on the Scripps campus for people to learn about coral reef ecology.

The goal of the coral reef-inspired succulent garden is to feature the research conducted at Scripps and to educate members of the public as they pass through campus along the Scripps Coastal Meander Trail, a small piece of the network of trails that make up the 1,200-mile California Coastal Trail. 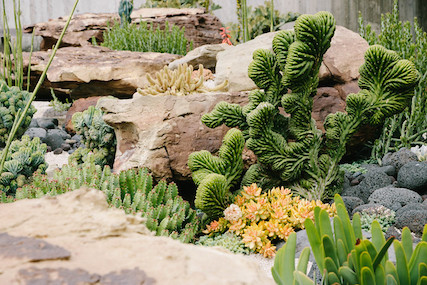 Brant Chlebowski and Nina Rosen, now alumni of Scripps Oceanography, spearheaded this science communication effort. The two met in 2016 while completing their Master of Advanced Studies degrees in Marine Biodiversity and Conservation (MAS MBC) at Scripps. One day while sitting in their usual lunch spot near the Eckart building on the Scripps campus, a pile of shrubs and bark sparked their vision of what would become the coral reef-inspired garden.

“Scripps is for everyone,” said Rosen. “Even though coral reef ecosystems are far away from San Diego, we can still connect to this environment by showcasing relevant research and discovering biological and ecological parallels in nature.”

From their efforts, along with Scripps marine scientists and local landscape architects and botanists, they have created a space to communicate science to the public using succulents and research-grade technology. After detailed planning, the garden took root in June 2018. Nearly a year later, the garden’s succulents are thriving in their home—which is just 530 feet from the ocean.

Forging the connection between science communication and a succulent garden posed a challenge for Chlebowski and Rosen: how can they emulate coral reefs in an educationally and aesthetically pleasing way using succulents, while still maintaining a healthy environment on land? They knew the solution was to find beautiful and diverse drought-tolerant native succulents that evoke the structure and complexity of an undersea world.

Enter Cammie Ingram, the director of capital planning and space management at Scripps. The trio’s knowledge complemented each other for this project—Chlebowski and Rosen had their Scripps degrees; Ingram had her botanical and capital planning expertise. Combine their knowledge and experience with coral reef ecologists at Scripps like Stuart Sandin and Jennifer Smith with the landscaping support from campus facilities and you get an interdisciplinary “Scripps family,” as Rosen describes it. 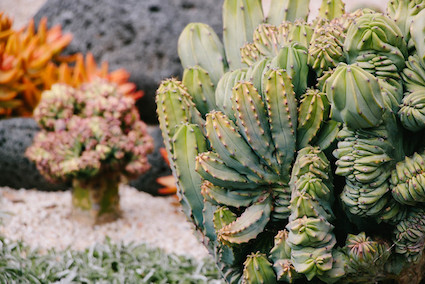 The garden has small succulents and cacti spread out along the hillside, mimicking the landscape of the shallow reef crest—the shallowest habitat of a coral reef, characterized by diminutive coral formations as a result of being located in the breaking wave zone.

The fore reef, laid out in the main portion of the garden, resembles the postcard image of coral reefs. The complex and robust shapes of colorful succulents like the blue crested myrtillocactus geometrizans cristata, or Dinosaur Back Plant, are interrupted by distinct narrow sand channels, or “spur-and-groove” formations. The large rocks in the fore reef of the garden, which were tracked down by Ingram, are a near perfect resemblance of their counterparts in coral reefs.

The lagoon, true to its coral reef inspiration, is separated from the habitats on the other side of the entrance to the Eckart building. Taking on delicate growth forms, the lagoon makes up the final zone of this intricate garden.

Furthering the connection between the public and scientific research conducted at Scripps, educational signs and 3-D models will soon display the annual growth of the garden with the same techniques used by the Smith and Sandin labs to study coral reefs. Images of the garden will be posted on signs and will use the same photomosaic technology as the 100 Island Challenge—a collaborative project based at Scripps to describe the variation of coral reefs across the globe.

Clinton Edwards, a PhD student in the Sandin Lab and 100 Island Challenge researcher, was instrumental in the creative application of the 3-D imaging and mapping technology to the coral garden project. He helped ensure that the succulent garden was ecologically accurate in structure and orientation to a real coral reef. He also used the innovative photomosaic technology—often employed underwater—above ground to create the first 3-D map of the coral garden.

Other members of the Sandin and Smith labs at Scripps were also essential in advising the ecological accuracy of the garden by matching succulent species to their coral lookalikes, which will be displayed on signs at the garden. 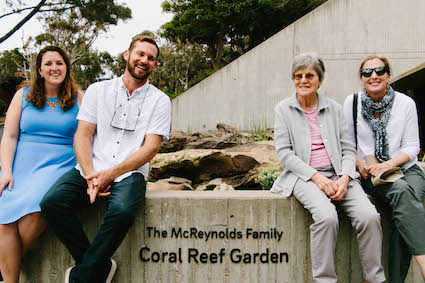 Inspired by the vision of Chlebowski and Rosen and the progression of the garden, Christa McReynolds, a neighbor and supporter of Scripps, stepped in to help build on that progress by establishing an endowed student prize that will support graduate students in the field of coral reef ecology. On April 26, 2019, the Scripps community gathered at the garden for a celebration of the official dedication to the “McReynolds Family Coral Reef Garden.” The increased support for the coral reef-inspired garden will help this science communication effort reach students and the greater La Jolla community.

“I live near the Scripps campus and have been walking up the Coastal Meander Trail for years,” said McReynolds, “so when I saw the coral reef garden take shape, I wanted to be sure that it had the funding to be cared for in perpetuity.” McReynolds hopes that the additional funding will spur students to find ways to address the threats coral reefs face from climate change. 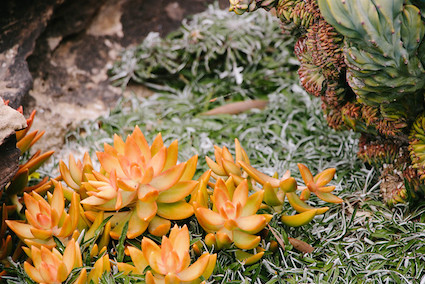 “There’s so much amazing science happening at Scripps that stays in the labs,” said Rosen. “We truly hope to get some of this science out there and educate anyone who walks by to whatever degree they want to learn.”

Chlebowski and Rosen said they are thankful for the collaborators who helped create the educational garden. “This project would not have been as successful without the talents and expertise of our team members,” they said.