Around the Pier: Squidtoons - Sparking Scientific Curiosity through Comics

As a young boy growing up in Hong Kong, Tsz Fung Kwan looked forward to reading the famous Jim Davis comic strip Garfield in the Sunday paper. Something about the iconic orange, lasagna-loving cat struck a chord with Kwan, and, at the age of seven, when his family immigrated to the United States in search of a better life, he paid homage to his comic hero by choosing “Garfield” as his new American name.

Now 24 and a first-year graduate student in the marine biology program at Scripps Institution of Oceanography, Kwan has been able to merge his love for comics and ocean science by creating Squidtoons—a website bustling with quirky, educational, kid-friendly comics for the sole purpose of “illustrating science with farts, burps, and giggles.”

“We really just want to educate the public about science in a more visually appealing way, support scientists with illustrations, and provide teaching aids to educators,” said Kwan. “Teachers have it rough enough, so giving them an extra hand in explaining marine science concepts might lead to them talking more about marine science in the classroom.”

A curiosity for science led Kwan to pursue undergraduate studies in environmental science at UC San Diego, and he took a job as a student worker in the lab of Scripps marine ecologist Stuart Sandin to help cover college tuition fees. While working in the Sandin lab, Kwan became enamored with marine science and all the strange, beautiful creatures of the sea. When he found out Scripps was launching a new marine biology undergraduate program, he jumped at the opportunity to switch majors, and in 2013, was among the first group of students to graduate with a bachelor’s degree from the program.

“It’s a blessing to be learning again,” said Kwan, now a graduate student researching fish neurobiology and potential responses to environmental stress in the lab of marine biologist Martín Tresguerres.

"Garfield is full of energy, very proactive, and genuinely interested in science, outreach, and communication,” said Tresguerres, also noting that Kwan personally designed the website and logo for the Tresguerres lab. “Based on his experience and dedication, he has the potential to carry on an exceptional PhD thesis.”

In addition to a National Science Foundation Graduate Research Fellowship, Garfield was recently awarded a San Diego Fellowship, a UC San Diego-funded program that supports students who have overcome hardships and demonstrated a commitment to diversity or helping underserved students gain access to education.

The idea to develop a marine science-focused comics website struck Kwan while he was browsing the Internet and came across other cartoon sites, such as the Oatmeal—a site that has grown virally to amass nearly seven million unique visitors each month and covers a variety of topics, ranging from the silly to the obscure.

While Kwan considers the Oatmeal to be a “huge inspiration” to his work, he noticed a lack of educational cartoons across the Internet featuring the exciting world of marine science.

“I feel like the Internet really embraces science that’s cool and tangible, something people can understand easily, and it gave me the idea to start some type of online comic strip,” said Kwan. “If we can show it visually, what’s stopping people from understanding marine science?”

Given Kwan’s direct access to Scripps science and researchers, as well as his personal research projects as a marine biology student, he certainly had enough content to get started on the niche comic site.

“I can’t draw that well, so I’m not ever going to be like the Oatmeal—a one man show,” said Kwan. “But I had the vision of what Squidtoons could be, so I gathered up a couple of my artist friends and I started doing the research side and they started doing the art side, and then we combined forces.”

Kwan serves as the creative director and mastermind behind Squidtoons, which launched a little over a year ago, but the site is truly a collaborative effort. The ever-growing Squidtoons team now includes Scripps graduate students Beverly French, Kaitlyn Lowder, Bethany Kolody, Jennifer Le, Kate Durkin, Rishi Sugla, and Daniel Conley; UC San Diego undergraduate students Dana Song, Hyeri Jung, and Yuzo Yanagitsuru; and a handful of other contributors, all working on a volunteer basis to promote the site’s mission of translating scientific research into infographics and comics.

Although some of the Squidtoons artists and illustrators do not have scientific backgrounds, Kwan appreciates the unique point of view they bring to each drawing.

“The artists have total creative freedom, and they’re really imaginative,” he said. “I’m always surprised to see what they come up with!”

In addition to creating content from scratch, the Squidtoons team frequently collaborates with Scripps scientists on comics. In fact, the name Squidtoons was inspired by one of Kwan’s first lab experiences as an undergraduate student, when he researched squid with then-Scripps graduate student Mike Navarro. Later, they collaborated on a Squidtoons infographic titled The Super-Market Squid, which details the ecological and commercial importance of market squid.

The Squidtoons team recently worked with Scripps graduate student Lalitha Asirvadam to create a poster detailing the importance of mangroves and their central role in the health of coral reefs.

Chief Scientific Illustrator Dana Song designed the colorful mangrove poster, while Kwan and the rest of the team streamlined content and translated the poster into Dutch and Papiamento, two popular languages spoken on the Dutch Caribbean island of Curaçao, where Asirvadam's research took place.

The poster is now being used as an educational tool to promote mangrove conservation, and Asirvadam distributed copies of the finished product to local fishing shops and surf shops across Curaçao—an island that is heavily dependent on its coral reefs for tourism and industry.

Over the summer, the Squidtoons gang worked overtime to produce “The Fallacy of Sharks” in time for the wildly popular Shark Week on the Discovery Channel. This comic strip dispels common myths about “bloodthirsty” sharks and educates readers on the vital role sharks play in keeping our oceans healthy. 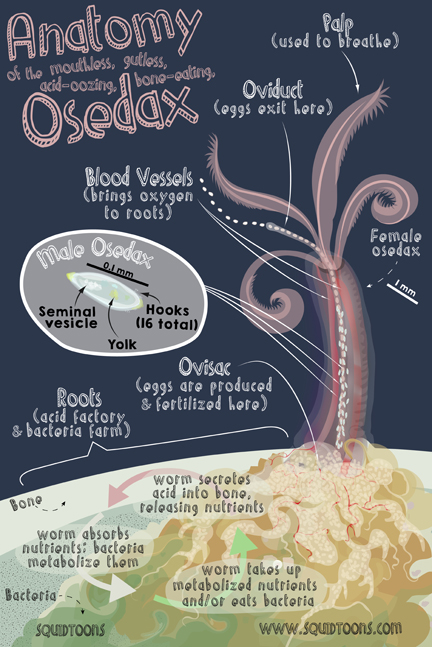 The team also recently completed “Regurgitated Gold,” a comic strip detailing the value of ambergris—or whale vomit—which contains a rare and lucrative chemical desired by the perfume industry, and “The Anatomy of the Osedax,” a detailed schematic of the different parts of the osedax—a strange and other-worldly deep-sea worm that feeds on the bones of dead animals.

In addition to his work with Squidtoons and life as a full-time graduate student, Kwan has been involved in a number of outreach projects targeting diverse communities, including the City Heights neighborhood in San Diego, which houses a large population of refugees from Myanmar (Burma).

“Being an immigrant myself and seeing the struggle made me want to help,” said Kwan, noting that as an English tutor he frequently uses Squidtoons illustrations to pique the interest of students who are having trouble learning a new language.

The future certainly looks bright for Kwan and the Squidtoons team, as they have some exciting new projects in the pipeline. They’re currently collaborating with Scripps graduate student Josefin Stiller and Birch Aquarium at Scripps Curator Leslee Matsushige to develop a comic strip on the mysterious seadragon—which highlights conservation and breeding efforts for this unique species, and touches on the newly discovered Ruby Seadragon.

The Squidtoons team plans to spread the word about their site and ocean science through participation in upcoming outreach events, including the Marine Aquarium Expo in April, and an artistic showcase on the Scripps campus at Surfside on Jan. 29. Nine volunteers recently joined the team, each bringing a unique set of skills to Squidtoons, including editing, blogging, and ramping up the site’s social media presence.

Kwan hopes that the site will gain momentum and that the team will gain access to resources or grants to help support their work, but he said he will never measure the success of the site based on making a financial profit. It’s purely a passion project, aimed at educating the public in a fun, creative way—even if it means a putting in a lot of hard work and sacrifice.

“I look at Squidtoons as a hobby,” said Kwan. “It’s something that I want to do and I feel like if you want something bad enough, you’ll find a way.”