On Board for the 70th Anniversary of an Iconic Science Program

On the 70-year anniversary of the California Cooperative Oceanic Fisheries Investigations (CalCOFI), I had the opportunity to set sail with a team of scientists along with an amazing crew aboard the 170-foot research vessel Bold Horizon. We set off for a 15-day cruise that like those for the 70 years prior aimed to monitor and record oceanographic conditions in the waters off California.

The first cruise in this ocean research program was launched in 1949 with the primary goal of investigating a sardine fishery collapse. Since then, this program has provided not only insight on what happened but has discovered influences as large as El Niño and La Niña climate cycles and as small as microscopic plastic pieces in surface waters.

CalCOFI’s historic route takes trips from Southern California, as far north as Point Conception or San Francisco, depending on the season. Traveling about 300 nautical miles from shore, it stops at 75 to 115 locations (or “stations”) along the way, some of which have been stops since the program’s beginning.

Through its development, CalCOFI has shifted its focus from investigating fisheries collapse to broader management of living coastal resources in the California Current. From this, it has created one of the longest-running records of oceanographic data in the world. These data have been and continue to be used by scientists to create time series of oceanic conditions that span seven decades and play an important role in monitoring the effects of climate change such as ocean acidification and warming surface temperatures.

These days, CalCOFI is a collaboration among Scripps Institution of Oceanography at the University of California San Diego, the National Oceanic and Atmospheric Administration (NOAA), and the California Department of Fish and Wildlife. From each of these agencies, scientists in fields from planktology to marine mammalogy work night and day to collect and analyze data that make these expeditions so valuable. In 2004, it became part of the Long Term Ecological Research (LTER) studies network, and in 2012, CalCOFI was awarded the Ocean Monitoring Service Award by the North Pacific Marine Science Organization (PICES) for its advancement of scientific knowledge about the ocean environment.

As a recent graduate from UC San Diego, I was excited to be a part of this amazing research program that I had learned about during my undergraduate career. Our captain Dylan was just shy of 40 with a SoCal surfer accent to match his laid-back demeanor. The science staff was made up of 18 people and of those, 15 of us were women. I was happy to see that at least in marine science, there are a good number of female scientists working in the field.

Our crew was a team of dedicated engineers from around the country, with some working as real-life modern-day treasure hunters in their spare time. Many of the crew and scientists were seasoned sailors, with some having gone to sea with CalCOFI for as many as 30 years.

The privately owned R/V Bold Horizon was turned into a floating laboratory with equipment to measure everything from temperature to fish egg counts to acoustics. Every surface or shelf of the ship was put to use and equipped with everything the scientists could need to analyze data at sea, as well as duplicates of equipment so any malfunctions would not stop their work. There was a complete laboratory for collecting and identifying fish larvae and eggs, a space for conducting water chemistry, animal observation stations, an acoustic lab for recording marine mammals, and of course a full kitchen complete with espresso machine which, I was told many times was the most important piece of equipment on the ship.

Scientists worked in 12-hour shifts, either noon to midnight or midnight to noon, to maintain scientific operations 24/7. At each station they deployed a variety of equipment. One of the most important was a circular device called a CTD, which stands for conductivity, temperature, and depth. CTD rosettes gather information on the salinity of water, which is used to determine how conductive it is to temperature and is set to make these measurements at predetermined depths. CTDs are also equipped with bottles that collect water samples at different depths that researchers trigger to open and close at different times. These samples are some of the key pieces of data that have allowed the steady tracking of climate change by creating a library of water samples four times a year for several decades.

Scientists also deployed several nets of different sizes at different depths to collect samples of fish larvae and eggs as well as anything else in the water. This included small biological debris, seaweed, and even plastic. NOAA scientists use these data to estimate the abundance and types of fish, evaluate water quality, and assess biological productivity in the coastal waters off Southern California. 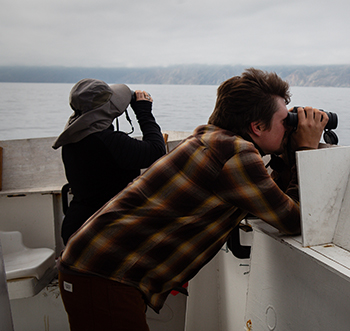 I was part of the observation team along with a sea bird observer from Seattle and my supervisor, Katherine Whitaker, who has worked as a marine mammal observer for more than 15 years. I did my best to absorb the vast knowledge that she had about whale and dolphin behavior as well as how to identify young fur seals from sea lions, which to me still look almost the same. She was able to identify a whale by only seeing the blow as it surfaced at a distance. With her as my mentor, I hope to someday be able to read the animals of the ocean in the way that she does.

Instead of working the normal 12 p.m. to 12 a.m. shifts, the observers worked during daylight hours. We were stationed high on the ship by the bridge where we scanned for mammals and birds from port to stern when the ship was in transit. When animals were sighted, we collected data such as species and number of individuals, and cataloged their behaviors. Then at each station I deployed floating buoys that recorded sounds for up to eight hours to collect any marine mammal communication. With this year’s data and that of the previous years, the Whale Acoustics Lab at Scripps can create time series of what species were either seen or heard.

I will be continuing to work with this data as I move into a master’s program at Scripps. Such data can be used to identify dolphin species by their echolocation clicks by paring these types of visual sightings and recordings of dolphin species, creating temporal maps of species locations and abundances and much more to help protect these amazing animals.

Research like this and so much more is made possible by the amazing scientists and crew that have kept CalCOFI running quarterly for the past 70 years.  I hope to continue to be a part of this amazing program.

Amanda Leu joins Scripps Institution of Oceanography this fall to pursue a master of science degree in marine biology at the Scripps Whale Acoustics Laboratory.