A research team at Scripps Institution of Oceanography at UC San Diego has found that flood damages triggered by atmospheric river storms may triple from $1 billion a year to over $3 billion a year by the end of the century unless action is taken to reduce global greenhouse gas emissions.

The damages could be limited to $2 billion a year if intermediate reductions in emissions are achieved, the researchers said.

“The threat of a megaflood in the western United States is very real,” says lead author Tom Corringham, a climate economist at Scripps Oceanography’s Center for Western Weather and Water Extremes (CW3E). “As atmospheric rivers become more intense, flood damages are on track to triple by the end of the century, but it’s not too late to limit the risk. Reductions in greenhouse gas emissions could significantly reduce projected damages.”

The study results appeared Aug. 12 in the journal Scientific Reports.

Atmospheric rivers (ARs) are long narrow bands of concentrated moisture in the atmosphere, thousands of miles long and hundreds of miles wide, that transport vast quantities of water vapor from the tropics to the mid latitudes. When they reach the mountainous terrain of North America, much of the moisture falls to earth in the form of rain and snow, which can sometimes cause catastrophic flooding. ARs are responsible for the vast majority of floods in California and the western United States.

In 2019, CW3E researchers found that ARs generate more than $1 billion in average annual flood damages in the western 11 states. The new study projects flood damage to the end of the century but researchers say the impacts will be felt sooner. The researchers project that, if no action is taken, expected AR-related flood damages will increase by 10 percent each decade until the 2050s, rising more steeply as the century progresses.

“We know that ARs are already boosted by the changing climate and, as warming continues, we expect a shrinking wet season but increasing rainfall from more potent ARs,” said study co-author Alexander Gershunov, a climate scientist at Scripps Oceanography. “This spells more reliance on floodwater for water resource generation during increasing drought conditions.”

The researchers identified counties in the western U.S. that are most at risk of increased flood damages, including Sonoma, Yuba, and Sacramento counties in California, Washoe County in Nevada, and Lewis County in Washington. Other areas at risk include Los Angeles, Seattle and the western Puget Sound area, and the border of Oregon and California. 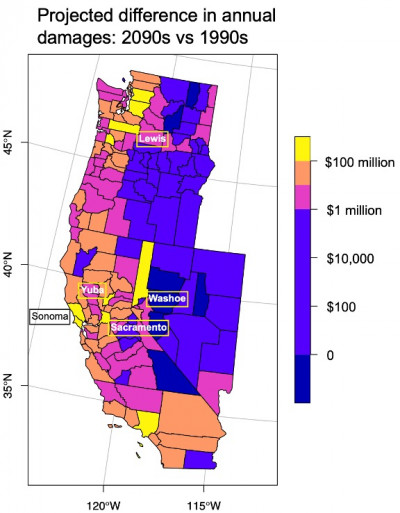 The projections, based on 16 global climate models linked to flood insurance records, and adjusted for inflation, assume that flood exposure and vulnerability will remain constant at current levels. The increase in damages is due to the intensification of ARs as a warmer atmosphere holds and moves more water vapor, particularly in near-saturated ARs. Increased development in floodplains could further increase damages, while investments in flood protection could reduce expected damages.

Co-authors include Scripps CW3E members James McCarthy, Tamara Shulgina, Alexander Gershunov, Daniel Cayan, and Marty Ralph. The research was supported by the U.S. Bureau of Reclamation, the U.S. Army Corps of Engineers, the California Department of Water Resources, the California Nevada Climate Applications Program (CNAP), the Southwest Climate Adaptation Science Center (SW CASC), and the Multi-Campus Research Programs and Initiatives through the University of California Office of the President.