A long-feared scenario in which global warming causes Arctic permafrost to melt and release enough greenhouse gas to accelerate warming and cause catastrophe probably won’t happen.

That is the conclusion of a study, appearing Feb. 21 in the journal Science, that began more than 20 years ago as a query posed by Jeff Severinghaus, a geoscientist at Scripps Institution of Oceanography at the University of California San Diego. A research team led by the University of Rochester that includes Severinghaus analyzed samples of gases trapped in ice during a period of deglaciation between 18,000 and 8,000 years ago. That period is considered an analogue for the current era of global warming.

The researchers conclude that even if methane is released from permafrost and other stores known as methane hydrates, very little actually reaches the atmosphere.

“It is a rare piece of good news about climate change,” said Severinghaus, who began pursuing the question in the 1990s, “so I’m happy to come to the public and say this burp is something we don’t have to worry about.”

When plants die, they decompose into carbon-based organic matter in the soil. In extremely cold conditions, the carbon in the organic matter freezes and becomes trapped instead of being emitted into the atmosphere. This forms permafrost, soil that has been continuously frozen—even during the summer—for more than one year. Permafrost is mostly found on land, mainly in Siberia, Alaska, and Northern Canada.

Along with organic carbon, there is also an abundance of ice in permafrost. When the permafrost thaws with rising temperatures, the ice melts and the underlying soil becomes waterlogged, helping to create low-oxygen conditions. That creates an ideal environment for microbes in the soil to consume the carbon and produce methane.

Severinghaus had first considered using carbon-14 to determine how much methane from ancient carbon deposits might be released to the atmosphere in warming conditions in the 1990s. He and his student Petrenko began pursuing the idea in 2001 and began collecting air samples in Greenland, but the task was not easy. Only about one part of methane exists in 1 million parts of air and only one out of every trillion parts of carbon is in the form of carbon-14. 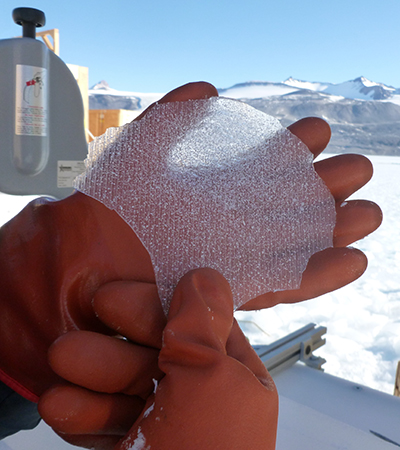 The team drilled and collected ice cores from Taylor Glacier in Antarctica, where they could find purer air samples than those found in Greenland. Each contained bubbles with small quantities of ancient air trapped inside.

The research for the present study led by Dyonisius focused on measuring the composition of air from the time of Earth’s last deglaciation, 8,000-15,000 years ago.

“The time period is a partial analogue to today, when Earth went from a cold state to a warmer state,” Dyonisius said, “but during the last deglaciation, the change was natural. Now the change is driven by human activity, and we’re going from a warm state to an even warmer state.”

The researchers concluded that the methane released does not reach the atmosphere in large quantities. They believe this is due to several natural “buffers,” such as methane-eating microbes in the top few inches of soil above permafrost that intercept the gas before it reaches the atmosphere.

“We can probably thank those little bacteria for saving our bacon,” Severinghaus said.

The data also show that methane emissions from wetlands increased in response to climate change during the last deglaciation, and it is likely wetland emissions will also increase as the world continues to warm today.

The good news about one source of methane is tempered by another report on modern-day methane emissions that was released Wednesday in the journal Nature.  The Nature study, co-authored by Severinghaus, Petrenko, Dyonisius, and many of the other contributors to the permafrost paper, concluded that human-caused fossil fuel methane emissions have been underestimated by as much as 40 percent.

“Anthropogenic methane emissions currently are larger than wetland emissions by a factor of about two, and our data show that we don’t need to be as concerned about large methane releases from old carbon reservoirs in response to future warming,” said Petrenko.  “Instead we should be more concerned about the methane that is being released from human activities now.”

– The University of Rochester contributed to this release