Coastal Heat Waves Can Tax Public Health - Even Outside of Summer

Heat waves driven by Santa Ana winds can cause perceptible impacts on  hospitalizations for kidney failure, dehydration, and respiratory disease in fall, spring, and winter according to a team of San Diego scientists.

Epidemiologists and climate scientists from the University of California San Diego, San Diego State University, and CalEPA said the number of cases and their association with weather events is significant enough to broaden the use of heat warnings beyond summer.

“This is one of the first studies to consider the health effects of extreme heat events that occur outside of the summer season, and the first to consider the role of Santa Ana winds in this association,” said study lead author Lara Schwarz, a graduate student in the Joint Doctoral Program in Public Health, Global Health at UC San Diego and San Diego State. “It also highlights the value of considering local climatic phenomena such as Santa Ana winds and their implications in studying the impacts of climate on health.”

For example, there were 383 people diagnosed with acute kidney (renal) failure that the researchers attributed to extreme heat events occurring outside of summer in the Southern California coastal region. Cases of kidney failure attributable to heat waves can be a consequence of dehydration or heat illness, which is often misdiagnosed. That compares to 1,450 heat-related renal failure cases during summer months when temperatures rose above 36° C (96° F) during that same time period. Similar surges in hospitalizations for dehydration and respiratory distress took place during non-summer months. The 779 respiratory hospitalizations reported in spring can be compared to 1,089 heat-related hospitalizations in summer months during the study period.

The study will appear in an upcoming issue of the journal Environmental Research Letters but the accepted manuscript is available online. It was funded by a University of California Office of the President Multi-campus Research Programs and Initiatives grant. 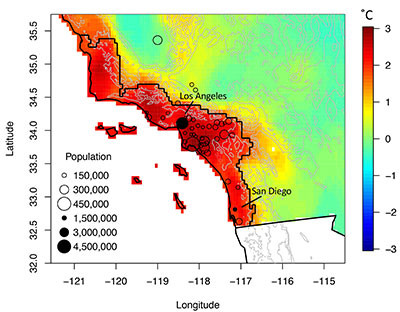 Understanding heat impacts of Santa Ana winds is also important in the context of other possibly co-occurring health stressors, the researchers said. Santa Ana winds are known to fan backcountry wildfires, blowing smoke towards the populated coast and impacting respiratory health. The flu season occurs at the same time as the Santa Ana wind season, ramping up in fall and ebbing in spring. Compounding smoke and flu impacts by heat has not been quantified, but can potentially drastically increase the risk to coastal communities.

The collaboration among scientists whose fields rarely converged in the past is itself noteworthy, said research team members. Such joint research will become increasingly common as the focus of climate science expands from identifying and understanding natural phenomena to diagnosing the effects of those phenomena on society.