A promising brain cancer drug discovered from a deep sea ocean microbe by researchers at Scripps Institution of Oceanography at University of California San Diego is making headway toward public use.

Chemist Bill Fenical and microbiologist Paul Jensen collected the microbe from sediments in the bottom of the tropical Atlantic Ocean in 1990. A compound that it produces is now being tested on patients with the brain cancer glioblastoma at hospitals across the globe in a study nearing its final test phase, proving the continued value of products derived directly from nature.

“It proves beyond the shadow of a doubt that the ocean is a resource for drug discovery,” said Fenical, who specializes in marine natural products chemistry and marine pharmacology.

The National Science Foundation funded the pair’s exploratory research in the Bahamas, where they collected seafloor sediment samples using spring-loaded samplers launched over the side of a small boat.

In one ocean sediment sample found 1,110 meters (3,642 feet) below the surface of the ocean, there were 20,000 different bacteria. Within this large amount of bacteria, one group stood out as unusual because it showed clear evidence of being adapted to life in the ocean.

“Our graduate student Tracy Mincer showed they were unique organisms no one had seen before,” Fenical said.

In fact, what Fenical and Jensen had discovered was an entirely new genus or group of marine bacteria, which they subsequently named Salinispora. Following the premise that new bacteria adapted to poorly studied environments like ocean sediments may produce new natural products, they investigated whether compounds produced by these bacteria could kill cancer cells grown in the lab. This effort led to the discovery of a unique and highly potent anticancer agent, salinosporamide A, which the U.S. Food and Drug Administration officially renamed Marizomib. 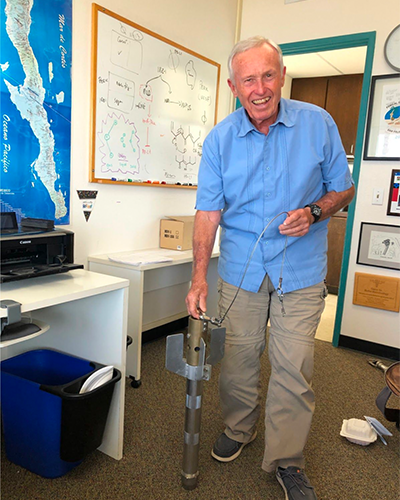 Fenical’s lab—part of the Center for Marine Biotechnology and Biomedicine at Scripps—routinely subjected the marine natural products it discovered to cancer cell testing as part of a grant funded by the National Cancer Institute. During the discovery phase, the lab found Marizomib was a potent inhibitor of the cancer cell’s proteasome, the part of a cell that degrades unwanted proteins and allows the cell to grow and multiply.

“It killed them dead,” Fenical said. “And it did so for all types of cancer cells.”

Initial clinical trials revealed tumors went into remission on some patients taking the test drug. In another study, Marizomib may also be a promising less-toxic drug for patients with the blood disease multiple myeloma. That attracted the biopharmaceutical company Celgene, which acquired rights to Marizomib in 2016.

Researchers then made what Fenical called a “profound discovery”: Marizomib can pass through the blood-brain barrier, an almost impenetrable boundary between the brain’s blood supply and the rest of the blood circulatory system.

“That’s what makes brain tumors like glioblastoma so difficult to treat,” Fenical said. And that’s precisely what piqued the interest of companies like Celegene, which made significant investments in the development of this compound to attack brain cancers.

Marizomib has a lipophilic structure, meaning it can dissolve into lipids and fats, which probably allows it to penetrate the blood-brain barrier, according to Dr. Patrick Roth, principal investigator of the drug’s third clinical trial phase sponsored by the European Organisation for Research and Treatment of Cancer (EORTC). The EORTC is leading the investigation into Marizomib’s ability to treat glioblastoma.

Glioblastoma is the type of brain cancer that claimed Sen. John McCain’s life in August 2018. It’s generally considered an incurable cancer, leading to mortality within 15 months after diagnosis. The only treatments available are radiation and chemotherapy, which McCain began undergoing in 2017. The National Cancer Institute estimated 22,850 adults are diagnosed with brain and nervous system cancers per year in the US. Glioblastoma accounts for just over half of all primary brain tumors, the institute reported. 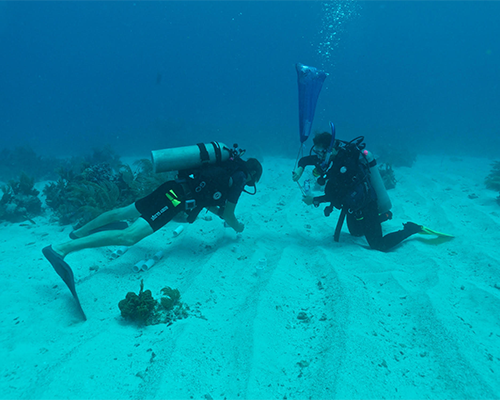 “We are excited about the potential of Marizomib and look forward to seeing the results of the ongoing phase three clinical trial,” said Victoria Amari, a representative from Bristol-Myers Squibb/Celgene.

And why has it taken nearly 30 years from the initial Bahamas discovery for Marizomib to get to this point? The time frame, while long, is not uncommon, says Fenical. Most current drugs require similar long development times for reasons including procuring funding, identifying the right type of cancer to target, finding a company able to get the drug to market and more. Taxol, an anticancer drug from the Pacific Yew tree took 30 years before its utility was recognized.

Marizomib is also unusual because it is being developed in the exact, native form made by the bacteria. The drug is produced by growing large volumes of Salinispora bacteria and isolating the compound from these cultures. Once purified, it is administered directly to patients, often combined with other complimentary chemotherapeutic drugs.

“Nature made the ideal drug,” said Jensen of Scripps Oceanography. “Chemists have tried to improve the activity of the compound, but nobody could come up with anything better than what is produced in nature.”

Fenical and Jensen are pioneers in discovering medicines derived from the ocean, along with others at Scripps including marine chemical biology professors Bradley Moore and William Gerwick, who both share joint appointments with UC San Diego’s Skaggs School of Pharmacy. They follow in the footsteps of Claude E. ZoBell, considered the “father of marine microbiology” and a trailblazer at Scripps Oceanography. Until ZoBell’s contributions to the field, the ocean was ignored as a potential source for new drugs and products in favor of what could be found on land. 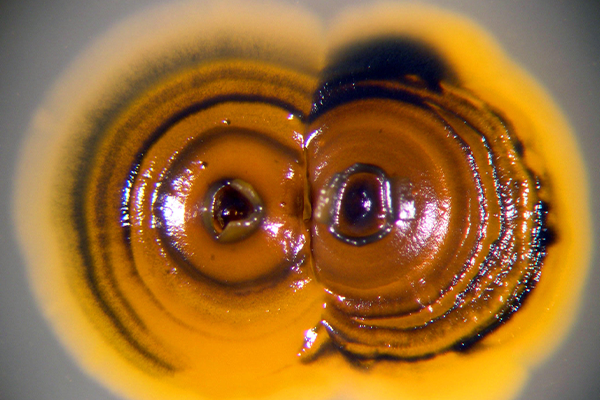 “If this is approved, it’ll be the first marine microbial natural product to become a drug and that’s a big deal not only for us but for everyone who works in this field, and especially for the patients in need of better treatments for glioblastoma,” Jensen said.

Moore has also advanced the research around Marizomib. In research funded by the National Cancer Institute, Moore’s lab has decoded the bacterium's genome to understand how it makes salinosporamide, how it protects itself from the toxin, and how it can be genetically reengineered to improve properties of drugs.

Currently, graduate student Katherine Bauman, who works in the Moore Lab as an NIH Marine Biotechnology graduate trainee, continues to research Marizomib. Bauman explained that Marizomib is made from three distinct pieces that come together to form a chemically unusual structure with potent bioactivity. However, scientists do not yet fully understand how that structure is actually assembled in the bacterium.

“Nature designed the most perfect structure,” said Bauman. “If we can understand the enzymes that make this molecule, we can make more versions of the molecule, which could have more applications for other diseases.”

For instance, Marizomib has already proven to be effective against malaria, a life-threatening disease caused by mosquito-borne parasites. If scientists can alter Marizomib to more effectively target the parasite proteasome that causes malaria, then it could be turned into a drug to fight that disease.