How Many Parasites Can a Bird Carry?

A team of ecologists at Scripps Institution of Oceanography at UC San Diego has made a breakthrough that has implications for multiple fields within biology as well as epidemiology.

Ecologist Ryan Hechinger and colleagues tested a new way to predict the parasite load carried by California shorebirds they collected and analyzed. The principles they describe, however, could apply to any organism that hosts parasites, including humans. Hechinger describes parasites as the “dark matter” of ecosystems: they are ubiquitous and a key component of energy flow through those systems, but their ecological function is often overlooked.

The study appears today in the journal Proceedings of the Royal Society B. In it, Hechinger’s team – including Kate Sheehan, a former postdoctoral researcher in Hechinger’s lab now at Frostburg State University in Maryland, and Hechinger Lab Manager Andrew Turner – describes how the amount of space inside or on a host, whether it be an ostrich or hummingbird, elephant or mouse, has less to do with the total parasite load it can carry at any given time and is more related to how much energy it can supply to those parasites.

The conclusion represents a new line of thinking in parasitology. It upends a traditional ecological mantra that available space is the most important resource in determining a host organism’s capacity for carrying parasites. Hechinger started with a principle known as the metabolic theory of ecology, which is used to estimate a range of biological conditions such as how many calories an organism burns given its body size, how fast the organism grows, or how large populations are likely to become. He applied it to parasite-host relationships to find that each host’s parasite load stays within a certain range based not simply on the host’s size but on how much energy it can provide the parasites for sustenance.

In work funded by a National Science Foundation grant and by the Eppley Foundation for Research, Hechinger’s team collected a variety of California shorebirds from estuaries ranging from Tomales Bay near San Francisco to San Diego’s Mission Bay. The largest collected were Canada geese, the smallest were Least sandpipers. The total number of parasites on each bird was then counted in Hechinger’s laboratory. 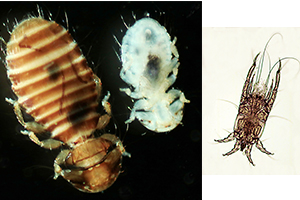 “This is a macroecological pattern that no one has ever seen before,” said Hechinger.

While the total number of individual parasites might have varied from bird to bird, the maximum load of those parasites remained constantly in proportion to the energy the bird was capable of supplying them, regardless of what kind of bird. Hechinger says the finding shows the promise of the theory to understand the role of parasites in complex ecosystems.

“We can establish baseline expectations for parasite load for a great variety of animals and plants,” said Hechinger, who added the principle can also help predict the spread of new diseases from wildlife to people, for instance.