Photo of the Week: Solar Spectacle

Just over a hundred years ago, Scripps Oceanography picked a spot of "smoother and better water" 300 feet north of the institution's main building to build a wooden pier that would be used for launching boats, pumping seawater, and conducting a variety of scientific experiments. The current concrete Ellen Browning Scripps Memorial Pier that replaced it in 1988 shared the same alignment, perpendicular to the shore.

As it happens, thanks to the tilt of the earth and the planet's progression around the sun, the sunset migrates north and south along the horizon during the year, and for a few days in May and August the length of the pier points at the spot where the sun is setting in an alignment that has come to be known as Scrippshenge.

The picture above was taken by Scripps's Communications office during this month's alignment. 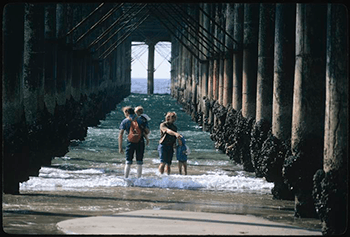 This image from Scripps Institution of Oceanography archives shows the view under the previous wooden pier in 1974. Note the piling in the middle of the opening at the far end.