Photo of the Week: Welcome to Space

Astronaut Jessica Meir is greeted by members of Expedition 60 at the International Space Station (ISS) six hours after blasting off from Baikonur Cosmodrome in Kazakhstan, as seen in a NASA broadcast. The Scripps Institution of Oceanography at UC San Diego alumna will be on board the ISS until spring 2020, conducting a wide range of science experiments during her mission. Meir is a member of the 2013 class of NASA astronauts.

"It feels like home already," said Meir in a response to a question beamed from Earth Thursday. "It's going to be an amazing six months." 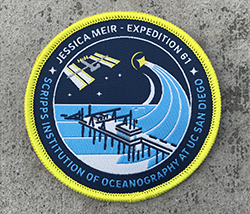 Scripps art director Chris Toombs designed a commemorative patch for Meir to bring with her to the ISS. The imagery of the patch was inspired by Meir soaring past her time at Scripps and getting one step closer to the her childhood dream of going to the moon. The crescent moon is a nod to the 50th anniversary of the Apollo 11 mission. Six stars on the patch represent each member of Meir's family, whom she credits for their support and inspiration.