The scientific drilling vessel JOIDES Resolution made waves recently with a rare appearance in San Diego. Docking at the B Street Pier from Sept. 15-21, 2019, the vessel—also known as the JR—captured the attention of the public and the ocean science community. It was the ship’s first port call in the United States in more than a decade. The ship will return to San Diego in November for another brief port call before heading back to sea.

The JOIDES Resolution is world-renowned for its ability to drill deep into the ocean floor to study the geology below and unravel Earth’s secrets. Scientists, including many from Scripps Institution of Oceanography at UC San Diego, use data and sediment cores collected by the JR to better understand climate change, ocean currents, earthquakes, volcanoes, and Earth’s history. (View photo gallery.)

“It’s like visiting an old friend,” said Dick Norris, professor of paleobiology at Scripps Oceanography. Norris said he’s built his career around the JOIDES Resolution, having participated in six research expeditions on it over the years, serving as chief scientist for two of those cruises.

The JOIDES Resolution is important, said Norris, because it allows scientists to look at how Earth processes worked in the past to gain insight about what we expect to happen in the future.

“I've spent a lot of my career drilling into sediments that are from the last really globally warm periods. The idea is to understand what a warm Earth looks like, because we anticipate that the Earth will begin to resemble the climatology of those much warmer ‘ancient Earths’ in the next 80 years,” said Norris. “You're opening these cores and you see this record of a warm planet, and you can begin to deduce things right away about what that vanished world was like.”

The JOIDES Resolution is funded by the National Science Foundation and more than 20 international partners and is one of the most active scientific drilling ships in the world. Since it started drilling for science in 1985, the JR has recovered over 300,000 meters of ocean sediments and crust from over 1,000 locations beneath the world’s oceans. It has been used by the International Ocean Discovery Program (IODP) since 2004, and the IODP Science Support Office has been housed at Scripps Oceanography since 2013.

“It’s hard to overstate the significance of the JR, which is truly a unique national research facility in its ability to reach inaccessible parts of our planet,” said Holly Given, director of the IODP Science Support Office at Scripps. “There is no other scientific drilling platform that has its reach.”

During the JR’s brief visit to San Diego, Norris and several others from Scripps led tours of the ship, which spans 467 feet in length and has a drilling derrick that rises 200 feet above the water line. The ship can drill nearly six miles beneath the ocean surface, where it plumbs the seafloor to collect sediment and rock cores.

Core samples from the JOIDES Resolution have been essential in confirming the theories of plate tectonics and continental drift, documenting climate extremes over the last 100 million years, and providing evidence of catastrophic events such as the meteor impact that led to the extinction of the dinosaurs.

“Using these sediments, which have been lying undisturbed on the seafloor for millions of years, we can reconstruct Earth's history in ways that are difficult, or maybe impossible, to do with terrestrial geology, where sediments decompose, are eroded by weather, or disturbed by tectonics,” said Given. 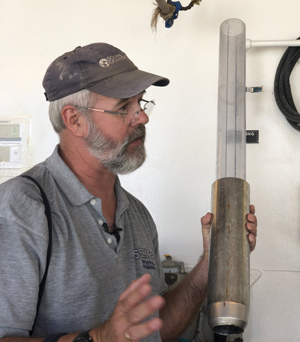 The ship is an indispensable tool for discovery and for its potential benefits to people, said Norris. For example, researchers are finding communities of microorganisms that thrive deep in the ocean crust, one of the most extreme environments on Earth.

“We really understand the deep ocean far less than we think we do,” said Norris. “On the discovery side, we really don’t know what the limits of life are. How deep inside rocks can it go, how hot can it go, how acidic can it be. What are the conditions in which life finally gives up and says, ‘We’re done.’’’

Norris described the excitement of getting his hands on core samples for analysis. He has found fossils of sea creatures such as ammonites, which look like giant snails, from tens of millions of years ago.

“It's like Christmas every day,” said Norris. “You're popping open these cores and you're seeing mud that was from a time in Earth’s history long before people, when all sorts of things were going on in the planet that are, oftentimes, still very relevant to today.”

The science of ocean drilling can trace a large part of its origin to Scripps Oceanography. Renowned Scripps geologist Gustaf Arrhenius had been recruited to join Scripps by then-Director Roger Revelle in 1953 after Arrhenius had taken part in the world’s first large-scale endeavor to recover ocean-bottom sediment cores. Arrhenius’ work during the Swedish Deep-Sea Expedition of 1947-48 had been the basis of his thesis as a student at the University of Stockholm. Arrhenius came to Scripps to participate in the 1953 Capricorn expedition, retrieving cores of seafloor sediment from the Pacific Ocean.

Later, that expertise helped spark Project Mohole, an effort to drill through the thin ocean crust and directly sample Earth’s mantle. As part of Project Mohole, Scripps technologists invented a technique that used sound waves sent from seafloor beacons to continuously adjust the ship’s position over a drilling target, holding it steady in high seas and strong currents. Today this same method—called dynamic positioning—uses GPS signals to keep the JOIDES Resolution on target.

Over the JR's lifetime with NSF’s scientific ocean drilling programs, 46 Scripps scientists have participated in research expeditions, with several of those people participating in numerous cruises. 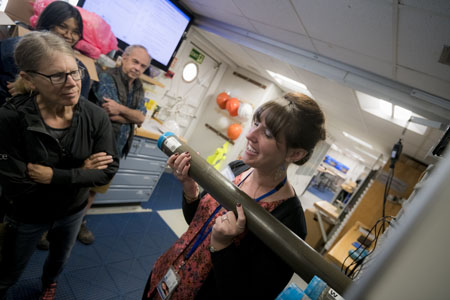 Life on the Ship

Work aboard the JOIDES Resolution never ceases and operations continue 24 hours a day. The ship can host as many as 50 scientists and technicians and 65 crew members. Expeditions are usually two months long, with scientists working 12-hour shifts, night and day, to maximize their time aboard the ship. Remaining hours are spent sleeping, eating, exercising in the gym below deck, or partaking in group activities such as movie screenings. There’s even a daily cookie break.

Many scientists wait their whole career to participate in a cruise on the JOIDES Resolution, said Norris. He called the research cruises “great fun” and said that he particularly enjoys the collaborative aspect, meeting and working with scientists and crew from all over the world.

“You meet people and get to know them in a way that you would not on a cruiseliner or something like that,” said Norris.

Lisa Tauxe, a Scripps geophysicist and professor, has participated in a handful of cruises on the JR and called the experiences transformative.

“I began my career on the Glomar Challenger's Leg 73, an adventure that changed my life. I have now been on four more expeditions aboard the JOIDES Resolution,” said Tauxe. “Each time was a transformative experience because of our mission and the outstanding scientists, technicians, engineers, captains, cooks, stewards, and all who dedicate their time and expertise to ocean drilling. It is always a great privilege and the thrill of the words ‘CORES ON DECK’ never gets old.”

During the last several cruises, Tauxe began writing a series of haikus, posted to her Twitter account, describing what was happening onboard the ship.

dripping from the deep

This expedition, known as the Arabian Sea Monsoon, took place off Sri Lanka and India. Tauxe and other researchers on the expedition aimed to understand the interaction between the Himalayas and Tibetan plateau uplift and the development and evolution of the Indian summer monsoon.

The JOIDES Resolution was in San Diego for several days before departing to the Gulf of California for Expedition 385, where scientists are coring seven sites in the Guaymas Basin to investigate the relationship of tectonics, magmatism, sedimentation, carbon cycling, and microbial activity. You can follow the ship’s journey through the expedition’s official webpage and daily blog.

The ship is scheduled to make a port call in San Diego at the end of the Guaymas Basin expedition on November 16.

The MAPP project will examine the relationship between low cloud “hot-... 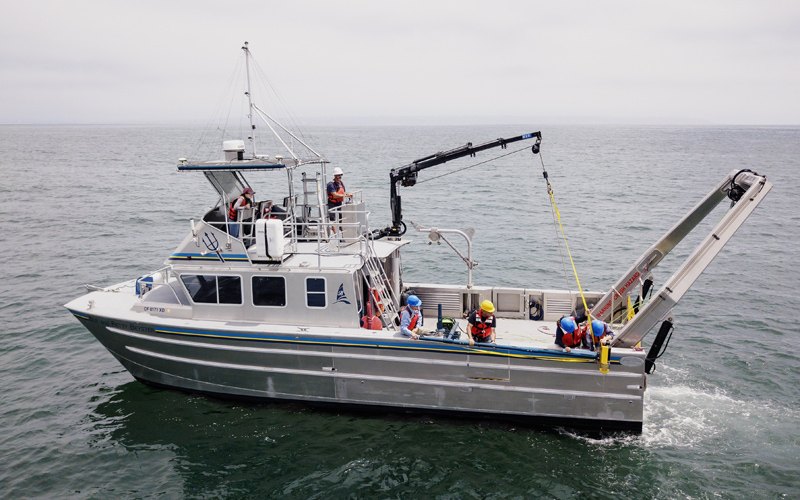 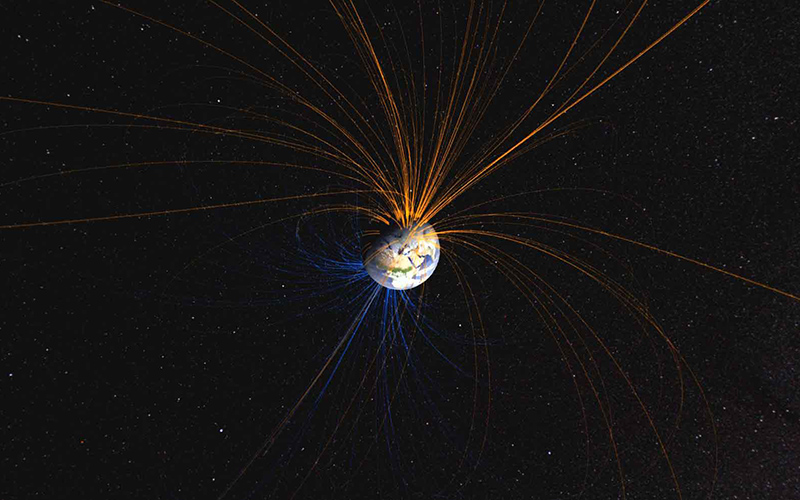