Research Highlight: Scientists Bring the Ocean into the Lab to Study Human Impacts on the Ocean and Climate

A wave channel the length of a basketball court at Scripps Institution of Oceanography at UC San Diego is facilitating an unprecedented study on the impacts of human pollution on the climate.

This summer, the NSF Center for Aerosol Impacts on Chemistry of the Environment (CAICE) at UC San Diego is leading the Sea Spray Chemistry And Particle Evolution project, or SeaSCAPE, a novel experiment in which scientists are unraveling complex ocean-atmosphere interactions. The focus of the project is to understand how human pollution interacts and reacts with ocean emissions of gases and aerosols—and ultimately affects cloud formation, air quality, and climate.

“We’ve transferred the full complexity of the ocean-atmosphere into the lab with the SeaSCAPE experiment, and now that we’ve added in reactions, we're learning things more quickly than I expected,” said CAICE Director Kim Prather, Distinguished Chair in Atmospheric Chemistry at UC San Diego. “The largest uncertainty in all of climate change is aerosol-cloud interactions. If we can figure out how rapidly human pollution is impacting emissions from the ocean, then we can determine how humans are disrupting the ocean’s ability to control climate.”

Funding for the experiment comes from the National Science Foundation (NSF), which supports CAICE—the largest federally funded center in the history of UC San Diego.

More than 90 faculty, undergraduates, graduate students, and researchers from 12 institutions are taking part in the SeaSCAPE project, replicating the biological, physical, and chemical complexity of the ocean in a 33-meter (108-foot)-long wave tank using state of the art equipment and real-time monitoring.

When waves break, they launch sea spray aerosols containing salt and other living materials such as bacteria and viruses into the atmosphere. In addition, gases are released from the ocean which can react and form more aerosols. CAICE scientists are interested in studying how sea spray aerosols—tiny bits of living and inorganic matter—and other marine aerosols are affecting the formation of clouds over the ocean, which covers 71 percent of Earth’s surface and plays a large role in regulating the planet's temperature.

Previous large scale CAICE experiments, such as IMPACTS in 2014, also utilized the wave channel housed in the Scripps Hydraulics Lab to study ocean-atmosphere interactions in a controlled environment. Those studies mainly focused on how biological processes in the ocean induced changes in sea spray aerosols over the course of a phytoplankton bloom to understand the ocean’s influence on climate and cloud formation.

The SeaSCAPE project goes a step further by looking at the emissions of gases and particles coming out of the ocean and how the chemistry and climate-relevant properties are being modified by human pollution. The key question SeaSCAPE is addressing is how much and how fast human pollution is changing the ability of the ocean to control clouds and climate.

To conduct the experiment, researchers fill the wave flume with seawater collected at the Scripps Pier and then generate continuous waves using a custom-engineered paddle. The seawater is then spiked with nutrients to create a phytoplankton bloom. Researchers use a wide range of sophisticated equipment to measure the composition of the gases and particles that are emitted as waves break over the course of the life cycle of the bloom.

Clean air is pumped in over the flume enabling the isolated study of reactive gases and particles. This enables researchers to obtain a baseline look at the chemistry that happens when a wave breaks and particles and gases are emitted into the atmosphere.

“When highly reactive gases are emitted over the open ocean, they immediately react with pre-existing pollutants so you miss detecting them unless you happen to be at the perfect location at just the right time which is almost impossible. But in the lab, the air above our ocean is clean, so they do not react. They just sit there and wait for us to measure them,” said Prather. “So right now we're measuring a huge array of gases which people have not been able to look at before and watching them evolve over the course of a bloom, and that's turning out to be extremely informative.”

The controlled setting also allows for scientists to make continuous measurements of temperature, dissolved oxygen, carbon dioxide, and chlorophyll in seawater—all crucial components which affect algae blooms. As each wave breaks, aerosols and particles are sucked out of the headspace and into a range of attached instruments, including multiple mass spectrometers, for analysis and characterization. Seawater as well as airborne particles and gases are also being collected for more detailed off-line analysis, such as identifying which microbes are present in the air and water.

SeaSCAPE researcher Michael Alves said that ocean and atmospheric chemistry can be so complex that field studies can sometimes only provide a snippet of information, similar to someone opening a book to a random page and then trying to figure out what the plot is. But this experiment is different.

“Here, we get something closer to the chapter of a book, where we can see the progression of a certain species or a certain type of chemistry happening over the course of multiple weeks,” said Alves, a PhD student at UC San Diego’s Department of Chemistry and Biochemistry.

Alves first came to Scripps Oceanography in 2016 for a summer undergraduate internship with CAICE. That experience inspired him to pursue a PhD at UC San Diego, where he now works in the lab of Distinguished Professor Vicki Grassian, co-director of CAICE. He’s currently researching marine-dissolved organic matter, which he describes as “the sum of all those things that add to the organic crockpot of the ocean,” and he’s also looking at how sunlight affects the composition of the ocean and atmosphere. 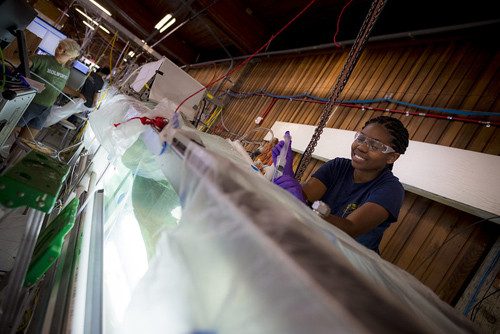 Alves’ research is just one piece of the SeaSCAPE research puzzle, all aimed at understanding the reactions that take place when gases and particles come out of the water. Researchers are finding that as the emitted gases react, they stick to pre-existing particles or can make new particles, processes that change the composition of the marine atmosphere.

Prather is hopeful that this experiment will help pinpoint which pollutants from human activities, such as smoke from car exhaust or wildfires, are most detrimental to the environment—important information for policymakers looking to address climate change. She said that she hopes this research will lead to improved climate models, as current computer simulations don’t adequately account for the ocean’s influence.

“Our dream is to really be able to help climate models properly treat how human pollution is impacting the ocean and its ability to control our clouds and climate,” said Prather.

She also noted the complexities of working on such a large-scale experiment with researchers ranging from seasoned scientists to summer interns gaining their first experience working in the lab.

“This is the most challenging project I've ever worked on, but it's still easier to learn things from this approach in the lab where we have control of the system,” she said. “We’ve got a lot of really smart people with many diverse ideas and we’re all working together to understand and help protect our planet.”

Future research on the ocean and atmosphere will be facilitated by a state-of-the-art instrument that’s set to be constructed on the Scripps campus. The Scripps Ocean Atmosphere Research Simulator (SOARS), also funded by NSF, will mimic the ocean with unprecedented accuracy, capturing the interactions of wind, waves, microbial marine life, and chemistry at the sea surface in a laboratory setting. It’s expected to be completed in 2021.