About 125,000 years ago, the last time the Earth was as warm as it is today, global average sea level stood much higher than it does now.

“Sea level is too low. We’re in a sea-level deficit,” said Jamin Greenbaum, a research geophysicist at UC San Diego’s Scripps Institution of Oceanography. The difference between then and now is about six to nine meters (19.7 to 25.5 feet) of sea level. “We understand that no more than two meters came from Greenland and about one meter came from ocean thermal expansion and other small glaciers during the last interglacial period.”

That leaves Antarctica to account for the three to six meters of missing sea level. And with sea level rising at an accelerating rate, the challenge to pinpoint where the deficit will come from has become especially important in the context of the last interglacial period.

One of the world’s coldest places remains a global hotspot in terms of climate and ecology research but the COVID-19 pandemic prevented Scripps Polar Center researchers and colleagues from visiting Antarctica during the 2019-2020 field season. Greenbaum is among several researchers who will spend part of this austral summer field season attempting to answer various delayed but pressing scientific questions.

Cusick, now on her fifth Antarctic expedition, is a co-founder of the citizen scientist Fjord Phyto program. Fjord Phyto enlists cruise ship tourists to help monitor changes in the microscopic life that live within coastal fjords. Although invisible to the human eye without the use of a microscope, phytoplankton provide more than half of Earth’s annual variability on atmospheric oxygen.

The active summer season occurs from November to March on the Antarctic Peninsula, but last year the COVID-19 pandemic interrupted travel for scientists and tourists alike.

“My research and data collection depend on our citizen science collaboration with tour vessels bringing travelers to Antarctica,” Cusick said. In the 2019-2020 season, “I did not have any data collections, breaking a seasonal time series we had going since 2016,” she said.

Following a week-long quarantine period in Chile, Cusick went back to sea in late November with newly funded support from NASA. She will return to San Diego in January 2022.

“This is our pilot season to get everything back on track and implement the new additions to the program that will help us validate, or ground-truth, satellite data using field measurements and sampling,” she said.

Citizen scientists aboard cruise ships operated by six tour companies are taking measurements of water temperature and salinity using Conductivity-Temperature-Depth (CTD) probes, water cloudiness in the uppermost layer of water receiving phytoplankton-feeding sunlight, and the amount of water-reflected sunlight. Each time a ship visits a specific location repeatedly during the season, they also take samples of glacial meltwater and phytoplankton for identification using microscopy and DNA sequencing. New CTD instrumentation will also have a chlorophyll-a sensor, and a new app called HydroColor will allow participants to take images of sky, water, and ocean color reflectance data.

Hannah Adams left San Diego on Jan. 8 for her first trip to Antarctica. After quarantining for a week in Ushuaia, Argentina, Adams, who is fluent in Spanish, will then depart on a 16-day research cruise through the Drake Passage to the West Antarctic Peninsula. She will be participating in a Spanish research expedition led by Chief Scientist Jordi Dachs because of shared interests between her advisor, Amina Schartup, and Spanish researcher Andrea Bravo.

During the cruise, Adams will analyze water samples collected from the Southern Ocean for traces of dissolved mercury.

“Much of the research into mercury biogeochemistry has been focused on the Arctic Ocean. There isn’t much data for mercury in Antarctica and the Southern Ocean,” Adams said. “I’m excited to build on mercury data the scientific community already has. Hopefully, we can see how this region compares to other oceans and regions.”

Mercury concentrations in the majority of the oceans do not reach a toxic level, she noted, but they could potentially become toxic when the element accumulates as it moves up the food chain, a process called biomagnification.

Tammy Russell will also make her first trip to Antarctica in January 2022 following a week-long quarantine in Chile. For about a month she will stay at the Copacabana Field Station on King George Island, off the tip of the Antarctic Peninsula. She will be assisting the NOAA Southwest Fisheries Science Center’s Antarctic Ecosystem Research Division (AERD) with data collection that assesses the health of krill-eating Antarctic seabirds. She will also collect penguin guano for her research on microplastics.

The initial wave of the pandemic and its accompanying restrictions prevented AERD researchers from working in the field last year, which disrupted the long time-series data that they collect, leaving a gap in the data time series used in Russell’s microplastics work.

“Instead of having three years of guano samples, after this year’s sample collection I will have samples from pre-COVID and post-COVID,” Russell said. “There was limited human presence in this region during the 2020-2021 season. Comparing samples from before and after may provide us with insights on how local activities contribute to marine microplastic pollution.”

During the 2019-2020 season, researchers had collected guano samples from two species of brush-tailed penguins. Scripps Oceanography scientists are now analyzing those samples for microplastics and diet composition. The “Penguano Project” is a collaboration between the Vernet laboratory, AERD, and Jeff Bowman’s laboratory at Scripps Oceanography.

“We know that microplastics have previously been found in seawater samples around the Antarctic Peninsula and in the diets of penguins in the sub-Antarctic islands, but the extent of microplastic exposure to penguins in this region is unknown,” Russell said.

Physics connects seismic data to properties of rocks and sediments 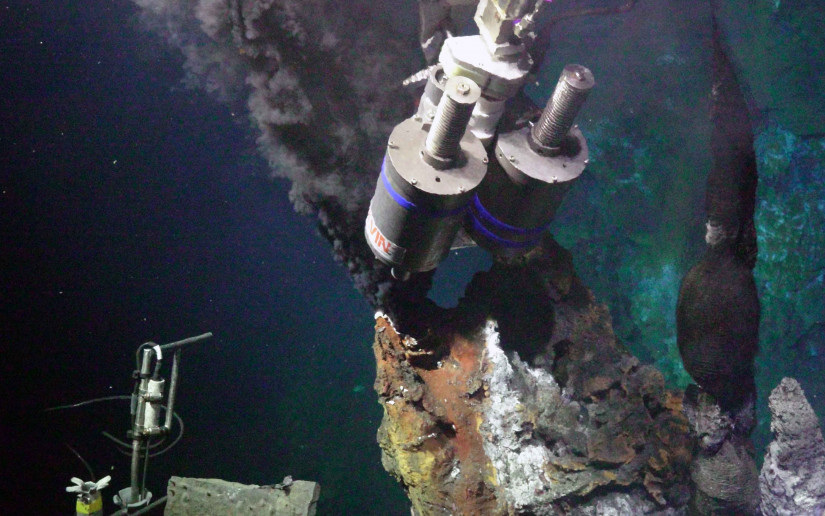