Lauren Ward is a science communicator and alumna of Scripps Institution of Oceanography at UC San Diego. She’s currently working as a video producer for NASA’s Goddard Space Flight Center, covering topics related to the earth and oceans. Prior to this job opportunity, Ward obtained a Master of Advanced Studies degree in Marine Biodiversity and Conservation (MAS MBC) at Scripps in 2015.

We caught up with Ward to learn about her path to science communication, her current dream job at NASA, and her involvement in other platforms to help share Earth’s story with the world.

What led you to pursue a graduate degree at Scripps Oceanography?
My unshakable love for the ocean aside, Scripps offered the opportunity to learn the language of marine science. At the time I was a science writer for National Geographic covering the many adventures of explorers funded by the Society – archeology, exploration, biology, anthropology, and yes, oceanography and marine biology. That’s where I met Explorer-in-Residence and former university professor, Enric Sala. He saw himself writing the obituary of ocean life, and quit academia to become a full-time conservationist. His project Pristine Seas made an impression on me. He paired captivating media with good science to help protect the last wild places on earth. My strongest contribution to conservation was (and still is) communicating its stories. But I wanted to be a better translator of that complex science. So Enric Sala wrote me a letter of recommendation and I started my program at Scripps.

What did you research while a Scripps MAS MBC student?
While at National Geographic, I worked with a Young Explorer from New Orleans who was capturing the oral history of local people post-Hurricane Katrina. Her stories from the city were incredible. When my graduate advisor Kathryn Mengerink offered me the opportunity to do work in that same area, I jumped. I studied the Gulf of Mexico and the complicated relationship between climate change, natural disasters, human extraction, and social inequality. My research was in two parts, studying the fragile ecosystem and one part understanding its effect on the local people and their decision making. 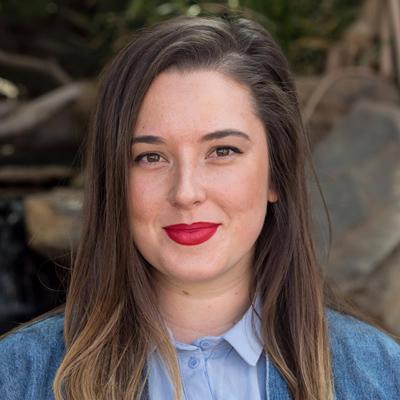 What are you doing now at NASA?
I work as an Earth Science Video Producer at NASA Goddard Space Flight Center in Greenbelt, Md. – a few miles from the border of Washington, D.C. The communications team is parsed into four major themes: Heliophysics (Team Sun), Astrophysics (Team Stars), Planetary (Team Planets), and Earth Science (Team Earth). My “beat” is planet Earth and, relatedly, stories that tie back to ocean systems. I’m also the executive producer of NASA Explorers, a show that follows intrepid scientists and engineers into the field as they search for answers on Earth and in space. This year we are entering our fifth season!

The Smithsonian Institution’s 2020 Earth Optimism Digital Summit was a fantastic way to celebrate Earth Day last month. How did you become involved and what was your role in that?
Wow! What a great experience that was. This year, I was fortunate enough to be one of four hosts for the 2020 Earth Optimism Digital Summit, which was a 21-hour live broadcast of speakers, films and panels featuring changemakers from all over the world. Think of the host’s role as almost like a news anchor’s – throwing to various segments, interviewing guests and providing final thoughts after a panel or film. Before working at NASA, I was a science writer for the Ocean Hall at Smithsonian’s National Museum of Natural History which is how I met the summit organizers nearly four years ago.

What do you love about your job?
Permit me to be sappy for one second here. I obviously loved Earth before I started working at NASA. But in the context of a boundless universe, which is the context in which NASA sees Earth, it is the most perfect oasis we have yet to discover. The other planets in our solar system and beyond are fascinating and it will be so exciting when a human sets foot on one. But I think if we were adrift on any other planet, we’d try to get to Earth as quickly as we could. I get the amazing job of revealing its mysteries and telling a piece of its epic story.

How did your time at Scripps help shape your career or current role?
Going to Scripps gave me a strong education, but equally so, it gave me confidence to ask the right questions when interviewing scientists and engineers. Achieving a degree from Scripps was an extremely validating moment and I still carry that momentum into my work today.

What initially sparked your interest in science?
I don’t think I was ever interested in science per se, more so the stories that the natural world had to tell. It started with visiting the wetlands near my house in Southern California and understanding the life history of animals that were born in eelgrass nurseries. Science still tells a page-turning story, but it's supplemented by rigorous observation and testing. And ultimately, it demystifies our deep human connection to the land and sea, both material and spiritual.

What are some of the challenges or obstacles you’ve overcome?
I’ve been lucky enough to move through my career relatively obstacle-free. In truth, the biggest obstacles I faced were the ones created for myself. When I transitioned from being an international policy wonk to a science writer, I worried that the scientific community wouldn’t think I belonged. Then when I transitioned from being a writer to a video producer, I worried about the same thing. Now I realize that a non-linear career path can actually be an asset to your work.

What advice do you have for current Scripps students?
First of all, if you’re a Scripps student, you’ve already made some great life choices! But don’t lose your focus! Sometimes it’s easy to become myopic about your field of study. As much as you can, try to relate your work back to the bigger picture. Don’t lose sight of what you uniquely bring to your field and lean into that. Perhaps it’s your unconventional approach to solutions, your ability to suss out minute details, your talent connecting seemingly disparate themes, or your ability to coordinate a team. Conservation needs people who think and work in different ways to tackle a challenge from all fronts.