A community of faculty, students, and staff at Scripps Institution of Oceanography at the University of California San Diego was recently recognized for its efforts in equity, diversity, and inclusion (EDI) at a campus-wide ceremony.

The Scripps community was acknowledged for spearheading an effort that led to the hiring of its first-ever diversity initiatives coordinator, Keiara Auzenne, in September 2016. Scripps Director Margaret Leinen presented the award to members of the Scripps community at UC San Diego’s 22nd Annual Equal Opportunity Affirmative Action & Diversity Awards Ceremony.

This recognition program is designed to acknowledge employees, staff, faculty, students, organizational units, departments, and members of the UC San Diego community who have made an outstanding contribution in the areas of EDI on campus.

“I’m recognizing not an individual or an organized group, but a community of faculty, students, and staff who reached out to make possible and to assist in the hire of our first ever equity, diversity, and inclusion coordinator,” said Leinen, vice chancellor for marine sciences at UC San Diego. “The culmination of the Scripps diversity initiatives coordinator hiring is a testament to the commitment that Scripps is taking with EDI efforts in all of our education and research endeavors—an incredibly important achievement.” 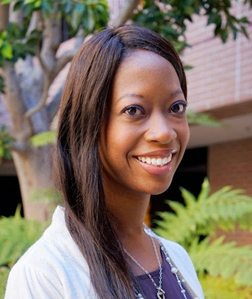 The idea for the diversity-focused position originated with Scripps graduate students, who over multiple years and through various collective efforts—specifically Scripps groups TIDES and GDAWG—led the charge for the development and creation of the position. Various faculty and staff members also helped raise awareness about the need for this position and provided administrative support and guidance throughout the funding and hiring process.

“I was interested in applying for the diversity coordinator position at Scripps because I saw it as an opportunity to make a positive impact,” said Auzenne, who comes to Scripps from the Center for Employment Opportunities in San Diego where she served as the county director.

Auzenne brings a strong professional, academic, and community service background to her new role, in which she is responsible for developing, coordinating, and implementing strategies to establish diversity and inclusion as core values throughout all aspects of Scripps’ activities. She will also work closely with UC San Diego’s Vice Chancellor for Equity, Diversity, and Inclusion to improve diversity planning and program integration between Scripps and UC San Diego.

Over the past few months, Auzenne has held a series of focus groups designed to get input from the Scripps community on EDI priorities. Her next step will be to draft a Strategic EDI Action Plan, which will likely include EDI training programs on core concepts like cross-cultural communication and implicit bias, better highlighting EDI resources and underrepresented individuals at Scripps, development of a community engagement newsletter, and more.

“I believe that education is the foundation of our future,” said Auzenne. “Who has access to quality education and how we mentor and support those individuals matters just as much as what we are trying to teach them, especially when it comes to climate sciences because you need to be able to engage anyone and everyone in order to address the human impact on climate change.”

Leinen said the new position really sets Scripps on a path to ensure that EDI becomes an integral part of the community fabric going forward. She added, “Scripps really will never be the same because of this and we couldn’t be happier.”