A new lecture series is bringing conversations about equity, diversity, and inclusion (EDI) in science to the forefront at Scripps Institution of Oceanography at UC San Diego. Students, faculty, staff, and members of the public are invited to participate in the DEEP Connections (Developing Engagement through Existing Pipeline Connections) lecture series, as well as several other virtual programs offered throughout February in recognition of Black History Month.

DEEP Connections explores the intersections of diversity and science by highlighting the scientific endeavors of traditionally underrepresented and marginalized scholars who are also advocates for advancing EDI in the fields of earth, ocean, and atmospheric sciences. The series came to fruition in late January 2021 thanks to efforts by the Scripps Equity, Diversity & Inclusion team.

“The DEEP Connections lectures were designed to provide an in-depth look at how communities within science, research, and academia can step up to the plate to foster a positive and welcoming climate for all,” said Scripps Director Margaret Leinen. “Diversity of perspectives and expertise are assets, especially when it comes to dealing with issues that are so closely connected with society—whether it’s climate change, overfishing, or the impacts of oceans on human health. We need all hands on deck, and we need all scientists to feel welcome when they get here.” 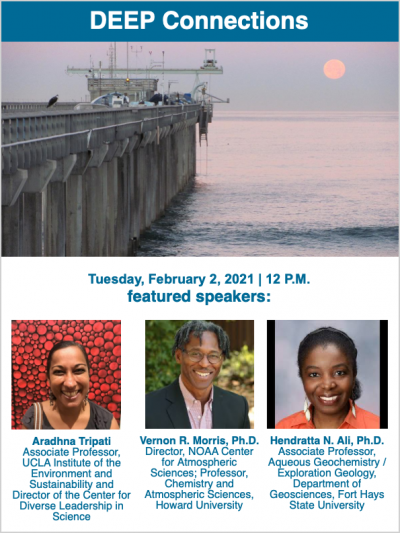 The next DEEP Connections event will take place virtually on Feb. 2 at noon, followed by a Q&A. Featured speakers Aradhna Tripati (UCLA Institute of the Environment and Sustainability; Center for Diverse Leadership in Science), Vernon R. Morris (NOAA Center for Atmospheric Sciences; Howard University), and Hendratta N. Ali (Fort Hays State University) will discuss their scientific and EDI-related work. Those interested in attending can register here.

Other virtual events offered by Scripps in February include a two-part Black History Month seminar, “Excellence and Equity are Not Mutually Exclusive,” sponsored by the Oceans and Atmosphere Section of Scripps and organized by PhD candidate Tashiana Osborne and researcher Art Miller.

“It was important for us to organize this two-part seminar to feature and discuss the current state of affairs and calls to action involving justice, equity, diversity, and inclusion (JEDI) efforts within the department and university. We also wanted to spotlight and develop meaningful collaborations transcending oceans and borders,” said Osborne. “My hope is that, with more hands on deck dedicated to active roles and clear steps necessary to achieve collective JEDI goals, we can raise the standard for ‘excellence’ both internally and internationally.”

“Ocean Corps,” part one of the seminar series, is scheduled Feb. 5 from 11 a.m.–1 p.m. Researchers will discuss their work with the Coastal Ocean Environment Summer School in Ghana (COESSING) and efforts to build a global Ocean Peace Corps. Speakers include Scripps researchers Drew Lucas, Anna Savage, and Osborne, COESSING co-founders Brian Arbic (University of Michigan) and Joseph Ansong (University of Ghana), and other colleagues. Register here.

Additionally, Scripps is hosting an Institutional Seminar, titled “Black Excellence at Scripps,” on Feb. 16 at 1:30 p.m. The seminar will feature alumni and current students and staff speaking about their experiences at Scripps. A virtual timeline of Black contributions to Scripps will also be revealed and discussed. Register here.

These upcoming EDI-focused lectures are part of a multi-pronged approach by Scripps to attract, retain, and support a diverse faculty, staff, and student body with the goal of reflecting California demographics and achieving institutional excellence. The field of geosciences is among the least diverse in science, with only 10 percent of doctoral degrees in geosciences going to recipients of color, and less than 4 percent of tenure-track positions being held by people of color at the country’s top 100 geoscience departments. As a global leader in research, Scripps is dedicated to improving these statistics.

More broadly, Black in Marine Sciences is an organization that aims to change the cultural experience of Black people in marine science. Learn how you can get involved by following #BlackInMarineScience on Twitter and Instagram, and be sure to check out BIMS Bites, a weekly YouTube series featuring Black scientists presenting a five-minute bite into marine science topics.