Marine biologist Dimitri Deheyn, associate researcher at Scripps, is working on a two-fold approach to these micromaterials. He and postdoctoral researcher Sarah-Jeanne Royer are monitoring microfibers around the world to better understand how these fibers enter and spread in the environment, while also partnering with industry to identify possible avenues to limit plastic pollution and develop remediation strategies.

While cotton is a natural fiber, the majority of microfibers are synthetic and many are petroleum-based, making them a form of microplastic. Because of their ability to absorb larger amounts of water and unique chemical binding properties, they can be found in many textiles, including clothing and cleaning cloths, and are defined by their ultrafine nature (thinner than even a strand of silk). These fibers shed into the environment when textiles are washed and through everyday wear, and are becoming a growing concern among scientists and environmentalists.

Deheyn, an expert in biological light, color and toxicology, became interested in microfiber research after finding that these materials fluoresce under imaging conditions used in his lab. Deheyn uses change in color or light produced by organisms as an early indicator of stress (the same way people turn pale when starting to get sick), especially upon exposure to conventional pollutants like trace metals or environmental shifts related to climate change. In recent years Deheyn has noticed an increasing number of glowing fibers in his images.

“When I saw these fibers glowing in fluorescence in my samples, my first reaction was to clean the lenses of my microscope, but I realized that these fibers were actually part of my sample,” said Deheyn.

After Royer’s arrival, Deheyn’s lab has taken a new focus in plastics and their derivatives. Royer worked for four years on this global issue at the University of Hawaii, where she built strong collaborations with scientists, NGOs, and the local community. She specializes in the emissions of greenhouse gases from plastic in the environment, plastic degradation, the fate and pathways of marine debris and the North Pacific Garbage Patch.

NOAA defines microplastics as any plastic particle that is less than five millimeters in length. These minuscule particles result from the breakdown of larger plastic and synthetic materials, and are of increasing concern to environmental and public health officials who worry about the impacts of eating fish and other seafood that have ingested microplastics. However, researchers are still learning about the scope and impact of these particles on ecosystems as well as humans.

Deheyn’s observation of fluorescent pollutants led to new opportunities. He and researchers at the UC San Diego Jacobs School of Engineering have been using fluorescence to develop new technology to detect microplastics filtered out from water samples.

The technique, developed by engineering graduate student Jessica Sandoval, is called the Automated Microplastics Identifier (AMI). The protocol aims to replace manual counting by eye with automation processes that identify the fibers. Researchers first image the filters under UV illumination, so that the plastic fluoresces. Sandoval developed software to quantify the amount of plastic on each filter and to also generate information of features of the plastics using image recognition.

“It is an exciting first step, using automation technologies to assist with the monitoring of this prevalent marine pollutant,” said Sandoval, who began developing this technology as an undergraduate student. “With such technologies, we can more easily process samples from across the globe and generate a better understanding of microplastic distribution.”

This technology has already been used by researchers to analyze water samples from around the world as part of Deheyn’s efforts to understand the global presence of microfibers. So far, he has found that microfibers can be found in samples worldwide, including from above the Arctic Circle. This global monitoring effort has led them to partner with Greenpeace, the Draken Viking Kings ship, the Young Explorers Club, Adventure Canada, and multiple other initiatives, including Seeker Media’s expedition “The Swim” to collect samples in the North Pacific, including the North Pacific Garbage Patch that will be part of their next expedition named “The VORTEX swim.” 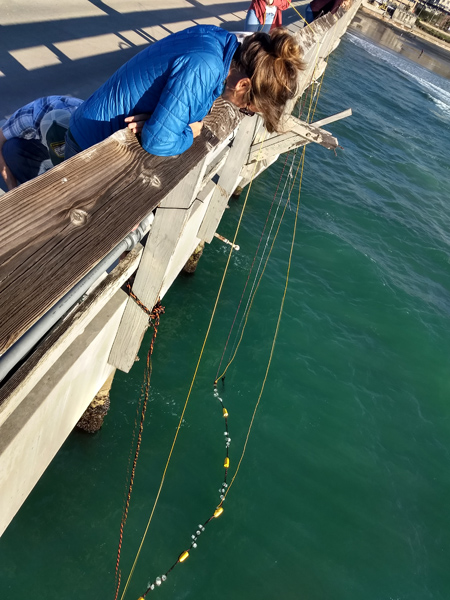 “We eventually want to provide a map of microfiber distribution around the globe, so that people – and most importantly marine resource managers – can better assess the effect of these tiny synthetic materials present in our food,” said Deheyn. “Our hope is that this becomes a global citizen science project, with the help of AMI and the citizen science collaborations that Royer built over the past ten years.”

Aside from measuring these micro-textiles from water, air, and sediment samples, one of the hallmarks of Deheyn and Royer’s work involves analyzing water samples taken from the Scripps Pier over 50 years. These samples, first collected in the 1970s, are analyzed for microfiber concentration in order to determine how quantities of this pollution have changed over time. This research will also show which types of fibers are the least biodegradable, and around what period in the past 50 years this pollution became noticeable.

“It is very exciting to have access to such an amazing collection of water samples that have been collected over the years at Scripps,” said Royer. “This gives us a unique opportunity to go back in time and really see the onset of global textile pollution that is unfortunately so dominant these days.”

The counterpart to their research includes working in parallel avenues of collaboration with industry to provide independent assessment on microfiber research; for example, to understand how fibers and microfibers degrade, and explore new sustainable options. Through the BEST Initiative, a platform founded by Deheyn that facilitates the interaction between industry and academia to provide a space for collaboration, Royer is currently testing degradability of cellulosic fibers relative to synthetic ones. The key here was to acquire raw material fibers created from popular chemical processing that could ultimately affect fiber biodegradability, which has been successfully implemented with fiber producers such as the Lenzing Group.

Royer is testing the biodegradability of both raw-form cellulosic fibers and those that have been further processed – as would occur further down the supply chain – through experiments in the lab but also off the Scripps Pier. There, fiber materials are subject to real marine environmental conditions. The researchers hope to address two fundamental questions: which virgin materials degrade in the marine environment, and which process in the supply chain alters the degradation of textile. To address the second question, the team is working to partner with other companies in the value chain – such as producers of outdoor apparel – for further research.

Deheyn and Royer’s studies follow a history of plastics research at Scripps. From August 2-21 2009, a group of doctoral students and research volunteers from Scripps embarked on an expedition exploring the Pacific Garbage Patch. The Scripps Environmental Accumulation of Plastic Expedition (SEAPLEX) focused on the accumulation of plastic debris and how it affects marine life.

Biological oceanographer Jenni Brandon’s research focused on plastic pollution, primarily the ecology of marine microplastics, the spatial and temporal extent of these microplastics, and better ways to quantify them. Her studies have examined the distribution of microplastics in the California Current and North Pacific Subtropical Gyre, and how these plastics age and degrade over time.

Anela Choy, biological oceanographer and assistant professor at Scripps, has also encountered microplastics in her research. Choy studies food webs in the deep sea, using marine animals dissected in her lab to learn about the movement of carbon throughout the water column. In her dissections, she has found plastics in the stomach contents of fish that live thousands of feet below the surface. Her latest study found that microplastics are common throughout the water column in Monterey Bay, and are being ingested by marine animals.