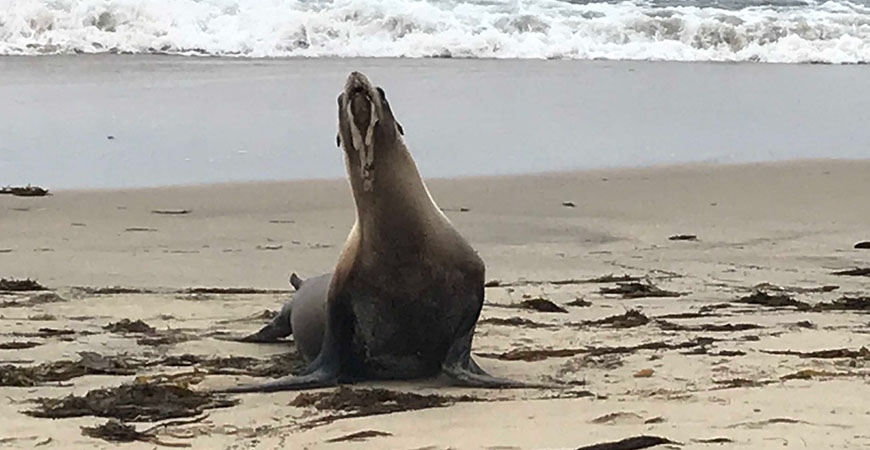 
Researchers from Scripps Institution of Oceanography at the University of California San Diego want to know what causes an oceanic algal bloom to turn deadly.

To find out, researchers are gearing up to hunt for blooms along California’s coast using a suite of technologies that can target and sample ocean microbes and sift through genetic code in real time. All of this is made possible by a new $4.9 million grant from the National Oceanic and Atmospheric Administration (NOAA). The multidimensional effort will build upon recent discoveries about these temperamental microscopic algae under a project funded by NOAA’s Ecology and Oceanography of Harmful Algal Blooms (ECOHAB), a nationally competitive research funding program.

In 2015, the U.S. western coastal economy took a huge hit after the largest toxic algae bloom ever recorded caused massive marine die-offs from central California to the Alaskan peninsula. Entire fishing industries, like the razor clam and Dungeness crab, were temporarily closed and lost millions of dollars.

Scripps Oceanography researchers uncovered the genetic basis of domoic acid production in toxic algal blooms and the findings were published in Science last year. Domoic acid can accumulate in tissues of shellfish and fish.  When consumed by larger mammals, like sea lions or even humans, domoic acid can cause memory loss, seizures, and even death. The toxin is produced by a specific type of phytoplankton (the microscopic plants that support the marine food chain and produce over 50 percent of the earth’s oxygen) known as the diatom Pseudo-nitzschia. But so far, scientists don’t know why some blooms of algae, which occur all the time in every part of the world, suddenly turn deadly.

The underlying cellular and oceanographic factors that cause genes of this diatom to produce the toxin remains an enigma, said the project lead investigator Andrew E. Allen, a microbial oceanographer and genomics researcher at Scripps Oceanography and the J. Craig Venter Institute. But it makes all the difference between healthy and productive algae or a death knell for marine production and industry.

Genomics experts, biological and physical oceanographers and engineers from Scripps Oceanography have teamed up with Monterey Bay Aquarium Research Institute and the Southern California Coastal Water Research Project on the award to deploy a suite of underwater technologies that could help predict when algal blooms will turn toxic.

The geographic scope of the project stretches along the coastal waters from Monterey Bay to Santa Barbara to Del Mar.

Semi-permanent instruments developed at Scripps called Wirewalkers will be deployed in the ocean along that geographic range. Wirewalkers harness the energy of ocean waves to move sensors through the water column, capturing detailed measurements of the physical environment where algal blooms are born, said physical oceanographer Drew Lucas, a project co-investigator and developer of the Wirewalker technology.

“The Wirewalker has the capacity to give information about the physical characteristics of water so we can see what’s changing in the environment to make these blooms happen or more toxic,” said Lucas, who also has a joint appointment at Jacobs School of Engineering at UC San Diego.

The team will set out on a series of month-long sea expeditions in open water to search for the harmful blooms next fall and the following spring, seasons when toxic algal blooms are known to appear.

Monterey Bay Aquarium Research Institute will supply a torpedo-like, long-range autonomous underwater vehicle outfitted with a third-generation environmental sample processor that can be launched from a small ship into algal blooms off the coast of California. Researchers plan to attach sensors developed at NOAA that, while darting among an algal bloom via remote control, suck in ocean water, and preserve it so that the genetic code of the algae can be examined in the laboratory to search for signs of domoic acid production.

“It’s a challenge to track algal blooms as they develop since satellite imagery is not instantly available and doesn’t tell us what is happening below the ocean surface,” said Clarissa Anderson, a biological oceanographer with expertise in modeling and predicting harmful algal blooms as the executive director of the Southern California Coastal Ocean Observing System at Scripps. These underwater robots will help us detect and follow subsurface blooms and better understand the conditions of the deeper ocean when they occur, she said.

“We can actually sample deeper water and detect subtle changes in gene expression that are at the heart of the harmful algal bloom mystery,” said Anderson, also a co-investigator on the grant. “This means we will better understand what causes blooms to form in the first place and ultimately build more accurate forecasts.”

Pinpointing and predicting the cellular toxic triggers have implications beyond California. The most recent toxic red tide event occurred off the Gulf Coast of Florida last year causing months of prolonged marine die-offs and slamming the fishing and tourism industries there.

To multiply, diatoms need large amounts of nitrate, a nutrient found commonly in waters polluted by wastewater. One hypothesis is that water pollution could contribute to toxic algal blooms and that’s why the team will also test near a variety of wastewater discharge hotspots along Orange County in Southern California.

Bradley Moore, a professor of marine biotechnology and biomedicine at Scripps and the Skaggs School of Pharmacy at UC San Diego, hopes the study will uncover a “lag” or a period in which scientists can predict a bloom is about to happen. Moore, who is also a co-investigator on the project,and Allen will conduct laboratory experiments aimed at understanding cellular and physiological triggers for domoic acid production. They will also sequence the genome of Pseudo-nitzschia strains to better understand the diversity and distribution of domoic acid-related genes.

“Today we seem to be much more reactionary to when a toxic event happens,” Moore said. “But when you’ve got a hurricane barreling down, you don’t want to react when it hits you. You want to be prepared a couple of days beforehand.”

This preparation is of interest to NOAA, which hopes to develop improved ecological forecasts of these harmful algal blooms.