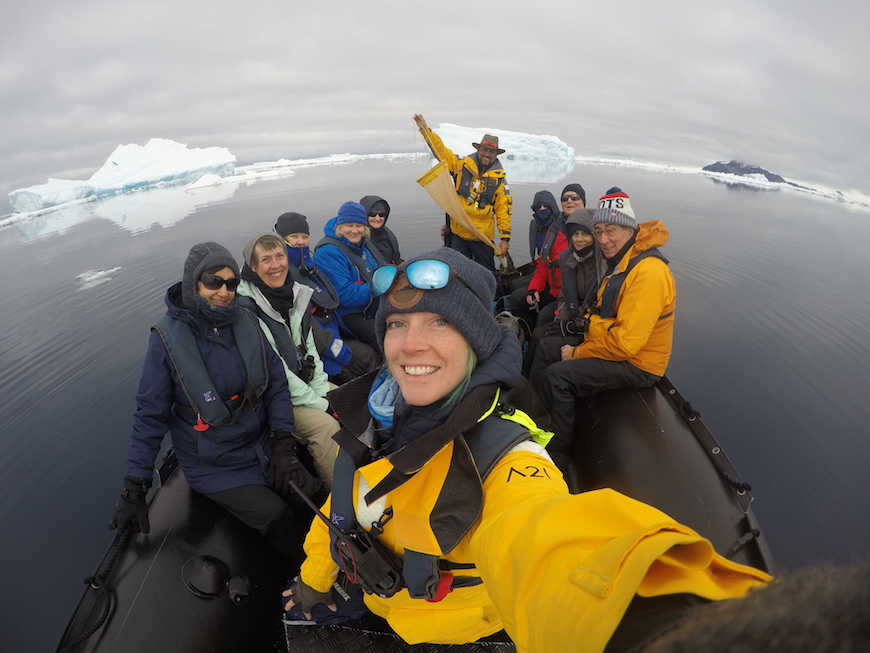 
Allison Cusick is a second-year PhD student at Scripps Institution of Oceanography at the University of California San Diego. She was born and raised in Seattle, Wash. where she lived until moving to San Diego to attend Scripps. Cusick earned a bachelor’s degree from the University of Washington in biology with a minor in earth and space sciences.

She is now studying Arctic and Antarctic phytoplankton ecology in the lab of Maria Vernet, a professor emeritus in the Integrative Oceanography Division. Cusick’s research looks at polar phytoplankton to understand how their population changes through the seasons and how they are affected by fresh water coming from melting glaciers. We caught up with Cusick to find out what drew her to Scripps, why she started researching phytoplankton, and more.

explorations now: Why did you choose to attend Scripps for graduate school?

Allison Cusick: I originally never thought I would pursue a PhD after getting my bachelor of science (BS). I’m the first in my family to go beyond a high school education so I thought getting a BS and entering the working world was a great start. I also wanted to explore what I was truly passionate about before continuing on such an intensive career trajectory. I spent ten years working as a research technician in various fields (neuroscience, immunology, terrestrial field biology) before figuring out oceanography would be my dedicated science career path and lead me to a PhD. I had been working at an institute in Seattle for six and a half  years studying diatom response to ocean acidification and through this work was introduced to the field of oceanography and seagoing expeditions.

I realized to advance to the next level as a scientist, I needed to go for higher education. I first came to Scripps at age 33 as a master of advanced studies (MAS) student in the Marine Biodiversity and Conservation (MBC) program at Scripps thinking I would only spend one year at Scripps and get back into the workforce. The MAS MBC program offered a wider view of what was possible in marine science exposing me to a perspective in policy, economics, and social issues. I partnered with my current advisor, Maria Vernet, and we designed a citizen science program (FjordPhyto) to run with tour ships in Antarctica as broader impact to our research questions. Upon completing my MAS degree, I wanted to keep up the work of that program so Maria and I wrote a grant to the National Science Foundation (NSF) which received funding support and allowed me to come in as a PhD student. I couldn't be more thrilled to stay at Scripps to receive top-quality training and continue pursuing my passions as an oceanographer, even if I am an "older" graduate student being 34 years old at the start.

AC: I am studying the communities of phytoplankton that live along the west Antarctic Peninsula to understand who is there during the season and how the population changes through time (i.e., using molecular tools to look at the diversity of species - also referred to as "metagenomics"), and how they respond to the presence of fresher meltwater coming from glaciers (i.e., can we see a response to the environment at the genetic level - also referred to as "metatranscriptomics").

AC: I’m the first in my family to go beyond a high school education, so discovering which career, let alone which field of science I'm passionate about has been a long journey. I originally became interested in the field of oceanography in 2010. I started a research technician job at the Institute for Systems Biology in Seattle, where I ran lab experiments on diatoms and looked at their genetic response to ocean acidification conditions. At the time it was just a cool job that allowed me to live in the city, and do science on environmentally-focused topics. I had spent my whole undergraduate training in terrestrial biology, so marine research was new to me. In 2013, my boss at the time sent me to Antarctica's Ross Sea for 53 days aboard the research vessel Nathaniel B. Palmer. This was my first experience at sea, and my first (and dream come true) visit to Antarctica. I always thought I wanted to be an astronaut, but upon landing on the icy continent, I decided if I were to ever go to graduate school, it would be to study polar ecosystems as a scientist.

Over the years I have developed an awe and appreciation for phytoplankton and their role in global processes. They support the base of the food web, regulate global carbon cycles, and provide us with over half the oxygen we breathe! They are an excellent study organism that allows me to run experiments in the lab, stay connected to the field of genetics, think about ecology implications, get involved in policy, and travel to the field, which I absolutely love doing. Through the development of the FjordPhyto Citizen Science Project with Vernet during my MAS at Scripps, I've also become familiar with the citizen science world and how to manage a project with the polar tourism industry and polar field guides. 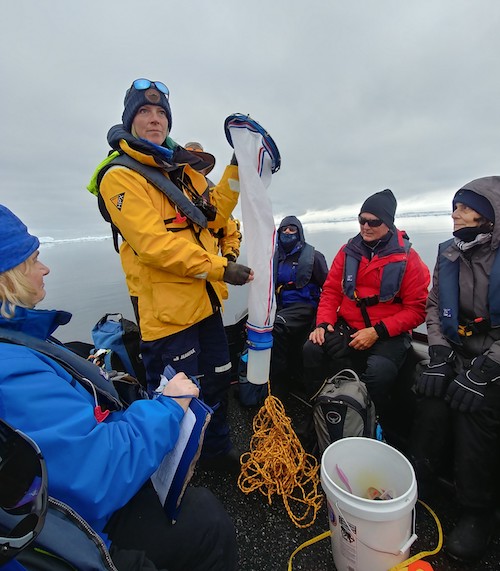 AC: Work work work. Kidding. But it’s work in a fun way! I get to pour my energy into doing something I love (science!) and no day is exactly the same. I'm an early riser so a typical day starts with coffee, taking care of my dog, packing lunch, snarfing down some breakfast then heading off to school (via bike or car) to either the office or my first class of the day. I try to get in to campus around 8 a.m. and start by checking emails. I do not have any lab experiments running yet, so my days are filled with managing the FjordPhyto Citizen Science Project, taking and studying for classes, reading scientific literature, and dreaming up ways I can process and analyze my data collected from the field season in Antarctica. I try to go home to take care of the dog again by 5 p.m., and to exercise, unless there is an event at school or something I need to take care of in the lab. Having the graduate student life is very different from when I was a working technician. Because I experienced the working world for ten years prior to coming to graduate school I was used to having a more balanced life, to be honest. Working an 8-to-5 job allowed me time to have a vibrant social life and many, many hobbies. Being in graduate school, life is totally devoted to studying and research during the day and in the evening, which is fun in its own right, but maintaining work/life balance, eating healthy, and keeping up on my hobbies is a bit trickier.

AC: I get to do science in a place I love and I get to share that work with a huge public audience (travelers).

AC: So many! Many science women from my past work experiences (Kristina Bavik, Carol Thompson, Jennifer Dougherty, my old boss Monica Orellana), my current advisor Maria Vernet, and mentors I have not met in person but feel mentored by through their writing including E.O. Wilson, Sally Ride, Jessica Meir, Hope Jahren, Marie Forleo, and more. Basically, I admire people who go for their dreams and live a full life and that can be anyone from a colleague, someone younger than me, or someone more advanced in their career.

AC: The biggest one: Not feeling guilty when I take a break. Now that the responsibility for progress is on me, I feel really guilty having what a non-graduate student would see as a more healthy work-life balance. Another is finding the time to get everything that needs to be done, or learned, completed. It’s never ending. You have to draw the line somewhere to stay sane! And one more: finances. I'm 35 now, going to be near 40 by the time I finish (gulp). Being on a student salary is tricky for anyone, and especially as someone who once had a taste of the full-employment salaried life for ten years! But despite the challenges, I'm really having a lot of fun during this time of my life and approach it all as an adventure.