Karen Gutierrez is a first-year graduate student majoring in earth sciences at Scripps Institution of Oceanography at the University of California San Diego. As a former Scripps undergraduate, she sought to incorporate her interests in history and anthropology into her research and plans to expand that knowledge in her current master's program. She is advised by Scripps oceanographer Christopher Charles.

Karen Gutierrez: As a California native, I always wanted to attend a UC school. When choosing where to transfer as a prospective geology major, different UCs had a lot of good stuff to offer; there really wasn’t a bad choice. It ultimately came down to the little details: I knew I wanted to be somewhere where I could get involved in research and also be near the ocean. Scripps had both a long history of renowned oceanographic research and an amazing location.

KG: Besides geosciences, I’ve always been interested in history and anthropology. When I took a class on paleoclimatology, I was immediately hooked on the subject. The idea of being able to reconstruct climate information from thousands of years ago from natural climate ‘archives’ seemed almost like magic to me. Plus, paleoclimatology can help provide both a bigger context to past anthropological events, as well as useful analogies for our current climate issues—which were both things that drew me in.

I am working on reconstructing a record of [the climate phenomenon] El Niño and tropical Pacific climate conditions using corals collected from islands located in the center of action for El Niño. These corals have been dated to 4,200 years ago, a timespan that coincides with a drought event concentrated in the Northern subtropics. What’s interesting is that this drought event is thought to be linked to societal events happening in the affected region around the same time. This is where that anthropological, climate-human relationship comes into play.

KG: Most of my time is spent at the Scripps campus rather than the main UC San Diego campus, which resulted in a unique undergraduate experience that carries on as a graduate student. The Scripps campus feels like attending a smaller university, so you feel less overwhelmed or lost in the crowd. Classes are also much smaller than typical UC San Diego lectures so you get to know your classmates and professors as well—which I find nice. I know it’s a popular activity to surf between classes, but I can’t really swim! So I settle for having an iced coffee and taking in the Pacific. 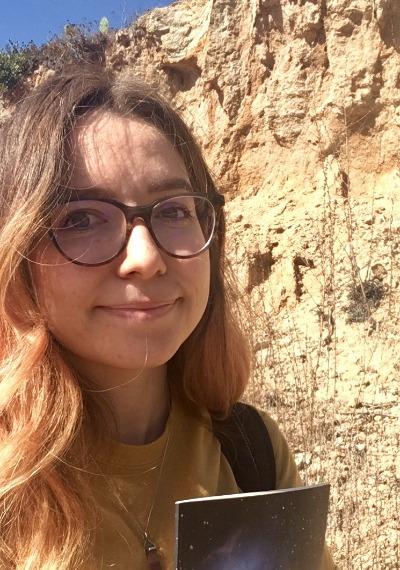 KG: I think that would be the ability to use past climate information to better understand our current world. Paleoclimatology can help bridge the story between the pre-human-inhabited Earth and the one currently dealing with anthropogenic climate change.

KG: I’ve been very lucky to have encountered several mentors throughout my academic journey including Professor Jane Teranes, whose paleoclimatology course set me on the path for exploration of the subject matter. She is an all-around terrific resource for any undergrad who may need just a little sense of direction. Jane directed me to Christopher Charles, who is my current research mentor. While he specializes in paleoceanography, the project he has helped me take on also touches on the relationship between climate and anthropology—a really interesting intersection! Lastly, my former supervisors at the Undocumented Student Services Center on UC San Diego’s main campus, Daniel Alfaro and Christian Gonzalez, have been a much-needed source of guidance and support for the past two years.

KG: As a transfer student, one of the biggest challenges was not having enough time to do everything I wanted to do while an undergrad at Scripps, such as being unable to take certain classes that only happen once a year, or not getting involved in research early on because I didn’t think I had the qualifications for it. For any incoming students: just go for it! Time goes by a lot quicker than you think, so make the best of your time here.

KG: I enjoy learning, either through classwork or research, so I want to continue in academia for the foreseeable future.