Kendall Chancellor is a third-year marine biology PhD student at Scripps Institution of Oceanography at the University of California San Diego. Before attending Scripps, she studied marine and environmental science at Hampton University in Virginia. The Houston, Texas, native now finds herself working in the Sandin Lab under the guidance of marine ecologist Stuart Sandin.

Kendall Chancellor: In 2016, during my sophomore year of undergrad, I did an REU (Research Experience for Undergraduates) with UCLA called the Diversity Project. The program took place in three locations: Los Angeles, where we learned about coral reefs; San Diego, where we completed our scientific diver training; and Mo’orea, French Polynesia, where we got to study coral reefs in the field. While we were in San Diego for our scientific diving training, we took a tour of Scripps. I loved the campus and was amazed by the variety of resources and facilities the school had for students to learn and conduct research. After the tour, I had a strong interest in attending Scripps for graduate school. By completing the Diversity Project and being an undergrad at Hampton University, a Historically Black College, I was eligible to be a part of the UC-HBCU Initiative: an effort to diversify the UCs by offering graduate school funding to HBCU undergraduates, who complete REUs under the initiative, if they attend a UC school to obtain a PhD in STEM. With that opportunity in mind, I applied to be a part of the Sandin Lab at Scripps to continue studying coral reefs. In 2018 when I received my acceptance to attend, I became the first UC-HBCU initiative student at Scripps. 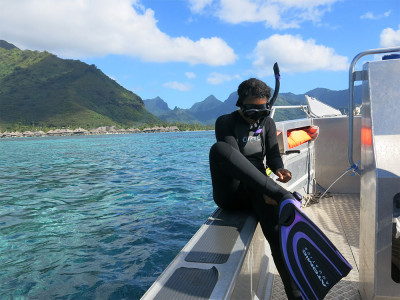 KC: My research focuses on coral bleaching and thermal resistance. In the Sandin Lab, we have an ongoing project called the 100 Island Challenge, a collaborative effort to describe the variation of coral reefs across the globe. As part of the 100 Island Challenge, divers go on expeditions to 100 different islands and use large area imagery to digitally archive the coral benthic community. The thousands of images taken on these expeditions are then turned into 3D models of the coral reefs through VisCore, a custom visualization and analysis software. I utilize the 3D models and VisCore to analyze the bleaching response of coral reefs across 20 uninhabited Pacific islands. I then compare the bleaching response observed to what would be expected based on NOAA's Degree Heating Week (DHW) metric. It is a metric to quantify thermal stress, which concludes that coral bleaching commonly occurs at 4 DHW and coral mortality is likely to occur at 8 DHW. The 20 reefs that make up my project were undergoing thermal stress events with intensities ranging from 4 to 16 DHW during the 100 Island Challenge sampling. We find that multiple reefs in the Phoenix Islands, when experiencing thermal stress of 12 to16 DHW, have a similar bleaching response to reefs in other locations, only experiencing thermal stress closer to 6 DHW. These islands potentially possess a thermal tolerance. We believe thermal history has a significant impact on coral's thermal tolerance, with reefs with a history of frequent intense thermal stress events being more resilient than reefs with a history of few and lesser intense thermal stress events.

en: How did you become interested in science and your field of study?

KC: I have always been interested in the ocean since I was young. My mother’s family is from Florida, and I spent many summers exploring various marine habitats there. I started to consider marine science as a potential career option in high school after a summer program I did at the University of Texas A&M, Galveston. The program focused on ocean careers and marine mammal science. I was then introduced to coral reefs through the Diversity Project at UCLA. After the Diversity Project, I knew that I wanted to study coral reef ecology and pursue a coral reef conservation and restoration career.

KC: With everything currently going on in the world with the pandemic, a typical day is a bit different than usual. But it usually includes analyzing 3D coral reef models at home, Zoom meetings, and going on a walk on the beach or exploring tide pools here in San Diego.

en: What’s the most exciting thing about your work (in the field or in the lab)?

KC: Right now, the most exciting thing about my work is being able to see reefs from all over the world, even if it is just virtually through images and 3D models. It's so interesting to see how reefs vary from place to place. In the future, I am sure the most exciting part about my work will be fieldwork and scuba diving. I love being in the field, but that was put on hold due to the pandemic and some health issues I was having.

KC: I have a handful of role models and mentors who have helped me along the way. Dr. Paul Barber and Dr. Peggy Fong, who are professors at UCLA and the leaders and founders of the Diversity Project, are two major mentors of mine. Their program introduced me to coral reefs and made me see getting a PhD as a possibility. I completed my first research project and was a part of my first publication through that program. They have also been major supporters of mine throughout my academic journey. Another mentor of mine is Dr. Shawn Dash at Hampton University. He was my favorite professor at Hampton, from whom I have learned a lot. He was also my senior thesis advisor and very supportive of my goals of getting into a PhD program. My current advisor, Dr. Stuart Sandin, is an important mentor and role model to me as well. I greatly admire his knowledge and leadership skills. The collaborative efforts he has accomplished through the 100 Island Challenge that connects scientists, local communities, and government officials inspires my career path. He has also been my biggest supporter here at Scripps. Lastly, Ms. Keiara Auzenne, Scripps Director of Diversity Initiatives, is another mentor and role model of mine. The work she does to make minority students feel included at Scripps has been essential to my success here at Scripps. She is also a role model as a successful Black woman, and the work she does to give back to the Black community and add to our progression in academia inspires me.

KC: A major challenge I have faced as a student was during my second year of my PhD; I had an emergency that resulted in debilitating chronic health issues that significantly affected my ability to do school work and conduct research for the past year. I am still overcoming those health issues, but I am confident I will overcome them completely in my third year. I am thankful for how supportive my advisor, Stuart, has been during this time. I have also faced challenges as a Black female student at Scripps. Still, the initiatives and community created by Mrs. Keiara Auzenne and other BIPOC students have been great resources when those challenges arise.

en: What are your plans post-Scripps?

My future plans include finalizing my current research project, which should make up the first chapter of my dissertation, presenting the project at the International Coral Reef Society (ICRS) conference in July, and getting back to scuba diving, so I can go on future 100 Island Challenge expeditions when my health improves enough for me to do so. I also hope to qualify by the end of the year.

You can find Kendall on Instagram at @kendall.chancellor and the 100 Island Challenge at @100islandchallenge.