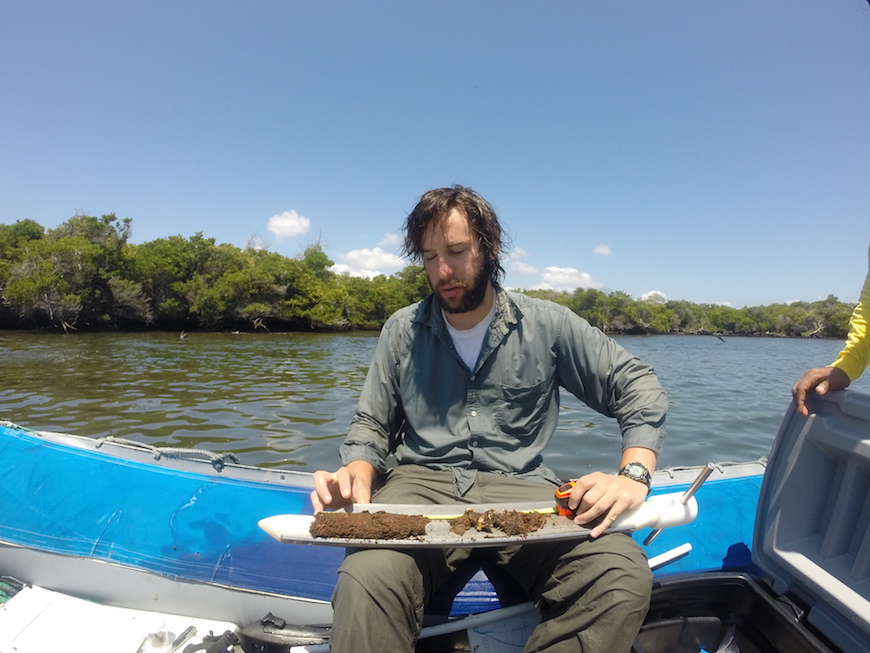 
​Matthew Costa is a sixth-year PhD student at Scripps Institution of Oceanography at the University of California San Diego. He grew up in New York City, specifically in the Queens neighborhood of Belle Harbor on the Rockaway Peninsula; a narrow strip of land between Jamaica Bay to the north and the Atlantic Ocean to the south. Even in a big city, as a child Costa spent as much time as he could in and around the water, shaping his interests that would eventually lead him to pursue studying ecology as a career path. In 2011 he graduated from Princeton University with a bachelor’s degree in ecology and evolutionary biology.

Costa is now studying biological oceanography in the labs of James Leichter, a marine biologist in the Integrative Oceanography Division, and Octavio Aburto-Oropeza, a marine ecologist in the Marine Biology Research Division. He researches intertidal wetlands in the tropics and sub-tropics inhabited by mangroves, trees that thrive in the salty, flooded, and ever-changing coastal zone and, despite these stresses, produce enough food and habitat to support a vibrant community of other organisms. We talked with Costa to see what drew him to Scripps, what led him to study mangroves, and more.

explorations now: Why did you choose to attend Scripps to pursue a PhD?

Matthew Costa: When I decided to pursue a career in marine research and began looking for opportunities for graduate school, I was impressed with the breadth of research facilities and opportunities and the history and reputation of the science done by the extraordinary people that make up this institution. While studying mangrove ecology during my bachelor's, I learned about the exciting work being done by Octavio Aburto-Oropeza on mangrove conservation, which led me to reach out to him to ask about admissions at Scripps. The rest is history!

MC: For my PhD, I am studying the burial of organic matter in mangrove sediments. Mangrove forests are highly productive, rapidly taking up carbon dioxide out of the atmosphere and converting it into organic carbon, i.e., plant matter.

The conversion of carbon dioxide in the atmosphere into organic carbon by plants is a natural process that counteracts the climate-warming burning of fossil fuels by people, particularly when this organic carbon is kept from decomposing and returning to the atmosphere as carbon dioxide again. What is remarkable about mangroves—known as a "blue carbon ecosystem"—is not only that they are highly productive, but that some of the organic matter produced gets trapped and buried in their constantly accumulating sediments. These coastal wetlands tend over time to build sediments with rich deposits of peat, or barely-decomposed dead plant matter, that remain buried underground for millennia. For this reason, the protection of these ecosystems should represent a part of our response to emissions-driven climate change.

I am trying to understand why some mangrove ecosystems store more carbon than others, both to build a basic understanding of the formation and maturation of these interesting ecosystems, and also to evaluate the carbon ecosystem services that they provide to humans. By demonstrating their value to global human well-being, we can help motivate the conservation of these valuable but threatened forests.

MC: I first started studying mangroves in Bermuda for a bachelor's thesis research project. I conducted a field study of the distribution of different mangrove tree species alongside a suite of environmental factors to try to explain how the spatial structure of these communities is maintained. This beautiful and relatively under-studied ecosystem presented an intriguing challenge for a budding ecologist. In the course of this research, I learned how even less is known about the below-ground component of these forests than the above-ground and how severely threatened these ecosystems are worldwide. These insights helped inform the research interests which I have developed at Scripps. 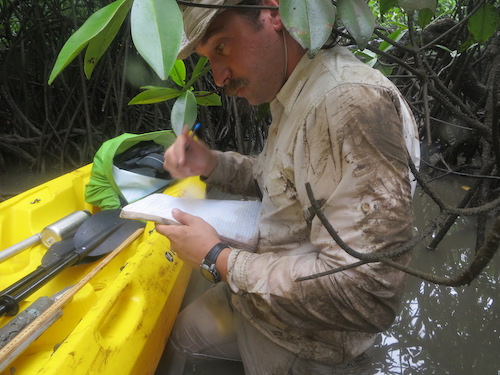 MC: Especially now that I've completed my course requirements, I spend most days processing or analyzing samples in the lab, in meetings with colleagues, working with undergraduate research assistants on their projects, and sitting at my computer analyzing and writing about my data (not to mention the growing onus of e-mail and miscellaneous administrative tasks). When I have time, I engage in various forms of outreach and science communication, such as talking to school groups or blogging/posting/etc. on the internet.

MC: The most fulfilling part of my work is the few weeks a year I get to travel for fieldwork. I have had great opportunities to travel around Mexico and other parts of Latin America to sample the sediments of their mangroves. The adventure and natural beauty of these places is not only fun, but experiencing these places in person also plays a critical role in the process of understanding natural ecosystems. Walking or wading, swimming, or climbing through the mangroves engages the senses, imagination, and full attention of a naturalist, sparking critical observations and making possible new insights and questions about how these ecosystems work.

MC: I have had so much help in getting this far in marine research. From my freshman year at Regis High School, my biology teacher and mentor Diane Walsh encouraged me to ask new questions and she provided the tools to explore them, even when the answers were not sure to pan out. At Princeton, my bachelor's thesis adviser James L. Gould opened so many doors for me: teaching marine biology in Bermuda, encouraging me to return to TA the class and conduct a research project on the mangroves there, and helping me build a strong foundation in building a research project, statistical analysis, and strong scientific writing. Stephen Pacala also provided valuable help in focusing my research interests into a successful graduate project. At Scripps, my co-advisers Leichter and Aburto-Oropeza continue to provide opportunities for expanding my research, capturing the most important impacts of my findings, and thinking about how I can apply my skills and knowledge in the future.

MC: I think many students would agree that one of the greatest challenges of graduate school is time management. We face an ever-growing array of responsibilities, from taking classes to helping teach classes; building an understanding of the literature for the development of your research project; writing reports, grants, and publications; managing collaborations; mentoring earlier-stage students; etc. Figuring out how to get it all done without staying up all night or losing your mind sometimes seems impossible. Fortunately, at Scripps we are in good company, in a community of fellow students among whom is shared not only the drive to achieve but also a spirit of generosity and mutual support.

MC: I hope to continue in academia and am currently looking for postdoctoral research opportunities in the study of coastal wetland ecosystems, the services that they provide to humans, and their sustainable management in a human-dominated world.