Samuel Kekuewa is a fourth-year PhD student majoring in chemical oceanography at Scripps Institution of Oceanography at the University of California San Diego. He grew up in South San Francisco, Calif. Having earned his bachelor's and master's degrees and pursuing his PhD at the same institution, Kekuewa is a self-proclaimed "triple threat." His time at Scripps began while still finishing his undergraduate studies, where he majored in earth science with a minor in marine science. Upon transitioning to his PhD program, he now works in the Scripps Coastal and Open-Ocean Biogeochemistry Lab (SCOOBY) alongside chemical oceanographer Andreas Andersson.

Samuel Kekuewa: As I have worked in my current lab since undergrad, it would be a lie if I didn’t mention that the familiarity of Scripps persuaded me to stay and attend grad school at Scripps. In addition to that, I chose Scripps because there are few other institutions where I can be surrounded by researchers who are the current leaders in their field and that would be willing to meet with me to discuss science. This has only grown more and more obvious the longer I have been at Scripps – through workshops, meetings, and conducting fieldwork I have been able to meet a wide array of other researchers who would always tell me how crazy it is that Professor XYZ is just down the hall from me.

Finally, I chose to attend Scripps because everyone I knew beforehand and have met since has always done their best to help me improve myself both as a scientist and as a person. 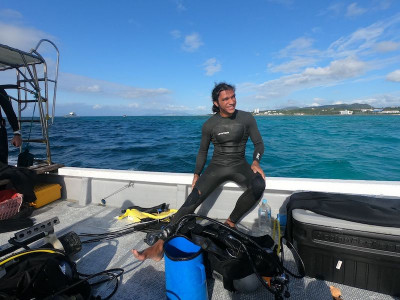 SK: In general, my research focuses on the spatial and temporal variability of seawater carbon chemistry parameters over different scales and ecosystems. For my MS thesis at Scripps I conducted monthly transects off of the Scripps Pier every month from March 2017 to March 2019 and collected seawater samples for analysis in the lab to observe the natural variability of seawater biogeochemical parameters such as temperature, pH, dissolved oxygen, and inorganic nutrients in such a near-shore ecosystem and what could this mean for local habitats and organisms and future ocean acidification projections.

My research has recently transitioned to focus on coral reef ecosystems. As most people know, coral reefs are under threat by human-driven global warming and ocean acidification. However, the extent to which coral reefs are affected by these global phenomena are dependent on smaller-scale local factors that vary from reef to reef. In order to understand how these reefs will change in the future, we need to first understand what is happening to them now and what is driving the seawater biogeochemical variability on top of the reef. To do this we deploy autonomous sensors as well as collect discrete seawater samples for analysis to ideally get a better understanding of what is the variability and what is driving the variability on different spatial and temporal scales.

en: How did you become interested in science and your field of study?

SK: It had to start in high school when I worked a summer job behind a desk prior to enrolling in college and thought to myself, “I cannot work behind a desk. I need to do something that keeps me outside.” Little did I know that that path would lead me to working behind a desk for even longer hours than the typical 9 to 5 at times.

Despite the irony, I was always curious about science and growing up. My dad would take my siblings and I back to his childhood home in Mililani Town, O’ahu, Hawaii. From here it was only a few simple memories of being “chased” (in my imagination most likely) by schools of fish, frequently bumping into honu (sea turtles), and being smashed by one too many waves on the north shore that led high school Sam to choosing earth sciences as his major.

Later on I was drawn to coral reef seawater carbon chemistry because of its multi-disciplinary niche. While it is occasionally difficult to interpret results at times, being able to look at biology, chemistry and physics as a potential explanation for observations is incredibly rewarding.

SK: Currently, it is a lot of staying at home and typing away at a manuscript, trying to figure out the best way to display a figure, or reading a paper that I should have read at least two months prior. Pre-COVID, a typical day would involve an inappropriate amount of coffee (of which I have happily cut down on recently) and then doing the exact same thing as now except with more social interaction of which I must say is a large part of being successful (or at least mentally sane) in grad school. I cannot count the amount of times I hit a wall in the lab and while taking a breather, ran into a colleague who then informed me of their own solution to a very similar dilemma.

en: What’s the most exciting thing about your work (in the field or in the lab)?

SK: Obviously in the lab, operating multiple machines at once and listening to all the switches and clicks operating on time is music to my ears! Jokes aside, the most exciting thing about my work would hands down be my fieldwork experience. This is because fieldwork for me includes going out on 17- to 50-foot boats to collect seawater samples and deploy autonomous instruments via SCUBA (generally in warm water). Furthermore, I have been exceptionally fortunate to be able to work alongside my colleagues both locally here in La Jolla and internationally in Taiwan and Japan and have had experiences that past versions of myself would not have dreamt of. What helps me the most with working behind a desk for so many hours a day is the tangible feeling of knowing where your data is coming from and what it may translate to. Additionally, I find it hard to say that diving for work is not at least a little bit exciting.

SK: Tons. This question is all dependent on your own definition of what a mentor is. To me, a mentor/role model is someone who assisted you and has had an influence on you as both either a scientist or as a person. So in this regard I have had hundreds of mentors. To name a few: Kimberly Leikam, Andreas Andersson, Alyssa Griffin, Travis Courtney, Tyler Cyronak, Ariel Pezner, Max Rintoul, Wiley Wolfe, Kelli Mullane, Alaina Smith, Zach Skelton, Richard Walsh, Brett Pickering, Christian McDonald, Jim Leichter, Zach Quinlan, Allison Ho, and Keiara Auzenne. Through some way shape or form, each of these amazing human beings, amongst many others, have motivated me to always strive for me to be a better version of myself.

SK: Three challenges I often come across are: (A) maintaining the proper amount of work-life balance, (B) writing, and (C) understanding that you cannot compare people’s different experiences and accomplishments without understanding what each person has gone through in advance to get to where they are.

In the case of (A): this is something I feel like I will always struggle with and is exceptionally difficult in grad school due to competition (with self or others). I am fortunate enough to have had mentors that pushed me to take time off and return with a new outlook and improved mental sanity. In comparison (B) is pretty self-explanatory, writing is not my strong suit. However, I know that and my advisor knows that – so we will continue to make improvements and remember that everyone has their own strengths and weaknesses. Finally, (C) comparing your own progress to someone else is something that I feel like discourages a lot of students and people in general. I am fortunate enough to be able to dissociate myself pretty easily (which sounds worrying after rereading this). My only tip for other students is to remember that as an upcoming scientist our goals are not to become carbon copies of someone else and only see the differences from a negative perspective. Instead we need to see the differences from positive lighting and show how our own experiences shaped and molded ourselves into individuals who can forge our own paths.

en: What are your plans post-Scripps?

SK: At the moment I do not have a clue. Ideally I would obtain a postdoctoral fellowship under Dr. Travis Courtney and acquire more tools under my belt. Ultimately, despite where I do end up I would be happy just knowing that as a multiracial person I have the ability to help inform other individuals of what can be achieved.

Check out some of Sam’s amazing adventures on his Instagram @kekuewasam and the work he and his lab have done on Twitter @scoobyresearch and Facebook @anderssonoceanresearch.