Sawyer Brand is an undergraduate student studying oceanic and atmospheric sciences at Scripps Institution of Oceanography at the University of California San Diego. As a member of the Southern Ocean Carbon and Climate Observations and Modeling Group (SOCCOM), Sawyer is always hands-on with testing ocean technology. She is advised by oceanographer Lynne Talley.

Sawyer Brand: I started out wanting to work in renewable energy as an engineer. After working as an engineering intern for more than a year, however, I realized it wasn’t for me.

When I was an incoming UC San Diego freshman, there was a presentation Jane Teranes gave on Triton Day where she mentioned there was going to be a new major in oceanic and atmospheric sciences. Therefore, I took SIO 60 (an introductory oceanic and atmospheric science class) to test the waters and boarded a one-day cruise on the R/V Robert Gordon Sproul at the end of the quarter—and that was it! I found myself at the beginning of a new career.

SB: My current research paper is on exploring lateral stirring of deep-water masses in the Argentine Basin area—which is a part of the larger-scale South Atlantic Meridional Overturning Circulation and is prompted by anomalously low dissolved oxygen profiles recorded by local Argo floats. I am using Biogeochemical (BCG) Argo floats to conduct this research; the floats are part of the array deployed by SOCCOM.

This all started because I currently work as a research assistant to Lynne Talley, the head of observations for SOCCOM. I was working for roughly six months under her until we decided to explore some of the BGC Argo data as a possible research paper topic. Since then, it has continued to grow into the paper I am currently writing.

SB: At the moment everything is a little strange because of the quarantine. Before the world turned upside down, I would get to Scripps at about 8 a.m. and work in my office in between classes. These days, however, it is harder to stick to a schedule. I try to be at my desk at home at 8 a.m. to work on some of the SOCCOM cruise reports for a few hours before my online classes begin. At the end of the day, I also try to put at least an hour (ideally more) into my research.

As an undergrad, you have to find moments to work on your research, which can be hard to do with everything else going on. I think it’s really worth it though—especially if you want to keep researching in that field. Even in the most interesting classes, there are moments during the quarter where everything is all about studying—which can cause the material to get pretty dry. Researching keeps you motivated and excited!

SB: The Argo floats. Despite the COVID situation, the floats are still in the ocean, and we’re still receiving data. That is the most exciting part: you can continually find new things to think about. Not very long before I presented my project at the Ocean Sciences Meeting in San Diego, one of the SOCCOM floats recorded two of the type of anomalous profiles we’ve been looking at! Before then, that particular float hadn’t recorded any. We were all really excited about it and it brightened up the day, making the project more exciting and grounded at the same time. 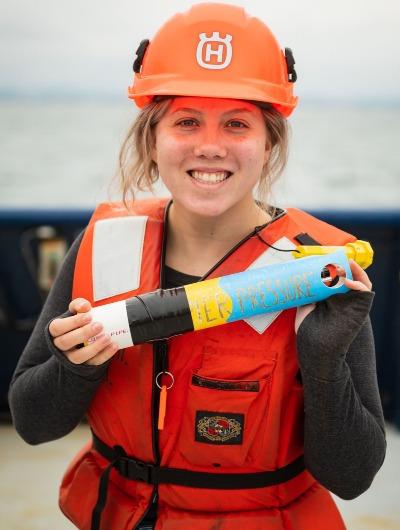 SB: There are so many mentors who have helped me get to this point. I can’t stress enough how much small gestures of help and interest can make someone’s career; it really does take a village to raise an undergrad! It was suggested to me in an offhand comment to apply to SOCCOM and now I’ve been there for almost two years, learning more than I could have ever believed. Random moments like that make all the difference. I do have some very special mentors. My boss, Lynne Talley, has been wonderfully patient with me and teaches me every day to be a better scientist. Professor Janet Becker helped me as a mentor figure for almost a year now. Furthermore, the entire Scripps community has been so supportive—from other undergraduates to postdocs—and of course our professors, starting with the first oceanography professor I ever had, Andrew Lucas.

SB: I have a really difficult time with imposter syndrome. I think it’s far more common than one would think.  Many, many of my friends suffer under the same idea that they don’t deserve what they’ve achieved. I struggle with it every day whenever I don’t go as quickly as I would like with my research, or I get distracted for a moment. Sometimes it becomes difficult to spend time relaxing because I feel like I should be working.

I have several close friends at Scripps who are incredibly smart and will do amazing things in their future, and they feel the same way. The most successful undergraduate I have ever met still acts like nothing he has done was because of his work ethic and dedication.

I don’t think there is any advice I can give to any incoming students that will help them with the same feeling other than reassuring them that so many people feel the same way (especially those who seem so confident and relaxed) and that you can reach out to people to check in and see if you really need to do something differently or better. If they disagree, believe them.

en: What are your plans, post-Scripps?

SB: I’m definitely going to pursue a PhD! It’s hard to say at the moment where I will apply—every time I look at a new university there is someone researching something spectacular that I want to be a part of, so I’ll go wherever the wind takes me.

Curator of the Pelagic Invertebrate Collection at Scripps Oceanography...