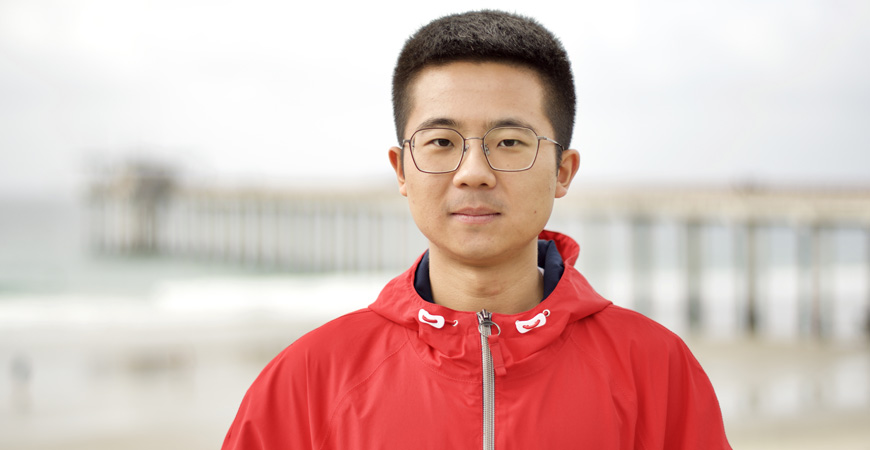 Weiguang (Roger) Wu is a fourth-year undergraduate student majoring in oceanic and atmospheric sciences at Scripps Institution of Oceanography at the University of California San Diego. Wu’s field of study is physical oceanography and he is being advised by Bia Villas Boas and Sarah Gille.

Roger Wu: My interest in oceanography was sparked by the NASA animation Perpetual Ocean, which showed a swirling display of surface currents that revealed a turbulent ocean; I had never seen one before. It was so beautiful! That made me decide to study the ocean in the name of art. Luckily, in the winter quarter of my first year, the new undergraduate major in Oceanic and Atmospheric Sciences opened up at Scripps and I switched into it. I couldn’t miss such a good opportunity to learn about the oceans.

en: What are you researching?

RW: I'd like to learn the physics of the turbulent ocean. My first project was to investigate the role of strong winds off the California coast in driving  changes in sea surface temperature (SST). We established an index to define wind events from buoy measurements, analyzed the correlation between wind speed and SST, and found a consistent air-sea coupling effect.

My interest in upper-ocean dynamics drew my attention to the upcoming Surface Water and Ocean Topography (SWOT) satellite mission, which will measure sea surface height at higher resolution with an expectation to capture submesoscale- (scales smaller than 100 kilometers [62 miles]) ocean eddies and fronts – all of which play a key role in affecting the climate system. The vertical motion induced by these smaller-scale ocean features can transport heat and carbon effectively between the surface and interior ocean.

Some previous studies indicate the importance of submesoscale-induced vertical transport in controlling nutrient distribution, upper-ocean biogeochemistry, and global CO2 uptake. But it’s unclear whether SWOT measurements can reveal the vertical transport at submesoscales. By using existing observations and numerical models, we are interested in characterizing different ocean processes at smaller-scales to better interpret SWOT measurements.

en: What’s life like as an undergraduate student? Describe a typical day.

RW: I am grateful to have an office at Nierenberg Hall as an undergraduate. After classes on main campus in the morning, I take the shuttle to Scripps, drop by Caroline’s Seaside Café for lunch, and come back to my office. By the way, the tuna melt there is my favorite dish! There are biweekly SWOT group meetings on Mondays, and I usually go to the CASPO (Climate, Atmospheric Sciences, and Physical Oceanography) seminar on Wednesdays. Otherwise, most of my time in the afternoon is spent on coding. Watching the sunset at the end of the day is the best reward at Scripps! 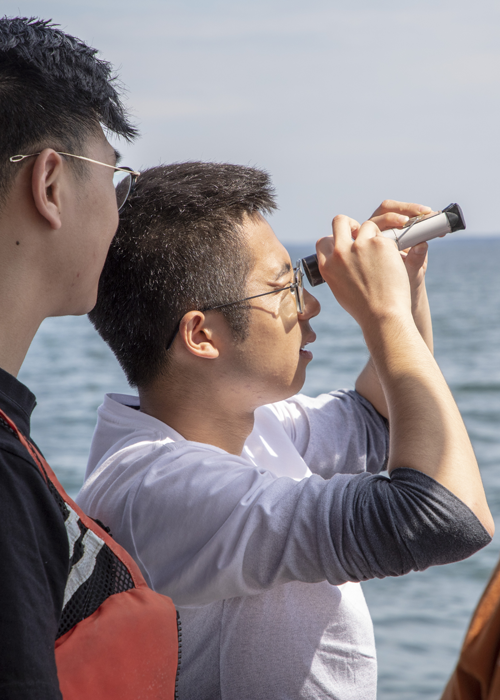 RW: The most exciting part of my work is visualizing data. I like the way that oceanographers plot their data. I think a beautiful visualization of research results can not only catch the attention of audiences through an aesthetic sense but also convey the scientific ideas behind it effectively. Through novel data visualization tools, I hope one day to make the plots like Perpetual Ocean, and communicate my research in an attractive and understandable way.

RW: There are many people who helped me along the way in research. I was lucky enough to meet my advisors Bia Villas Boas and Sarah Gille. As a freshman, I was exposed to physical oceanography for the first time during Sarah’s lectures. My first research project was set from a conversation after class, where Sarah pointed out to me the phenomena of expansion fan winds along the California coast. Expansion fan winds events are the strong sea-surface wind events along the California coast that happen in spring and summer.

I came to research without any programming background, and it’s Bia who taught me how to use Python from scratch. I can remember countless times when we sat together to debug the codes line by line. Both Bia and Sarah helped me a lot in planning an approach, providing resources, and advising my work. It’s hard to imagine what I would do without their support. I also want to thank Rick Salmon, Ian Eisenman, and Janet Becker from whom I learned how to use math and physics to describe the motion of seawater in the classes of waves and geophysical fluid dynamics, which created a solid foundation to address the research problems.

en: What are some of the challenges you face as an undergraduate student?

RW: I think one of the greatest challenges for undergraduates is time management –specifically, how to balance the time between coursework and research. Building the toolbox for research requires a lot of effort. I struggled a lot on how to spare enough time for research in the middle of lectures, homework, and exams. I am still learning how to use my time more efficiently!