Six researchers at UC San Diego’s Scripps Institution of Oceanography will be honored by the American Geophysical Union (AGU) as part of its 2022 awards program, which includes section awardees, named lecturers, and elected fellows.

Scripps Oceanography’s Carlene Burton, Daniel Cayan, Catherine Constable, Wenyuan Fan, and Vashan Wright­ are among those recognized with section awards in 2022. The section awards are bestowed upon individuals for meritorious work or service toward the advancement and promotion of discovery and solution science. Scripps geophysicist Gabi Laske is among 54 individuals elected to the 2022 Class of AGU Fellows, a recognition awarded to researchers for remarkable innovation and sustained scientific impact.

AGU is a nonprofit organization that promotes discovery in Earth and space science for the benefit of humanity, and it annually recognizes a select number of individuals as part of its honors and recognition program. 2022 AGU award recipients will be formally recognized during the AGU Fall Meeting, which takes place Dec. 12-16, 2022 in Chicago, Ill. and online everywhere. Read on for more information on each award. 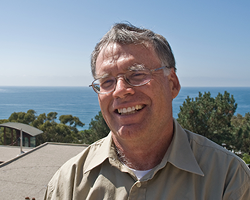 Dan Cayan, a Scripps research meteorologist, was selected by AGU’s Global Environmental Change Section to present the Tyndall History of Global Environmental Change Lecture. This lecture recognizes outstanding contributions to our understanding of global environmental change. Cayan’s research aims to understand climate variability and changes over western North America, with an emphasis on California. His research interests concern impacts of climate changes on water resources and other sectors. Cayan has been a leader in providing climate change assessments for the state of California and co-leads the California Nevada Applications Program, or CNAP, a NOAA RISA team whose aim is to improve climate information and forecasts for decision makers in California and Nevada. 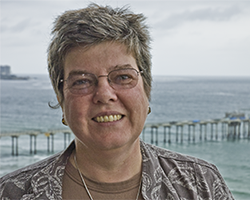 Catherine Constable, a Scripps professor and geophysicist, was selected by AGU’s Geomagnetism, Paleomagnetism and Electromagnetism Section to deliver the Edward Bullard Lecture. She was selected for making significant contributions in the field of geomagnetism, paleomagnetism, or electromagnetism. Constable’s research is concerned with Earth’s magnetic field. She uses measurements of the remanent magnetism in rocks and human-made artifacts around the globe to map field variations in both time and space over century to million year time scales and link them to activity of the geodynamo that produces Earth’s magnetic field in its liquid outer core.

Scripps assistant professor Wenyuan Fan will receive the Keiiti Aki Early Career Award. Bestowed annually by AGU’s Seismology Section, this award honors outstanding early-career seismologists for their scientific accomplishments in the field of seismology. Fan is an observational seismologist who uses seismic records collected both onshore and offshore to study the earth and seismic sources. His research is focused on earthquake rupture propagation, earthquake interaction and triggering processes, and the mechanisms of environmental seismic sources such as landslides and glacial quakes. Learn more about Fan's research in this Deep Dive interview. 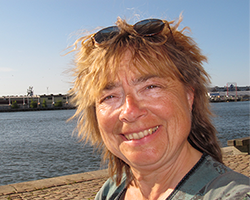 Gabi Laske, a professor of geophysics at Scripps Oceanography’s Cecil H. and Ida M. Green Institute of Geophysics and Planetary Physics (IGPP), has been elected to AGU’s 2022 Class of Fellows. This prestigious honor is given to individuals who have made outstanding achievements and contributions to Earth and space science. According to AGU, fellows embody the organization’s values by fostering equity, integrity, diversity, and open science; by mentoring; through public engagement; and in their communications. Since 1962, less than one tenth of one percent of AGU members have been selected to receive this honor each year. Laske’s research focuses on the imaging of Earth’s interior using earthquake data in a field known as seismic tomography. Her studies are primarily based on seismic surface waves that illuminate the top 200 kilometers (124 miles) of Earth’s structure. Her sea-going research around Hawaii pioneered tomography of the Hawaiian mantle plume through the use of broadband ocean bottom seismometers.

AGU’s Science and Society Section selected the program Unlearning Racism in Geoscience (URGE) and a team of researchers, including Scripps Assistant Professor Vashan Wright and Scripps Research Data Analyst Carlene Burton, for its Science and Society Team Award. This award recognizes a team who employs collaborative models of scientific research, demonstrates equitable distribution of the outputs and impacts of research, and elevates efforts to produce and translate scientific knowledge to serve society. Wright and Burton are among seven individuals from several institutions recognized for their work on URGE, a program founded by Wright to deepen the geoscience community’s knowledge of the effects of racism on the participation and retention of people of color in the discipline. URGE also aims to help geoscientists develop, implement, and assess anti-racist policies and resources in their workplaces.