A team of researchers at the University of California San Diego describe in a study released Feb. 11 the successful use of an analysis tool that employs artificial intelligence to rapidly identify chemical compounds, including ones with potential benefit as cancer drugs or antibiotics.

The SMART (Small Molecule Accurate Recognition Technology) artificial intelligence tool was introduced in 2017, but researchers have since advanced their capabilities, said William Gerwick, a joint professor at the Center for Marine Biotechnology and Biomedicine (CMBB) at Scripps Oceanography, and the Skaggs School of Pharmacy and Pharmaceutical Sciences at UC San Diego. Now the second generation of these artificial intelligence tools is cutting short the once-laborious task of identifying compounds found in nature, according to the study that appears in the Journal of the American Chemical Society.

Critically, this new tool could only be developed by the collaborative efforts of three UCSD laboratories, Gerwick along with Gary Cottrell of UC San Diego’s Computer Science and Engineering Department and Pieter Dorrestein of the Skaggs School of Pharmacy. 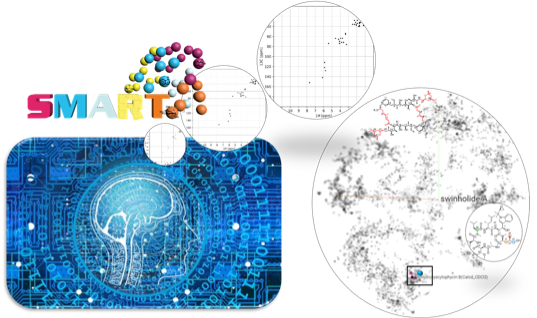 “It is a unique aspect of UC San Diego that labs from different parts of campus come together to collaborate and create novel solutions and tools for science and society” said Gerwick.

The team obtained funding for this collaborative effort from the National Institutes of Health and the Gordon and Betty Moore Foundation.

“It can accelerate analyses that were taking weeks or months to mere seconds,” Gerwick said, “saving both time and money.”

The authors note that bringing drugs to market costs an average of $2 billion, takes an average of 13 to 15 years, and has a success rate of only 12 percent. SMART uses machine learning, a type of artificial intelligence, to recognize chemical structures by comparing against a trained library of more than 60,000 structures and thus more quickly identify them.

But SMART 2.0 is not limited to drug discovery, according to Gerwick. It can be used by toxicologists or other researchers who need to understand the chemical nature not just of compounds but of mixtures of chemicals that come from different sources. It can also be the basis for repurposing chemical compounds that have known benefits, or getting clues as to the biological properties of newly discovered natural products. Additionally, biologists studying chemical substances that mediate interactions between species, such as in symbioses, can rapidly characterize these with the SMART tool, even though they are not trained in organic structure analysis.

“It will accelerate drug discovery as well as any aspect of organic chemistry where the nature of the chemical compound is unknown,” said Gerwick. “It’s already having a revolutionary impact on how people characterize molecules.”

Gerwick is one of several researchers at Scripps’ CMBB who look for natural products found in marine environments that have potential therapeutic properties. The center has identified several such compounds that are now being tested in clinical trials as anticancer drugs or antibiotics.

In this study, Gerwick and co-authors describe how they used SMART 2.0 to characterize a chemically complex natural product produced by a tropical cyanobacterium. They separated the complex mixture into components and each component was then tested for its toxicity to lung cancer cells. Using SMART 2.0, the most effective of those components was classified in 8 seconds, and then further studies to completely describe the structure were greatly accelerated. This new compound is under continuing studies for its anticancer and other potentially useful properties.

SMART 2.0 technology is available to academic users through the website smart.ucsd.edu/classic.