Summer Broke Arctic Temperature Records. Here's What Scripps Researchers Who Lived It Had to Say.

We’ve all seen the headlines: this July was the hottest month on record for the planet, according to the National Oceanic Atmospheric Administration.

Sea ice in the Arctic and Antarctic shrank to record lows. This summer major news outlets like The Washington Post, The New York Times and The Guardian were riddled with warnings of the warming planet, once again throwing the Arctic into a poster child role for the “climate apocalypse.”

A handful of oceanographers from Scripps Institution of Oceanography at UC San Diego just returned from the (mostly) frozen North and we asked for their impressions about the supposed sweltering summer in some of the highest latitudes. Yes, they noted the heat during the trip. Some wore fewer layers while dropping instruments into glacial fjords; some more frequently wiped beading sweat from their foreheads.

Overall, the scientists gave a measured response. The planet is clearly warming and humans are causing it, the scientists agreed, but the Arctic is one of the most dynamic and fickle places to study.

The Arctic is a place where ocean currents originating in the warm Gulf of Mexico and chilly air currents from the snow and ice covered regions converge, swirling and mixing as they bump against the continents. It's a reason the region is what scientists call “highly variable," meaning constantly changing.

Compared to the tropics which experience reliably warm air and ocean temperatures, a small change in any individual factor in Arctic climate can cause unpredictable ripple effects. If the two regions were anthropomorphized, the Arctic would react like a moody toddler to small changes in climate while the tropics could mediate its temper like an experienced parent.

In the scientific world, researchers caution blowing short-term Arctic weather events—even a record-breaking July—out of proportion and beseech the public for patience as they compile decades of measurements to understand how extreme events contribute to long-term trends. 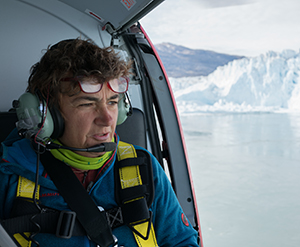 Straneo returned Aug. 7 from the fjord in southern Greenland she has studied for a decade. A cautious climate change communicator, Straneo said she needs another decade’s worth of data to understand what is driving ice loss on one of Greenland’s largest glaciers.

“The truth is, while we were there, I didn’t feel like it was an anomalous year in any way,” Straneo said of the warm summer.

Scientists have taken temperature measurements in Greenland for more than 100 years, but Straneo is after a totally new kind of data. She’s extracting information about the complex system of melting inside and underneath a glacier as it interacts with the ocean by mooring instruments on the Arctic ocean floor and firing remote sensor guns from a hovering helicopter.

“We can measure how much ice is lost from a glacier and ice sheet, but why it’s happening, the drivers, are harder to understand,” Straneo said.

What’s more, there’s no globally agreed-upon plan to coordinate all of this research over the long term, something Straneo said she’s been pushing for years. She co-authored a paper published this spring in the journal Frontiers in Marine Science laying out the case for an international Greenland ice and ocean observation system.

The push for more research in the Arctic is urgent and real. But what concerns Straneo more is Greenland’s ice melt becoming “fashionable” in mass media.

“I’m a bit frustrated because I think the media has decided the way we’re going to document this is through drama,” Straneo said. “The truth is, Greenland will keep losing mass and it’ll happen over hundreds of years. We can’t keep having a ‘scoop’ every year. The risk there is that the public becomes desensitized to it.”

Greenland may very well go through a cooling phase, which can flip in just a decade or so. For instance, NASA’s Global Climate Change center reported in March that the Jakobshaven Glacier, considered Greenland’s fastest-thinning and flowing, began to slow its retreat. Researchers attributed this to the arrival of a cooler ocean current interacting with the temperamental region, again a product of that temperamental toddler that is the Arctic.

Not all Greenlanders agree on what melting means for the future, Straneo said.  Roughly 80 percent of the landmass is covered in ice and global warming could expose more land for mining, tourism and oil and gas exploration.

But for Inuit communities, global warming is causing unpredictable sea ice and thus less-predictable hunting patterns of the animals they rely upon. And many Inuit settlements coexist with glaciers that flow into the ocean, like the one Straneo studies. That marriage of fresh glacial and salty ocean water generates a highly-productive ecosystem in the water column.

“If the glacier changes and retreats on land, that’s a problem,” Straneo said. “So there are very different responses (about the warming) in Greenland depending on who you ask.” 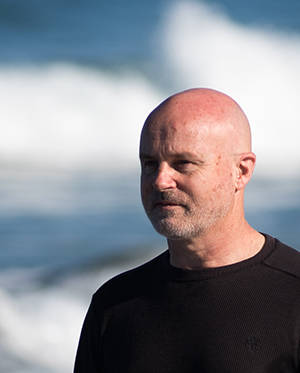 Deane just returned from separate a 40-day trip to the Arctic coast of Norway in August, the fifth visit in seven years of research in the area. He’s working on a new instrument that measures the sound of melting ice that could make it easier and cheaper to study the dynamics of glaciers that interact with the ocean.

“Every time I go up there the glaciers are noticeably receding more,” he said. That’s evidence of a climate shift, said Deane. In Svalbard, the glacier-capped archipelago Deane studies, it’s obvious from photos taken by satellite that these glaciers have receded hundreds of meters. But photos tell scientists nothing about the volume of ice lost or the speed.

There are seven meters of sea-level rise locked up in the ice caps. “That’s a global catastrophe,” Deane said. “It’s going. It’s simply a question of how long it’s going to take, which is what I’m trying to help figure out.” 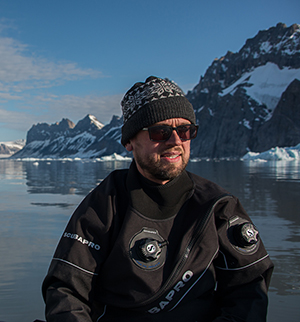 Glowacki travelled alongside Deane for the 40-day journey, bringing his expertise on glacial calving or incidents when building-sized or bigger chunks of ice break from the glacial wall and fall into the ocean. He’s partially funded by the Polish government, the nation that hosted COP24, the most recent installment of the international climate negotiations held under the auspices of the United Nations.

Glowacki said over his six consecutive years visiting the region, he’s noticed summers bring more rain and more sweat to his forehead. He’s noticed changing conditions in his home country, too, though Poland doesn’t share a place in the Arctic circle with Svalbard. He tries to communicate climate change with his countrymen and women by touching upon their experience and how they remember Poland 20 years ago.

“People don’t like graphs… so I try to talk about their childhood at Christmas Eve when you used to see all that snow,” Glowacki said. “It’s sometimes hard to find a clear connection between the research that we’re doing and the message we want to deliver to the people.”

It’s hard to fight people’s perceptions of a place, like snowy Poland or the frozen Arctic, with data. Even in Svalbard, when he’s Skyping with friends, Glowack said, “They’re always shocked when I am sweating.”

Despite the hot Arctic July, the seas were still -1â„ƒ (30â„‰) or less when the geophysical oceanographer made his dives to place underwater microphones for Deane’s network of acoustic glacial melt instruments.

The hydrophones capture high-pitch frequencies when tiny air bubbles in glacial ice pop underwater and low-frequency waves created by larger calving chunks of ice dropping into the ocean. Measuring glacial melt with sound could yield important results, Glowacki said. Calving is typically measured by observing photos taken from a satellite, but those pictures are usually transmitted only every few days.

“You can have multiple building-sized icebergs break off in a few hours,” Glowacki said. “So we’re losing all of that important information.”

It’s a risky business battling near-freezing waters. Divers doing this work can barely see their hand in front of their face in Hornsund Fjord, Svalbard. That’s because glacial ice is constantly moving, dragging rock and silt from land into the ocean seeding huge plumes of sediment. Dive footage from Glowacki shows his partner trying to gingerly work on an instrument in nearly black seas with stony sand blurring his view. As glaciers continue to melt at a faster rate, these conditions may only get worse.

Still, he’s noticed more classic signs of climate change in his yearly trips to the Arctic. It was not uncommon for researchers at Svalbard to count hundreds of polar bears per season. Now, they are few and if spotted, likely starving.

“We have to be careful not to overestimate. It’s not like everything is caused by climate change,” Glowacki said.

But he understands and appreciates that the message about the changing Arctic is more often driven by human emotion than data. So he sees it as a positive when large tour ships bring thousands of travelers to gawk at a crystalline glacier.

“If you fall in love with something, you’ll take care of it,” he said. 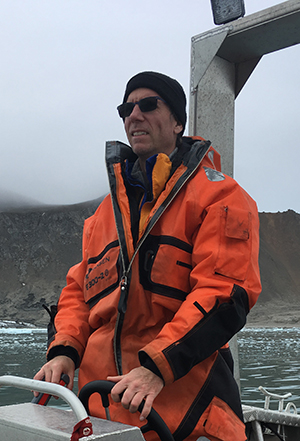 Stokes also works with the Deane team measuring glacial melt acoustically. But when asked what he noted about the changing Arctic, Stokes harkened back to his work on northern Canada’s Devon Island in the 1990s and early 2000s on the Haughton-Mars Project with NASA. Just west of Greenland, the island’s dry polar deserts are the closest thing to Martian terrain any researcher will find on Earth.

Stokes said he spent lots of time with his eyes to the ground, kicking over rocks, looking for signs of life. He then discovered an abundance of “micro oases” or hypoliths, small areas of vegetation that grow beneath undisturbed stones. Their abundance seemed to multiply between visits.

“I’d see a lush green ring where there used to be absolutely nothing before,” he said. Hypoliths can sprout from a sudden influx of nutrients and moisture around the carcass of a tundra animal, for instance. Or, as Stokes and his colleagues discovered, near areas of freshwater discharge from thawing glaciers.

“It’s a sign that the local ecosystem is changing and adapting. It’s neither a positive or a negative. It’s a shift,” Stokes said, “however small.”

Stokes and Charles Cockell from the University of Edinburgh published findings about hypoliths in the journal Nature in 2004, subsequently celebrated by media outlets as a “new sign of polar life.”

But these glacial meltwater-fed oases could yet be another sign of Arctic disturbance due to global warming.

“You always have to think about the big picture, Stokes said. “It’s about displacement. What was there has gone elsewhere. We’re talking about disrupting communities.”

Pioneer in discovering how sharks harness electromagnetic energy to se...