Two researchers from Scripps Institution of Oceanography at the University of California San Diego are about to tether themselves to an ice floe in the Arctic for the sake of oceanic microbial discovery.

Jeff Bowman, a biological oceanographer at Scripps Oceanography, joins 100 scientists and crew members this month aboard a German research icebreaker that froze itself into sea ice for an entire year. MOSAiC, which stands for the Multidisciplinary Drifting Observatory for the Study of Arctic Climate, is considered to be the largest polar expedition in history and the first international collaboration of this scale venturing to fill gaping holes in the science behind Arctic climate change.

“There’s very little winter data for the Arctic simply because of logistics. It’s just incredibly difficult to get in there to do it,” Bowman said.

Bowman leaves San Diego on Jan. 22 for a three-month leg aboard the German research vessel Polarstern. But to get there, the father of two flew around the world for preparatory Arctic training on everything from ice coring to rifle defense against polar bears. Luckily, the former Army Airborne Ranger is an experienced shot.

“They have firecrackers, noisemakers and infrared binoculars aboard so it would be fairly unlikely that we’d encounter one up close,” Bowman said.

(Take a look at the Bowman Lab’s blog for more on Alaska-based training for the Arctic journey.)

Bowman will fly to Tromsø, Norway where he will board a Russian icebreaker travelling through 24-hour Arctic darkness toward the location of R/V Polarstern, which can be tracked on the MOSAiC website. MOSAiC’s designers chose to replicate the tactics of the record-breaking expedition of Fridtjov Nansen, first to reach the northernmost latitude in 1893. Nansen pioneered the daring feat of freezing his wooden ship into the Arctic ice and allowing it to drift in circumpolar currents for three years.

“This is the only way to do this research,” Bowman said. “You can’t just park a research station on the Arctic in the winter. If there was a land mass up there, then we would have already plunked a base on it somewhere.”

There’s a lot less ice in the Arctic now than in Nansen’s day, Bowman said. In fact, the expedition had trouble finding an ice floe that’s thick and strong enough to support the research base.

Bowman’s graduate student, Emelia Chamberlain, will join R/V Polarstern on May 29 for two legs or a total of six months. The data she plans to collect is the backbone of her future dissertation on “how sea ice breathes,” she said.

“I’m interested in the microscopic organisms that live underneath the ice that breathe the same way we do, taking in oxygen and releasing carbon dioxide,” Chamberlain said. Characterizing the structure of those communities will help us understand whether the Arctic is creating more carbon dioxide overall or the opposite, Chamberlain said. 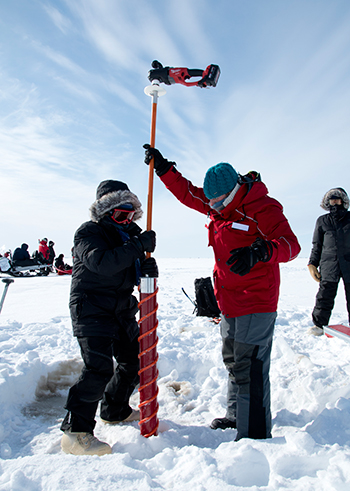 The Arctic’s contribution to the global carbon budget is a question that draws experts in atmosphere, sea ice, oceanography, chemists and biologists to this project.

Over the course of a year, teams of researchers from 20 countries across myriad disciplines will tag team on and off the Polarstern, each spending a number of months onboard to conduct various experiments. Some want to know how Arctic clouds form. Others, called the “ice bosses” aboard the vessel, venture out weekly on hand-rigged catamaran kayaks to take small ice core samples.

Bowman is managing multiple projects. To chip away at the global carbon budget question, he needs pristine, year-long data on the microbiology of the surface Arctic ocean.

The designers equipped Polarstern with a pipe that continuously streams surface ocean water through the vessel so scientists can draw samples for experiments. Using an instrument called a membrane inlet mass spectrometer, Bowman can “sip out” dissolved gases like argon and oxygen from the ocean water stream. Calculations applied to the gas contents can then tell scientists whether the rate at which the microbes are photosynthesizing or respiring carbon.

Bowman also wants to know how interactions between sea ice and algae might play into the global carbon budget. Arctic sea ice is on the decline at a rate of 3.6 percent per decade, according to data collected since 1979 from the National Snow and Ice Data Center. In 2019, Arctic sea ice reached its second-lowest summer minimum since continuous satellite monitoring began.

“There’s very, very little data for any part of the year ... certainly during wintertime,” Bowman said.

Bowman specifically chose to travel on the third leg of Polarstern’s journey to witness the effect of the transition to daylight on the behavior of the Arctic microbiome.

He hopes to  board Polarstern in February and work in darkness until the sun reemerges over the Arctic horizon in late March.

Securing spots on MOSAiC’s crew was a years-long endeavor. Bowman heard about the idea more than  a decade ago. The research dream became a $155 million reality once Germany committed the vessel.

A nearly $1.2 million grant from the National Science Foundation is supporting Bowman’s and Chamberlain’s journey in conjunction with the University of Rhode Island.

Joining MOSAiC presents myriad firsts for Chamberlain: It’s her first time in the Arctic, her first cruise and first time handling a rifle and a snowmobile. But for a woman who knew she wanted to study marine biology since she first read a book about penguins at age 12, the MOSAiC expedition is a dream come true.

“This is a once-in-a-lifetime research expedition,” Chamberlain said. “Twelve-year-old me would make sure I write down everything that happens.”