Too Many Fishers in the Sea: The Economic Ceiling of Artisanal Fisheries

A new study shows that even if fishers used the most efficient and sustainable known practices, they wouldn't generate enough revenue to maintain a living above poverty level.

There is a silver lining, however. The study highlights that if fish stocks were allowed to recover, total annual fishing revenues could increase by 70 percent. This represents an increase from $141 million now to $240 million per year in the future.

Still, in areas with large numbers of fishers, such as Mazatlan and Guaymas, even if depleted fisheries recovered, fishers would not earn enough money to pay for food, education, health services and clothing. For the Gulf of California as a whole, as much as 80 percent of fishers would continue to live in poverty.

“Our results demonstrate that fisheries have a maximum economic capacity. Failing to recognize that will harm our efforts to conserve marine resources and to provide economic security for coastal communities,” said lead author Alfredo Giron, a graduate student at Scripps.

While fishers around the world are often recognized as vulnerable groups frequently living in poverty, governments seem invested in increasing the number of people trying to make a living out of this activity. For example, between 2006 and 2010, the total number of small-scale fishing boats in the Gulf of California rose from around 18,000 to approximately 25,000. Increasing the number of fishers not only exacerbates unsustainable exploitation of marine ecosystems, but will also compromise fishers’ well-being since their individual revenues will continue to decrease year after year.

“We would not like the only take-home message to be that the only solution to achieve sustainable fisheries is to have fewer fishers, but it definitely needs to be part of the conversation,” said Giron.

Oversaturated fisheries are just one part of the problem that fishing communities face in this region, Giron said. Previous studies highlighted the importance of addressing other social problems like marginalization of coastal communities and lax or inconsistent enforcement of sustainable practices.

“Focusing on the sustainable exploitation of fisheries is still important to preserve our marine biodiversity,” said Octavio Aburto, a marine ecologist at Scripps Oceanography and co-author of the study. “However, if we want to talk about human well-being, we need to start thinking further ahead within a broader social, economic and ecological perspective.”

“It is not a matter anymore of mitigating the effects that fisheries overexploitation has on particular locations, but about designing adaptation strategies that will provide coastal communities with more economic opportunities,” said Andrew Johnson, co-author of the study, and a fisheries biologist consultant for the Food and Agricultural Organization of the United Nations.

The study, published Nov. 3 in the journal Fish and Fisheries, highlights the need for policymakers to recognize the potential of the oceans as a platform for sustainable economic development and encourage present-day fishers to pursue livelihoods that stand a better chance of providing stable income over the long-term. 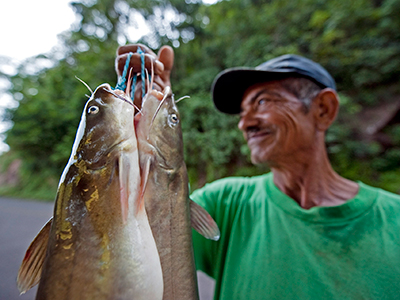 For example, ecotourism has been demonstrated to provide alternative and sufficient incomes in the Gulf of California, such as in Cabo Pulmo National Park. Other economic alternatives include offshore wind and tidal energy projects, as well as innovative economic instruments, such as blue bonds and payments for ecosystems services.

“The challenge will be to generate alternate economic opportunities that fishers would be willing to accept, as most times fisheries are not only a job, but a form of living,” said Andres Cisneros, co-author of the study and research economist at the University of British Columbia.

With this in mind, this paper aims to alert not only fisheries managers and sector leaders, but development economists, anthropologists, sociologists, and new sustainable industries.

Giron was funded by CONACYT (CVU 579904) and Fulbright Garcia-Robles (LASPAU ID 20140963) doctoral program fellowships. Johnson was supported by NSF grant DEB-1632648. Cisneros is supported by the Nippon Foundation Nereus Program. This project was supported by The Nature Conservancy through the project “Mapping Oceans Wealth.”

Related Image Gallery: Too Many Fishers in the Sea