Just 50 feet from the beach, members of the next generation of scientists are using their summers to conduct research at Scripps Institution of Oceanography at UC San Diego. 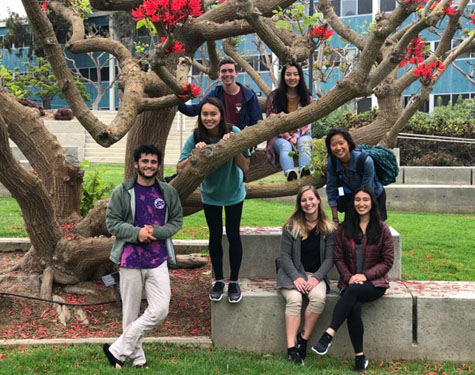 This year, MPL welcomed 16 undergraduates to the program. Once admitted, each student was paired with a principal investigator (PI) with whom they spent ten weeks working in the lab. In addition to working with their PI, the interns connected with graduate students and other Scripps faculty members throughout their experience through weekly seminars and office hours.

“The program goes beyond the typical undergraduate experience and gives a sense of how research is conducted,” said MPL Director Bill Kuperman. “It shows the students that progress will be made on multiple levels between routine and exciting.”

MPL interns conducted research in a lab five days a week and earned stipends–but when the clock struck 5 p.m. each day, it only took a few minutes for the interns to make their way to the beach for some relaxation. With flexible starting dates, some interns only overlapped for a few weeks, and yet the group was still close–hanging out after work and on the weekends, some working in the lab together.

“The students meet their peers who have different backgrounds and also meet researchers, from grad students to postdocs to senior researchers,” said Kuperman. “Research groups have a sense of camaraderie which needs to be experienced firsthand.”

The PIs who participated in the program were also grateful for the experience of working with curious students. Kuperman remarked, “Besides getting very effective help and the satisfaction of mentoring, researchers meet potential future grad students. When the mentor and mentee are comfortable with their work, this produces an almost no risk situation for a future admit.”

The students were encouraged to go beyond their specific scientific research and explore Scripps and UC San Diego. The program coordinated unique opportunities for the interns to make the most of their ten weeks in La Jolla. This summer, the group of interns spent a day aboard R/V Robert Gordon Sproul, enjoyed a behind-the-scenes tour of Birch Aquarium at Scripps, and toured the California Institute for Telecommunications and Information Technology on campus. (View photo gallery.)

Here is what just a few of the students had to say about their experience as a 2018 MPL summer intern.

For Jensen DeGrande, the MPL internship program exceeded her expectations by showing her how to apply for grad school, implement research methods firsthand, and forge unique connections with her peers.

“Working in Chadwell’s Lab was way better than any expectations I ever had,” DeGrande said. “The second week we went out on a research cruise off the coast of Oregon. We did the field work of deploying the transponders we had been reading papers about. We got to see it in action, and that was really cool.”

As a rising senior, DeGrande knew that graduate school would be the next stepping stone in her science career.

“This program has shown me how feasible grad school is,” DeGrande said. “I always thought grad school was hard to get into, hard to pay for, hard to decide what to study, but now that I’ve had this experience, I have a better grasp on what I want to do with my future, what kind of research I want to do and why.”

DeGrande said she is grateful for this program because it goes beyond the classroom: “I’ve got a lot of experience with the research methods being used because in classrooms they teach you what’s going on in the field, but with research you get that hands-on experience.”

When DeGrande was not working, she enjoyed going to the beach, watching the surfers, and exploring the city with other interns.

“It was enlightening working with the other interns because we all come from different places in the United States and yet we came together and shared our knowledge with one another,” she said.

Alex Gonzalez, a rising senior at Oregon State University, reflected on his time in the MPL internship program with gratitude.

“I’ve learned a whole new field of science,” said Gonzalez, a physics and math major who spent most of his time at Scripps learning signal processing and ocean acoustics under PI Bill Hodgkiss.

In the Hodgkiss Lab, Gonzalez learned about match field processing (MFP), a method used to track and locate sources in shallow water. Gonzalez’s project this summer was to solve an inversion problem by knowing certain parameters of a system to determine other physical properties of a specific environment.

“The most beneficial part about this program for me,” Gonzalez said, “is being able to explore other areas in science that involve physics.”

Back at Oregon State, Gonzalez conducts research in high energy physics. “Having this opportunity to explore ocean acoustics opens me to a new set of problems and problem-solving techniques that allow me to grow as a scientist,” he said.

Gonzalez reflected on being part of the tight-knit group of interns: “I’m really surprised because we have a diverse group of people here but you get to know them as people and not just majors, academics, and their future endeavors. We really enjoy each other.”

Gonzalez said completing this program means a lot to him because it’s the end of the best summer he has had so far.

“This program allows me to write my senior thesis on the research I completed here,” he said, “and thanks to this program I will be able to graduate and take the next step.”

Virginia Pan, a rising junior at Duke University, knew she wanted to spend her summer at Scripps in the MPL internship program. After hearing about the opportunity from a previous MPL summer intern and close friend, Pan was attracted to MPL because it offered an engineering perspective to oceanography.

As an electrical and computing engineer major at Duke pursuing a certificate in marine science, Pan said the mission of the Jaffe Lab aligned with her scientific interests.

“I applied to a couple research programs, including the Scripps’ SURF program, but this was my top choice because of the opportunities to have Jules Jaffe as my PI and work in this location,” Pan said.

In the Jaffe Lab, Pan contributed towards the overall mission of the lab’s research. Throughout her research here, Pan used a lot of equipment on the consumer market. The goal of the project, she said, is to create a low-cost camera for underwater imaging that can be used to measure water velocity. Achieving this goal would be beneficial, Pan explained, because by making these products cheaper, researchers can mount multiple cameras in one area, like a reef, for a better overview of what is going on in that marine environment.

“This is my first research experience working in a lab,” Pan said, “so it was extremely useful in getting to see and experience what research in this field is like and thinking about whether or not I want to go to grad school.”

Pan recognizes that this program was formative in the planning of her remaining years at Duke and it helped her decide that she wants to learn more about signal processing.

One thing that stood out to Pan about this program was the opportunity to work with so many different people at Scripps. “It’s nice to get exposed to a lot of ideas,” said Pan. “Scripps is really big and you can just talk to people who are at the top in their field and get to know what they’re doing.”

Applications for the 2019 program will be available starting October 2018.