Every year, changemakers from the Jacobs School of Engineering, Rady School of Management, and Scripps Institution of Oceanography at UC San Diego compete in the Triton Innovation Challenge. The competition brings together three communities from UC San Diego in a challenge centered around supporting startups that showcase the intersection between innovation, sustainability, and entrepreneurship.

In December 2018, six teams presented their ventures on a night full of social and environmental innovation at the 7th annual Triton Innovation Challenge.

This year’s challenge welcomed the most educationally diverse class of competitors yet, consisting of postdoctoral scholars, staff, alumni and undergraduate and PhD students. Consistent with previous competitions, the program received twenty-five applications.

After two rounds of pre-screening, six teams were selected to present their final pitches in the Triton Innovation Challenge competition. This year, Scripps had a substantial presence: three out of the six startups were led by members of the Scripps community—and one of those three placed in the top three. These Scripps startups participated in a rigorous four-week startup prep program, which matched them with external business mentors, a startup teaching team from the Institute for the Global Entrepreneur, and expert coaching on their business and pitch in advance of the semi-finals and finals.

First place and the Audience Favorite Award went to Rady School of Management-led startup Bevea—a naturally caffeinated and sustainably-sourced health beverage. Founded by Scripps PhD candidate Jack Pan, Ocean Motion Technologies—a company harnessing the energy from ocean waves and turning it into electricity and compressed air—placed second in the competition. Third place was awarded to Khepra, a startup that sustainably produces biofuel, which was led by undergraduate student Julie Kring. Kring studies Biochemistry and currently works in the Brian Palenik Laboratory at Scripps. 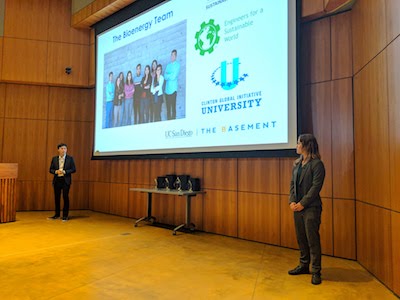 The BioEnergy Project is a venture led by Environmental Systems undergraduate student Enid Partika. The startup is a food-waste-to-food-and-fuel system that uses food waste from restaurants and communities to generate biogas electricity and organic fertilizer used to grow produce. Through this process, the BioEnergy Project closes the carbon loop and re-purposes waste products from the food industry. 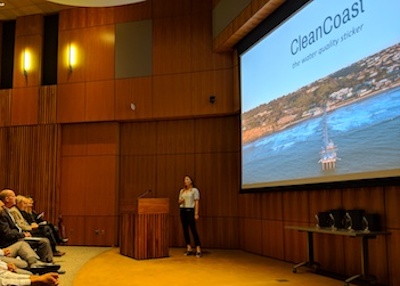 Co-founded by Scripps alumna Laura Walsh (MAS ‘17), CleanCoast is a one-time use sticker designed to be worn in the water that alarms surfers, divers and others at the beach when pathogens are present in hazardous quantities. Specifically, this water pollution detection tool can respond to specific pathogens that are designated unsafe by the U.S. Environmental Protection Agency (EPA). The sticker will be tailored to detect pathogens that are of high concern in particular regions. CleanCoast will launch in San Diego, where the sticker will initially be programed to turn red if EPA-designated levels of Staphylococcus and/or norovirus are exceeded. 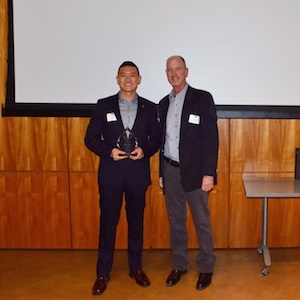