Voyager: Are there any aquatic beetle species?

There are more insects on land than any other animal and beetles are the most numerous insects we know. Some 400,000 different beetles are known to us and most live on land, but about 13,000 types of beetles are aquatic. Most of them live in freshwater places like ponds, lakes, streams, rivers, wet rocks, or waterfalls.  Some are even found in pockets of water underground that are called aquifers. 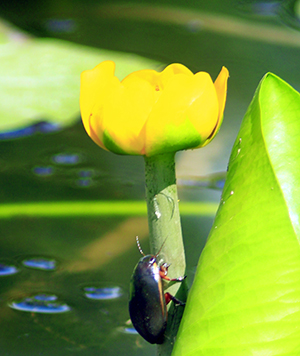 Some examples are diving beetles that dive underwater with an air bubble trapped under their wing cases and whirligig beetles that swim in circles on the water surface when disturbed.

Truly aquatic beetles spend all their life stages (eggs, larvae, pupae, and adults) in water, but others spend only part of their life stages in water. They are often found among the aquatic plants that they eat. Fish and some other animals in the water eat beetle larvae but not many animals eat the adult beetles. Although some aquatic beetles are found in salt marshes or even salt ponds, no beetles live in the sea. 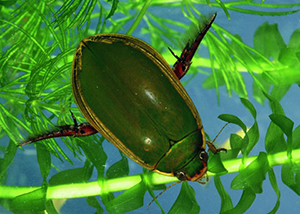 Several hundred different types of beetles can be found on beaches or along seashores around the world. They are restricted to coastal areas where adults are known to hunt for small marine animals in washed up seaweeds or sea grasses but never found out at sea. These coastal beetles are quite different from aquatic beetles living in freshwater and there is a lot we still don’t know about them.

–      Lanna Cheng is a marine biologist at Scripps Institution of Oceanography at UC San Diego whose specialty is the study of marine insects.