The Zooplankton of the San Diego Region guide was initiated as a tool to assist members of the public, students, and others curious about the drifting planktonic animals found in local marine waters near the coast of San Diego. 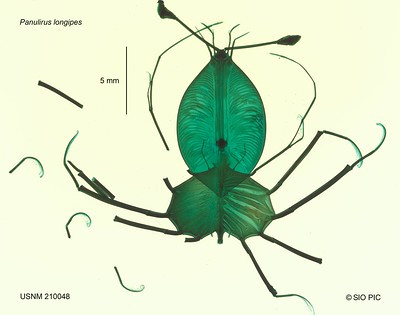 The Martin Wiggo Johnson phyllosoma slide collection image galleries are images taken of reference slides of the different stages of the free-swimming or drifting larval phase of both spiny and slipper lobsters.  The larval phase of these lobsters is commonly called the phyllosoma phase.  The palinurid or spiny lobsters and the genus Scyllarides of the scyllarid or slipper lobsters may spend anywhere from 6-12 months adrift in the plankton feeding on small bodied zooplankton before they are ready to reorganize their bodies during metamorphosis and transition to the post-larval puerulus phase (Johnson 1956; 1960; 1974).  They will then spend a few more months in the plankton until they are ready to molt to the juvenile phase, settle near the seafloor and begin their lives as benthic or bottom living lobsters (Serfling & Ford 1975).  Most of the slipper lobsters spend approximately 2-3 months as phyllosoma in the plankton and some transition directly to the juvenile, while others metamorphose into the postlarval nisto phase and then molt into the benthic juvenile (Lyons 1980; Lavalli & Spanier 2007).

Dr. Martin W. Johnson, an influential and celebrated Scripps professor, researcher, and co-author of the legendary volume The Oceans: Their Physics, Chemistry, and General Biology, 1942), constructed this unique slide collection.  These slides serve as an excellent reference collection of spiny and slipper lobster phyllosoma stages from samples collected all over the world.  All of these lobster phyllosoma specimens were sorted from samples from many different oceanographic cruises that are archived within the Pelagic Invertebrate Collection at SIO.  Dr. Johnson had many different researchers sorting out these phyllosoma larvae throughout the decades that he worked with at SIO.  He finally began to set these specimens in slides as a post-retirement project in the late 1970s through the early 1980s.  Each lobster larva was stained in fast green and mounted in Canadian balsam or clarite.  In nature, these animals are flat, leaf-like, and nearly transparent; however, this staining process makes these specimens appear varying degrees of green and accentuates the tiny characters needed during visual inspection for staging and identifying these animals.

This collection of reference slides was re-discovered when a Scripps researcher and staff requested a reference set of the eleven phyllosoma stages of the California spiny lobster from the USNM at the Smithsonian Institution.  In collaboration with the Invertebrate Zoology Lab at USNM, SIO Museum Scientist Linsey Sala worked with the USNM staff to digitally photograph this slide collection, and make them available to the public.  The images of these reference slides are now hosted on the web-based searchable database at the Smithsonian and available here on the SIO Pelagic Invertebrate Collection website.

The Zooplankton Database (ZooDB) is a searchable data module to extensive zooplankton data from the California Current System from 1951 to present produced by the Mark Ohman lab.

The Brinton Townsend Euphausiid Database (BTEDB) is a searchable data module to extensive euphausiid data from the California Current System from 1951 to present maintained by the Mark Ohman lab.

The Brinton Euphausiid Plot Gallery presents unpublished geographical distributions of selected euphausiid species as a companion to Brinton and Townsend (2003. Decadal variability in abundances of the dominant euphausiid species in southern sectors of the California Current. Deep-Sea Res. II 50: 2469-2492).