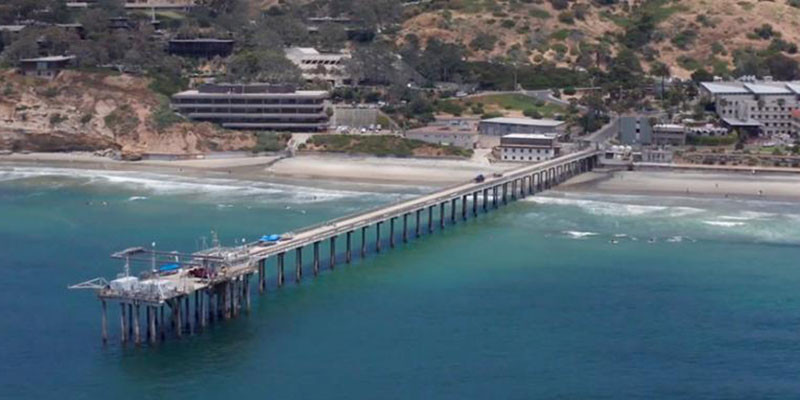 The modern Scripps Pier was built in 1988, replacing the original pier built in 1916 with funds provided by its namesake patron, and is considered one of the world's largest research piers. Data on ocean conditions and plankton taken from the pier provide an unparalleled source of information on changes in the coastal Pacific Ocean.

The patronage of the Scripps family continues into the modern day. Most recently family members supported the refurbishment of the pier’s railings along with construction of an adjacent laboratory.

A source for seawater

The pier also provides a supply of filtered seawater, a critical resource for a marine institution, to an array of laboratories and aquaria. Pumps are located under the pier deck and draw about one million gallons of seawater each day to supply fresh seawater. There is a roughly six-foot rise in elevation from the base of the pier to its end to allow seawater to flow by gravity to a trough at the shore where the water is filtered and then routed to a series of holding tanks.

The seawater is then delivered to two Experimental Aquarium facilities on the Scripps campus, Birch Aquarium at Scripps, the NOAA Southwest Marine Fisheries Science Center (SWFSC), the Hydraulics Laboratory, and individual laboratories. A tap located between SWFSC and Scripps Oceanography’s Keck Center at the north end of campus makes the seawater available to private and commercial aquaria free of charge.

Beyond the surf line 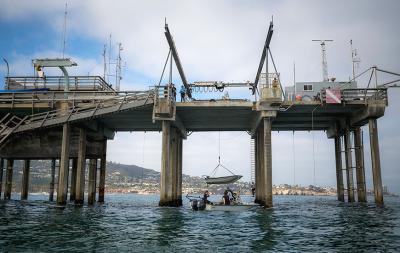 Small boats are launched from either side of the pier to support nearshore research, to supply feed for marine organisms at Birch Aquarium at Scripps, and for scientific diving training operations. A three-ton overhead bridge crane lowers boats into the ocean. Roughly 300 small boat operations take place every year. 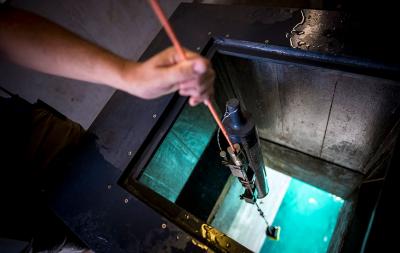 The pier is used as an instrument mounting platform and continuous sampling station. Scripps Oceanography has the longest daily seawater surface temperature-monitoring program in the Pacific Rim, which originally started in 1916. To this day, collection of seawater for temperature and salinity readings is done by hand and maintained by the Shore Stations program at Scripps.

A platform over the ocean

The pier also houses meteorological stations and radar units for measuring surface currents. Intake valves at the end of the pier supply air samples for analysis of airborne particles known as aerosols and a variety of gases including oxygen and carbon dioxide.

On the pier’s pilings, the Scripps Plankton Camera system documents the types of plankton in the water column and their quantity. Imagery is presented to viewers in real time. Scripps undergraduate and graduate courses may do field work on the pier, and experiments are conducted including measuring plastic degradation.

Additional ecological data captured from Scripps Pier can be found via the Scripps Ecological Observatory website.

This ensemble of instruments is a vital resource that enables monitoring of hazards such as blooms of harmful algae, oil spills, or sewage runoff. It also contributes to a core Scripps Oceanography mission to make high-quality, long-term observations of fundamental ocean conditions.

Scripps Pier is also a vital teaching tool, with undergraduate and graduate classes visiting the pier to learn about data collection, instrumentation, chemistry of the ocean, and more. Birch Aquarium's "Beach Science" program, funded through the Price Philanthropies Ocean Science Education Fund, brings sixth-grade students from underserved communities to the beach to learn about ocean science, which includes a full-day field trip to Birch Aquarium and the Ellen Browning Scripps Memorial Pier.

Can you walk on Scripps Pier? Because of the sensitivity of the science instruments on the pier and the nature of the operations that take place there, the Ellen Browning Scripps Memorial Pier is generally not open to the public outside of special events.

Additionally, Scripps Community Outreach for Public Education (SCOPE) is a student-led, volunteer-driven, outreach program that specializes in connecting groups in the general public directly with the incredible science conducted at Scripps Institution of Oceanography.

SCOPE also offers tours of the pier, Hubbs Research Aquarium, and the coastal reserve to school groups and other members of the public.

More information on scheduling tours with SCOPE can be found here.