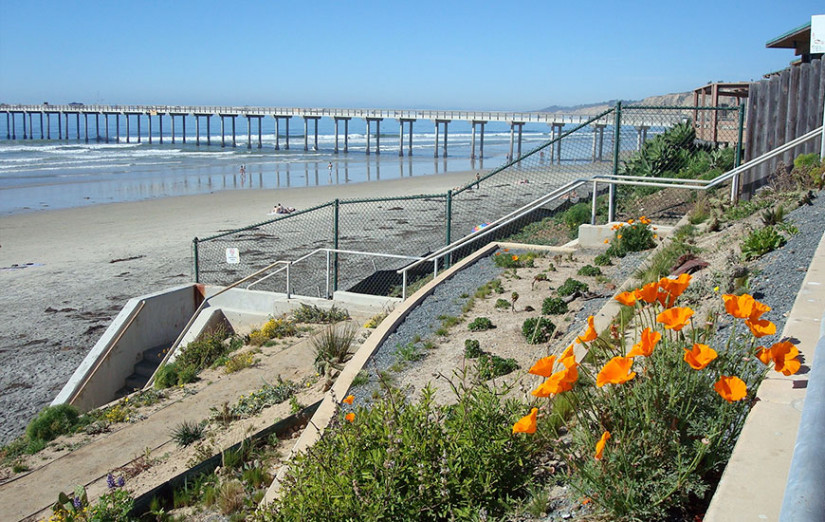 A series of outfalls on the beach adjacent to Scripps Institution of Oceanography discharge seawater back to the ocean. Because the ocean adjacent to Scripps Institution of Oceanography has been designated as an Area of Special Biological Significance as well as a Marine Protected Area, UC San Diego takes special precautions to ensure that these outfalls do not contain pollutants.

Scripps Institution of Oceanography uses an open seawater system to support its on-site research and aquaria activities. The open seawater system currently supplies approximately 500,000 to 750,000 gallons per day of seawater to laboratories and aquaria. The seawater is ultimately discharged back to the ocean via outfalls.  Scripps Oceanography has five permitted outfalls, four of which discharge seawater and one that discharges storm water in accordance with the conditions and provisions of a National Pollutant Discharge Elimination System (NPDES) permit. These outfalls discharge into the San Diego-Scripps Area of Special Biological Significance, located just north of the San Diego-La Jolla Ecological Reserve.

The five outfalls are located as follows:

Scripps Institution of Oceanography is committed to meeting clean water standards to protect the beneficial uses of the San Diego-Scripps Area of Special Biological Significance and to comply with the conditions of the NPDES permit. Seawater that is used in aquaria that contain non-indigenous species or genetically modified organisms is treated prior to discharge. These treatment systems consist of a combination of filtration, ultraviolet sterilization, and, in most cases, ozone disinfection.  If a medication is used in an aquaria to treat an animal or a chemical is added to the seawater, the seawater from that system is discharged to the sanitary sewer system in accordance with City requirements.

Questions about the UC San Diego outfall system can be directed to Kimberly O’Connell with Environmental Health and Safety at koconnell@ucsd.edu.