Scripps Institution of Oceanography houses several art installations, some of which are deeply connected to the science undertaken here.

This series of art installations around campus at Scripps Oceanography showcases the world-renowned climate research conducted at the institution. The Scripps Science-Art Collaboration Collection reflects objective scientific knowledge in art works both realistic and abstract, and was started with the 2017 collection Weather on Steroids: The Art of Climate Change Science.

Scripps Science-Art Collaboration Collection explores the state-of-the-art scientific evidence of current and impending climatic changes, their causes and impacts as well as related opportunities leading to a natural evolution of society toward a cleaner, healthier and more sustainable way of life.

This collection includes four works of art, each linked to and interpreting the human-induced rise in carbon dioxide (CO2). Utilizing storytelling and sculptural forms, 400 Parts Per Million compares the invisible labor of women to that of microorganisms and elucidates the impact of climate change on Earth. These works are based in large part on collaborations with Scripps climate scientist Ralph Keeling.

The signature piece of the installation is made from one million clear glass beads and 400 lightly colored glass beads to represent what man has done in the last 180 years to change the atmosphere.

The Magdalen
Inspired by Georges de la Tour’s painting The Magdalen with the Smoking Flame (France, circa 1638-1640). This sculpture of a pregnant Magdalen is cast from volcanic earth obtained by Hersko in Antarctica, while a Fellow with the National Science Foundation Antarctic Artists and Writers Grant. The figure, pondering existence and death, evokes the contemplation of the destructive forces that humans have unleashed on the planet. The Magdalen figure is gazing at a glass orb, the actual flask used by scientists to collect air samples. 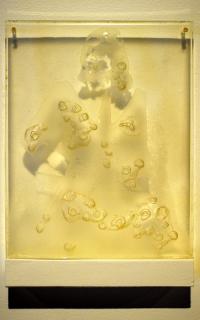 Portrait of Anna Schwartz
Anna Schwartz represents the unknown women explorers who were prohibited from going on ocean expeditions. As a fictional woman explorer, Schwartz disguised herself as a man in order to travel to Antarctica with Admiral Byrd’s 1939 expedition. A naturalist and photographer, Schwartz was obsessed with seeing and photographing the transparent planktonic pteropods, Limacina helicina or sea butterfly, and its predator the sea angel.

Cast in silicone, the portrait includes imprints of sculptures in the shape of the sea butterfly, an iridescent animal which travels through the water with flaps of its wing-like foot. Due to ocean acidification, this pelagic snail, as well as many other organisms that use calcium to make their “skeleton,” like oysters and corals, can no longer fully form their shell in some parts of the ocean. The sculpted sea butterfly shells were removed during casting to suggest a fossil record of a soon to be extinct creature.

Anna Schwartz: Self-portrait with Diatoms
This piece references the work and life of Easter E. Cupp, the first woman to receive a PhD in Oceanography in North America, from Scripps in 1934. Her 1943 book Marine Plankton Diatoms of the West Coast of North America was a seminal publication on the subject.

The floating presence of Anna Schwartz is created with mirror paint on glass, as well as shadows cast inside the aluminum box. Set in the Antarctic almost a century ago, with diatoms magnified around the figure of Schwartz disguised as a man. 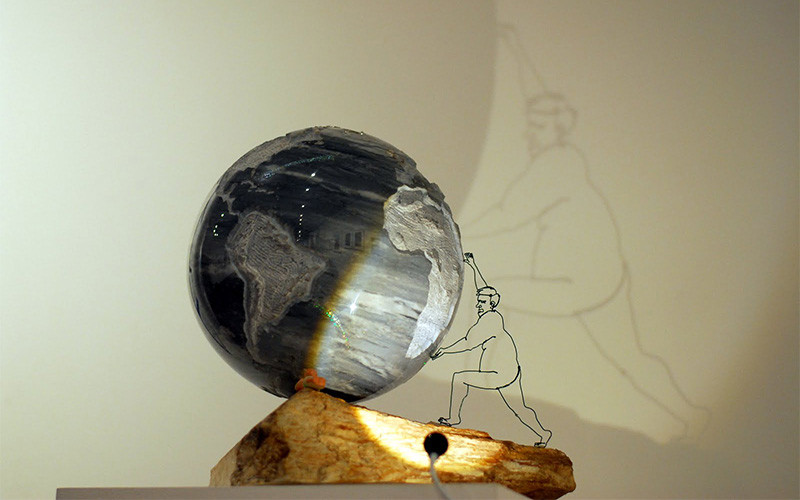 Tipping Point Climate Change
Lileane Peebles
This sculpture reflects the artist's vision of the threat of rising sea levels overwhelming the land. The landmasses on the globe appear lower than the level of the oceans, dramatizing the accelerating sea-level rise. Transparent resin simulates Atmospheric Rivers, which are bolstered in the warming climate, shown as three tracks in the Northern and Southern Hemispheres. Incorporation of glass in the Arctic depicts the diminishing sea ice. The satirical wire figure on the base pushing the globe off the precipice represents man’s greed and mistreatment of our planet. His rejection of scientific results and denial of the facts is shown by the disregard for the book on which he stands. Several equations inscribed on the precipice symbolize the solid scientific base informing solutions, which could at least slow the rate of change.

Tipping Point Climate Change was created in consultation with Art Miller, Alexander Gershunov, and Marty Ralph. The wire figure is an interpretation of Lilleane’s design by Spencer Little. 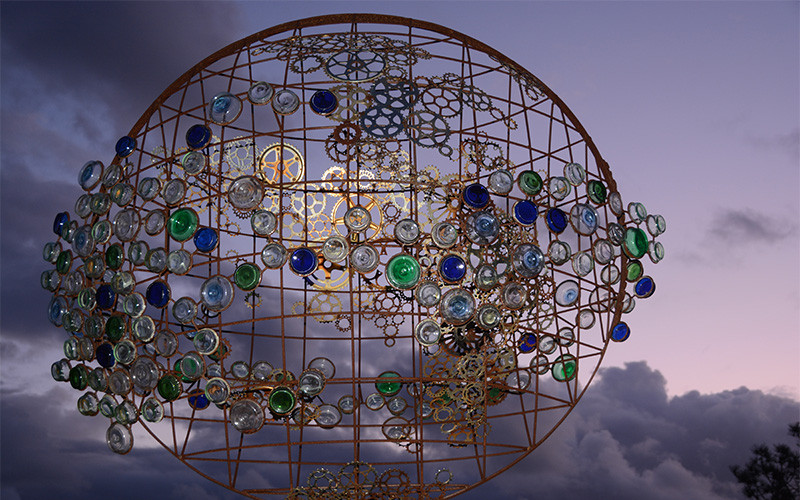 Atmospheric Rivers
Oscar Romo | 2016
Romo’s sculpture explores the concept of atmospheric rivers (ARs) – ephemeral filaments of moisture-laden winds that transport water vapor transport from the tropics to the mid and high latitudes. There typically are several ARs occurring simultaneously around the globe. When they make landfall over mountainous terrain, the moist flow is forced to rise, efficiently condensing into liquid water and often causing extreme orographic precipitation. The rainfall amounts that ARs are capable of producing in California over a couple of days are similar to those associated with land-falling hurricanes. Historically, ARs provide about half of California’s water supply. They have been responsible for more than 80 percent of all major floods for the US West Coast. In a warmer future, ARs will become more moist and intense as warmer air can hold more moisture. The role of ARs in driving water resources and flood risk is becoming more important in our warming climate.

Made from repurposed materials, Romo’s Globe symbolizes Nature’s power. As a practitioner of “natural systems design,” Romo argues that resilience can be accomplished through the understanding of nature and its remarkable ability to adapt and the human capacity to learn from the natural world. Repurposed objects in the installation communicate a concern over our excessive use of fossil-fueled energy and massive generation of waste but also demonstrate an opportunity for us to become more efficient and respectful of our natural resources by reducing, recycling, reusing, and recovering goods.

Atmospheric rivers are shown as rivers of glass, their colors indicating the content of water vapor as detected from satellites. 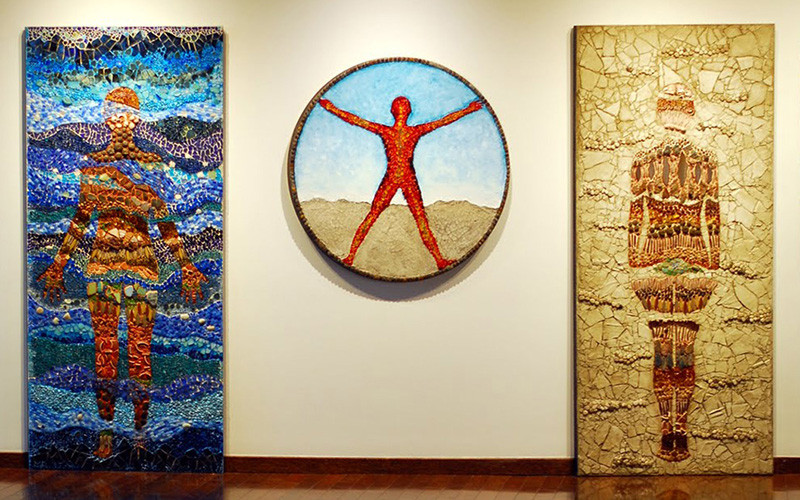 These artworks are a dramatic depiction of the effects of climate change artistically downscaled from global to personal scales as reflected on a human-shaped embodiment of Earth.

Ablaze
In a direct allusion to global warming, these fiery chunks of recycled cast glass are a graphic rendition of rising temperatures, and wildfires burning out of season and control.

Dust & Dissolution
These artworks depict the dichotomy between drought and floods; the destructive power of extreme weather phenomena - more and more prevalent in California - represented by the increasing volatility of water.

Dissolution
In this poignant reference to floods (whether created by atmospheric rivers, hurricanes or other strengthening storms over a rising sea level), the Earth is delicately portrayed by a female silhouette, covered in organic textures, evoking a physiological map of the planet. It is immersed in water.

Dust
In this companion piece to Dissolution, a human silhouette appears to be in the process of being overtaken by the surrounding desert, a barren landscape of dryness and heat. It is a dramatic depiction of drought, which is also becoming more commonplace in drought-prone regions such as California.

Luna based her pieces on research results by Alexander Gershunov. 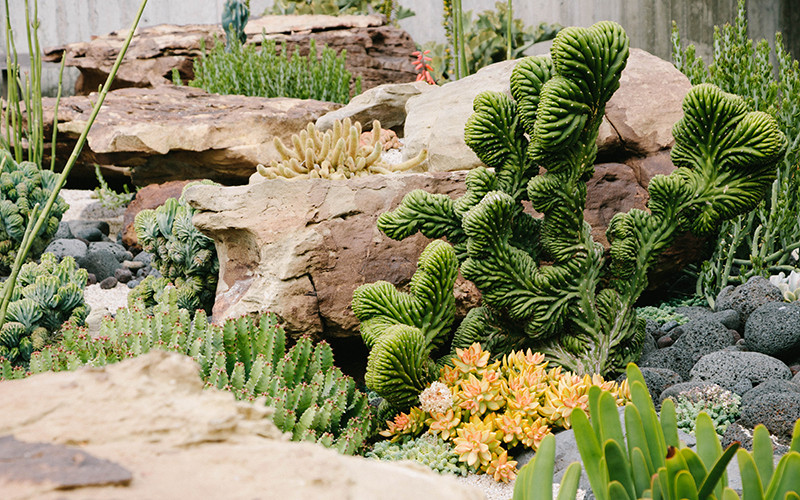 The McReynolds Family Coral Reef Garden
Inspired by the similarities between succulents and coral reefs, two Masters of Advanced Studies students spearheaded the McReynolds Family Coral Reef Garden. Located outside of Eckart Building, the garden emulates the structures and zones of a coral reef, using coral-like succulents as terrestrial counterparts to these reef-building animals. 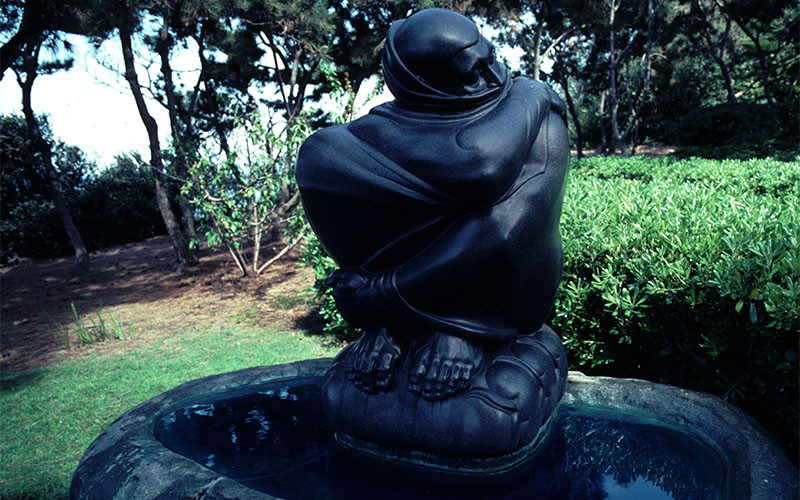 Spring Stirring
Donal Hord | 1949
This sculpture was donated by Cecil and Ida Green in 1964 as a gift to their good friends Judith and Walter Munk. 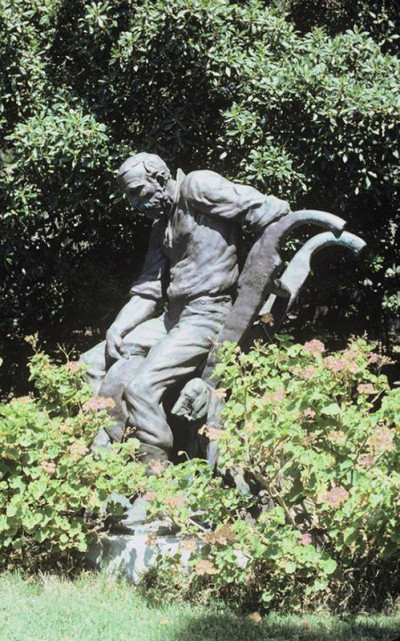 The Ploughman
Arthur Putnam | 1910
This sculpture is in the garden behind the old directors house and is part of a series commissioned by E. W. Scripps to represent the history of California.