Since its inception, SCOPE has grown in presence and impact in the Scripps and San Diego community, and broadened its mission from loosely defined outreach to a program mission centered around four specific goals:

The behind the scenes organization and planning is handled by a group of volunteer graduate student coordinators. If you are contacting SCOPE, you will be talking to one of us! We can help you schedule events, and will help to make your visit to SIO a positive, educational experience! 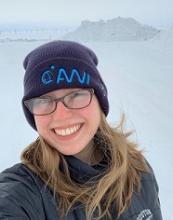 When describing water from summer melt ponds under the microscope during his 1893-1896 Arctic expedition, famous polar explorer Dr. Fridtjof Nansen exclaimed “I actually found bacteria – even these regions are not free from them!” And, of course, he was right! The majority of biomass on Earth is made up of these microorganisms and the Arctic Ocean is no exception with up to ~1 million bacteria found in 1 mL seawater alone.

As a Biological Oceanography PhD student in the Bowman Lab at SIO, I study the diversity and ecological roles of the microbial communities living inside and underneath sea-ice.

Fun Fact: To collect samples for my research I spent almost 6 months on a ship floating through the Arctic Ocean on an international polar expedition recreating Nansen's famous drift. When I'm not trapped in ice, I love to read, play board games, and snuggle with my cats! 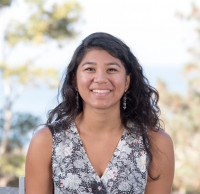 If you have watched the movie Elf, you may know the quote: "I passed through the seven levels of the Candy Cane forest, through the sea of swirly-twirly gumdrops, and then I walked through the Lincoln Tunnel."

It turns out the journey of plankton in the ocean may be just as swirly-twirly before shooting out along a fast current. As a PhD student in the biological oceanography program, I use physics and biology to study waters that contain plankton (small floating animals). Using both data collected from ships at-sea and from satellites above Earth, I can figure out where these plankton-filled waters may have come from and where they're going. Because many animals such as fish, seabirds, and whales, feed on patches of plankton, it is important to understand their small and large movements in the ocean.

Fun Fact: While I love swimming in the ocean, I also love flying through the sky! I've been ziplining, paragliding, and even skydiving and bungee jumping – both on the same day! 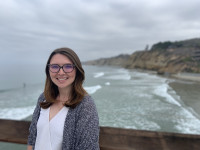 Remember the Mad Hatter from Alice in Wonderland? Well, he (and other hat makers from the 19th century) were crazy because of their work of producing hats and felting with mercury! Over time, we learned that mercury is a powerful neurotoxicant, and it bioaccumulates in the marine food web. This is why you should be concerned about eating tuna and swordfish, due to high levels of mercury!

I am a PhD student in the Marine Chemistry program, and I work in the Schartup lab to study mercury biogeochemistry. In other words, I study the various chemical reactions that mercury undergoes in the marine environment and how it gets incorporated into the marine food web.

Fun Fact: I went to a K-12 Spanish Immersion school, so I am fluent in Spanish! I love connecting with different people in Spanish, and maybe you'll catch me giving a Pier tour in Spanish! 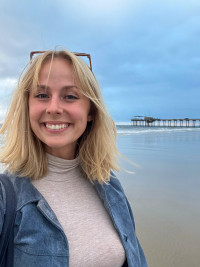 We've all seen a butterfly before -- perhaps you've even seen one flying around in your own backyard -- but did you know there are butterflies under the sea too? Right here in La Jolla Shores Cove and in ocean basins all over the world live tiny little creatures called pteropods or "sea butterflies"! Pteropods are small marine snails that swim in our open ocean, but they earned the name "sea butterfly" because of the way they flap their wing-like structures and "fly" through the water.

As a PhD student studying Biological Oceanography in the Decima Lab, I combine physical, chemical, and biological data to understand the tolerance of pteropods to the effects of climate change. Because so many other ocean animals rely on pteropods as food, it’s important to understand how pteropod communities react in response to a changing climate.

Fun Fact: Before becoming a PhD student, I used to be a princess! In highschool I worked as a character actor, which meant I sang, performed shows, sculpted balloons, and painted faces at parties all over the Bay Area. 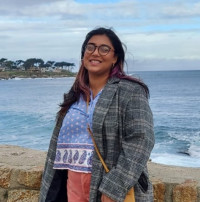 You may have heard the quote “Not all who wander are lost.” Phytoplankton, whose name comes from the Greek words “phyton” meaning plant and “planktos” meaning wanderer, are water-borne wanderers who are definitely not lost! These tiny plants that live in our oceans and lakes produce at least 50% of all the oxygen and absorb at least 40% of the carbon dioxide in our atmosphere. They form the base of the marine food web, play an important role in nutrient cycling, and inform us about climate change.

As a PhD student, I study phytoplankton in the Arctic and their response to climate change. I analyze optical data collected on ships to determine their potential as a basis for algorithms which can be applied to data from satellites. We have satellite data going back decades, so I can use my algorithm to figure out how Arctic phytoplankton have changed over the years and deduce if these changes are a
result of climate change.

Fun Fact: So far, I’ve been to four continents, eight countries, and over 10 states! My favorite place I’ve visited so far is Banff National Park in Alberta, Canada, which is three provinces away from my childhood home in Ontario, Canada.