U.S. Secretary of the Navy Ray Mabus announced the nation's newest research vessel will be named R/V Sally Ride, in honor of the former UC San Diego faculty member who was the first American female astronaut and the youngest American to fly in space.

The ship is owned by the U.S. Navy, will be operated by Scripps Institution of Oceanography, UC San Diego, and will have its home port at the Scripps Nimitz Marine Facility in Point Loma on San Diego Bay.

"Sally Ride's career was one of firsts and will inspire generations to come," said Mabus. "I named R/V Sally Ride to honor a great researcher, but also to encourage generations of students to continue exploring, discovering, and reaching for the stars."

Dr. Ride was selected for NASA's astronaut corps in 1978 and became the first American woman in space aboard Space Shuttle Challenger in 1983. In 1989, she joined the faculty of UC San Diego as professor of physics and was director of the university's California Space Institute. She died in July 2012 at the age of 61.

"Scripps has a century-long history of seagoing excellence that is vital to the well-being of our planet and its pressing environmental challenges, and we appreciate the confidence the U.S. Navy has in UC San Diego with stewardship of its newest, state-of-the-art vessel for global ocean exploration," said UC San Diego Chancellor Pradeep K. Khosla. "And now we are touched by the extraordinary honor that this ship is being named for Sally Ride, who, after serving our nation as a pioneering and accomplished astronaut, served on the faculty of UC San Diego for nearly two decades. Her commitment to teaching and inspiring young minds is legendary and we take tremendous pride in this prestigious and well-deserved honor for her legacy and for UC San Diego."

Designed to operate globally, R/V Sally Ride will continue the Scripps legacy of conducting pioneering ocean exploration and research critical to our understanding of our planet, our oceans, and our atmosphere. As a shared-use, general-purpose ship, R/V Sally Ride will engage in a broad spectrum of research in physics, chemistry, biology, geology, and climate science, including research missions with relevance to the Navy.

"Our Navy and Marine Corps depend on detailed prediction of the ocean environment," said Chief of Naval Research Rear Adm. Matthew Klunder. "The new knowledge provided by our basic and applied research is critical for improvements to prediction systems. The research vessel Sally Ride will enable that research and represents the continuation of a long and fruitful partnership among the Navy, Scripps Institution of Oceanography, and the larger ocean science community."

"I'm very proud that the new research vessel Sally Ride will be homeported in California at San Diego's world-renowned Scripps Institution of Oceanography," said U.S. Sen. Dianne Feinstein, D-Calif. "The ship will enable the next generation of researchers to engage in ship-based research science and training and provide the Navy with a world-class research platform. This is an excellent example of the importance of investing in basic research to support national capabilities and competitiveness."

"Dr. Sally Ride inspired millions of people, especially young women and girls, to reach for the stars," said U.S. Sen. Barbara Boxer, D-Calif. "Naming the Navy's new ocean research vessel in her honor is a fitting tribute to her legacy of innovation and discovery, and I am so pleased that this ship will be based at a great California institution that she loved, the Scripps Institution of Oceanography."

"Achievements such as Scripps's research vessel Sally Ride show us how important investments in our military and scientific communities are," said U.S. Rep. Scott Peters, D-Calif. "This vessel, and the rest of the academic research fleet, enables seagoing research that aids scientific discovery and our national security."

"I can't think of a more perfect name for the Navy's new research vessel. Dr. Ride was a trailblazer in every sense of the word in the fields of science and engineering. Dr. Ride's namesake ship and its crew will continue her legacy of courage, determination, and spirit of discovery," said U.S. Rep. Susan Davis, D-Calif.

As a seagoing laboratory supporting research and education, the new ship will feature modern research instrumentation to fuel scientific exploration, including mapping systems, sensors, and profilers that will investigate features from the seafloor to the atmosphere.

Scripps's seagoing operations contribute significantly to the region's maritime economy, drawing from the region's exceptionally skilled workforce and employing more than 150 skilled technicians, engineers, crew, and administrators for ship operations. The more than $28 million generated annually from external funding sources for Scripps fleet operations is reinvested by the university into the local San Diego and regional economy.

"The blue economy is the next big thing for San Diego and having this research vessel in our port will be a tremendous opportunity to showcase that," said Greg Cox, chairman of the San Diego County Board of Supervisors. "Scripps is a research powerhouse and I'm thrilled about the potential economic benefits of better understanding our oceanographic systems."

For more than a century, Scripps has been a part of the University California and its ships have benefitted from key support from the UC System and UC San Diego. As with other Scripps research vessels Roger Revelle, Melville, New Horizon, and Robert Gordon Sproul, R/V Sally Ride will allow early career scientists to engage in ship-based science and training to support the next generation of researchers. The ship will participate in the UC Ship Funds Program, a unique resource that allows University of California graduate students to proposes, design, and execute their own research programs at sea.

Thousands of scientists, students, and government researchers use Scripps research vessels every year, making them the most widely used oceanographic vessels in the United States. Scripps operates one-fifth of the research vessels in the U.S. academic research fleet, and over the past four years Scripps ships carried nearly 4,200 people to sea. About half of these scientists are from Scripps and other University of California campuses, and the other half affiliated with other U.S. academic institutions, government laboratories (NOAA, Navy, etc.), international research laboratories, and K-12 schools. Scripps has operated research vessels since 1904, and is a charter member of the University-National Oceanographic Laboratory System (UNOLS), which coordinates academic fleet activities.

The new vessel will be the third in the Scripps fleet that is owned by the U.S. Navy and managed by the Office of Naval Research, joining research vessels Melville and Roger Revelle as well as research platform FLIP. Scripps Associate Director Bruce Appelgate, head of Scripps Ship Operations, notes that the Navy funds about 30 percent of the work done on Scripps vessels for basic research with relevance to Department of Defense (DoD) operations. The new vessel will ensure that the seagoing collaboration will continue 30 to 40 years into the future. Funding for research expeditions aboard the Scripps fleet is also provided by the National Science Foundation, NOAA, and the U.S. Geological Survey.

"Scripps-operated research vessels are ideal platforms for many kinds of DoD-relevant research, and are available for Navy use," said Appelgate. "We are able to work closely and flexibly with our Navy research partners to provide quick and efficient access to the sea, whether for a day trip out of San Diego or a multi-week cruise."

R/V Sally Ride is currently under construction at Dakota Creek Industries Inc. in Anacortes, Wash., and is scheduled for launch in 2015, with routine scientific operations commencing in 2016 following installation of instrumentation and sea trials. 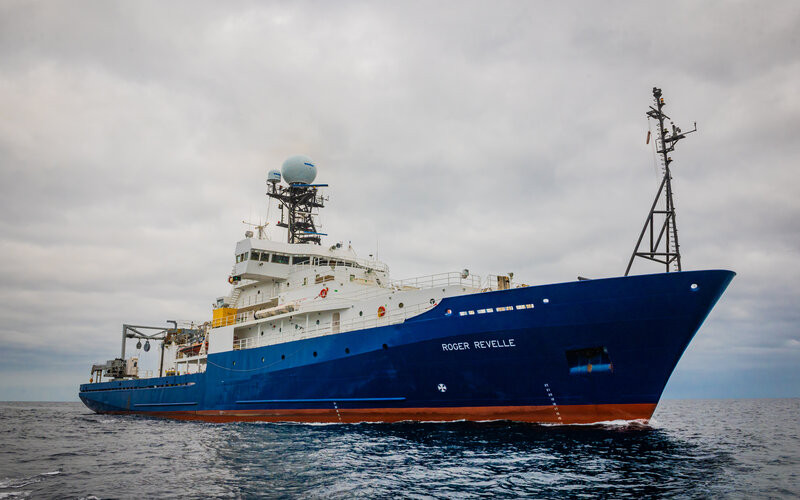